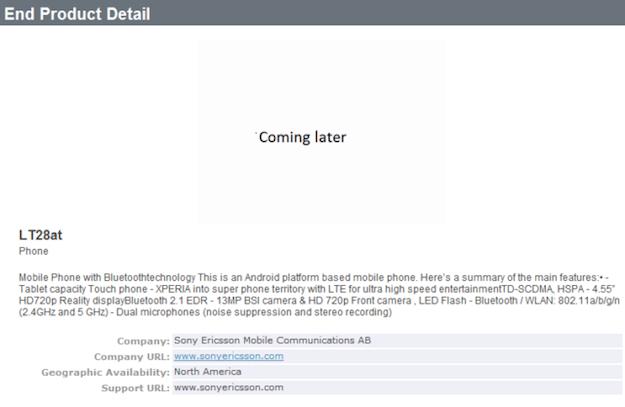 A new smartphone from Sony Ericsson has been revealed through its Bluetooth certification entry, and rather than being another for the European networks, it’s listed as a North American model only. The LT28at will be coming to AT&T and will connect to their LTE high-speed network.

While it’s not the first phone to be leaked via Bluetooth’s site, the blurb features an unusually high level of detail. Described as a “tablet capacity super phone”, the LT28at will feature a 4.55-inch Reality Display touchscreen with a 720p, HD resolution. Sony Ericsson’s Reality Display screens can also be found on the Arc and Arc S phones, and it uses Bravia software enhancements to produce vivid colors and and sharp images.

The LT28at will also have a massive 13-megapixel camera that can also shoot 720p video. A series of images said to be taken with the camera have also been leaked, and even after being published on the web in a condensed form, still look absolutely fantastic.

Google Android is going to be the LT28at’s operating system, but which version hasn’t been stated, and a 1.5Ghz dual-core processor has also been linked to the new device. Other features include a forward-facing video call camera lens, Wi-Fi, Bluetooth (obviously) and dual microphones for noise suppression.

There are similarities here with the LT26i, codenamed Nozomi, which is also likely to feature a 1.5Ghz processor, but a slightly smaller 4.3-inch touchscreen.

It seems logical to expect the LT28at to make its debut appearance at CES in January.