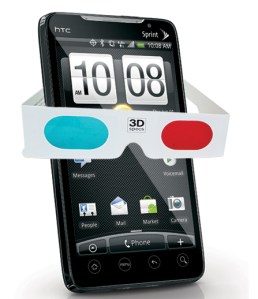 A wealth of alleged details about Sprint’s upcoming handset lineup has emerged prior to the wireless carrier’s official announcement at the CTIA Wireless 2011 conference, which (pre-)kicks off on Monday, March 21, in Orlando, Florida.

According to a source who spoke with BRG:

The first big unveil for Sprint “most certainly will be” the HTC EVO 3D smartphone, the successor to the EVO 4G. It will run on Android 2.3 (Gingerbread) with the HTC Sense user interface.

Measuring 4.3-inches, the EVO 3D sports a 960×450 resolution touchscreen with Autostereoscopic 3D display capabilities — the newfangled type that doesn’t require the use of glasses.

The guts of the device, which runs on Android 2.3 (Gingerbread), include a 1.2GHz dual-core Qualcomm 8660 Snapdragon processor and a 1730mAh battery. (The device probably has 1GB of RAM and 4GB of ROM memory, but BRG says its source switched the numbers around when he gave the specs.)

In front  the EVO 3D has a 1.3-megapixel camera for video chat. On the back are two 5-megapixel cameras, which enabled users to shoot footage in 3D. It can also output regular ol’ two-dimensional video at 1080p, or 3D video at 720p high-resolution, via an HDMI port. The device will also have access to both YouTube 3D and Blockbuster 3D on-demand apps.

In addition to the EVO 3D, Sprint will allegedly add the HTC EVO View 4G tablet to its roster. The 7-inch device is said to be “much like the HTC Flyer tablet” that debuted at Mobile World Congress 2011. It has a 1024×600 display, aluminum unibody design, and HTC Scribe for optional pen usage.

Like the EVO 3D, the View 4G runs on Android 2.3 Gingerbread, with a HTC Sense UI that’s optimized for tablets. It has a 5MP camera in back and a 1.3MP camera in the front. The phone also has a 4000mAh battery, DLNA and HDMI output.

Outside of the CTIA timeframe, Sprint is said to launch three additional tablets: The Motorola Xoom, and two versions of the BlackBerry Playbook (one Wi-Fi-only, the Wi-Fi/WiMax 4G).