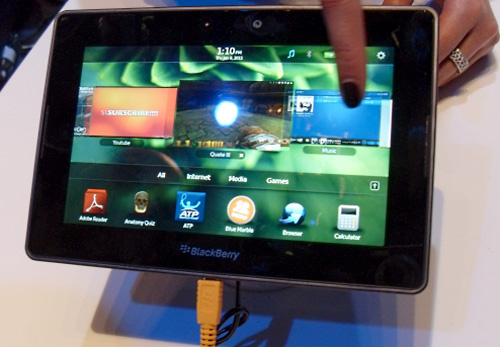 We were impressed with the RIM PlayBook tablet at CES. It has enviable multitasking abilities, not to mention its speed. But apparently, the device has some daunting challenges a former RIM employee recently pointed out to Business Insider.

According to Raymond Reddy, who was previously involved in RIM’s corporate development and M&A, developers might want to hesitate before starting projects for the PlayBook. Reddy himself owns and operates a music software company that he says he will initially drive towards Android tablets, and he doesn’t think he’ll be the only one. At launch, there will be a scant amount of third-party apps since RIM will have to persuade developers to create apps for the PlayBook’s QNX operating system, a major transition from the traditional BlackBerry OS. On the flipside, since the PlayBook is the first tablet to fully support Flash, this opens up a whole new realm for developers.

Reddy also warns the device might not make its launch date. While the QNX OS is responsible for the PlayBook’s heightened performance, it’s also apparently been more difficult than expected to adopt the previous UI to the tablet. Which leads to the largest issue: the Wi-Fi version will not have access to corporate BlackBerry e-mail. One of the PlayBook’s crucial features has been its productivity functions. Reddy told Business Insider that the BlackBerry crew first told him this, saying it’s for security reasons.

The tablet is supposed to be available in early 2011, so we’ll soon find out if RIM is able to deliver with the PlayBook.

Video-editing app LumaFusion to get a Galaxy Tab S8 launch
The best iPhone apps to download in September 2022
The best Android apps for September 2022
The best free music apps for iOS and Android
Seeing more ads in your Outlook app? You’re not alone
The best Samsung Galaxy Tab S8 keyboard cases
Apple AirPods Pro 2 vs. Samsung Galaxy Buds 2 Pro
How to add multiple wallpapers and change your home screen on iOS 16
The best touchscreen laptops for 2022
Which $1,000 phone has the better camera — iPhone 14 Pro or Galaxy Z Flip 4?
How to change the time font on your iOS 16 lock screen
How to use iOS 16 photo cutout to cut and paste images
The best selfie apps for iOS and Android