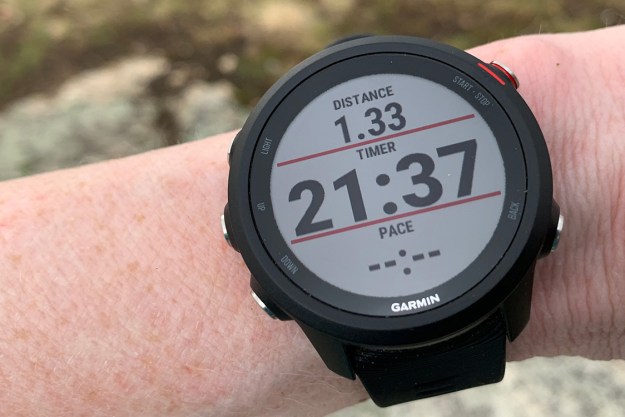 “New metrics, onboard maps, and music prove to be a killer combination in the Forerunner 245 Music.”

One of Garmin’s most popular running watches just got an upgrade. The Garmin Forerunner 245 is a step up from the Forerunner 235, bringing improved running metrics, full-color breadcrumb maps, music, and a stylish new design.

I’ve been running with the Forerunner 245 to see if these upgrades are as remarkable in real life as they sound on paper, and the short answer is yes — this is yet another well-rounded, though a bit expensive, fitness watch from Garmin. Keep in mind, this is very much a watch for runners and not necessarily the best option for casual athletes — the Fitbit Charge 3 is a much more affordable option for people who don’t need all the bells and whistles, but just want a reliable tracker.

Put the Forerunner 235 next to the new Forerunner 245, and you’ll be surprised to know they come from the same family. Garmin did away with with the plastic-y feel and replaced it with a sporty and tough fiber-reinforced polymer casing. It also shrunk down the 245, making it smaller at 42mm but slightly thicker at 12.2mm (the Forerunner 235 was 45mm, and 11.7mm thick).

The watch face on the Forerunner 245 is an ideal size; it fits both small and large wrists without looking out of place. The watch has a sporty look that works for most casual occasions, but once you hit semi-formal or formal dress attire, you may want to swap it out with something a bit more elegant. In my opinion, it beats the look of most fitness trackers.

The silicone strap has been upgraded too. It now has a quick-release band that feels soft against your skin and textured on the outside. The 20mm band is perforated, so it breathes when you workout and adjusts to fit a wide range of wrist sizes. The band is durable and fits securely, though perhaps almost too securely. Similar to the Forerunner 945, the rubber loop that fastens the strap is snug, making it difficult to loosen it quickly.

While Fitbit and Apple have opted for touchscreen interfaces, Garmin stays firmly attached to its sunlight-readable color display and five-button navigation. The display is covered by a layer of Corning Gorilla Glass 3, which is scratch-resistant and an improvement over the chemically-strengthened glass of the Forerunner 235.

The 1.2-inch display on the Forerunner 245 is about the same size as its predecessor, but it has a higher resolution (240 x 240 pixels), which makes content look crisp. It also gets bright enough to easily read the screen in direct sunlight, at night, or when running.

The buttons on the Forerunner 245 are slightly raised from the bezel, making them easy to press. Each button has a label for its function, though the labels are difficult to read. Thankfully, it doesn’t take long to figure out what each one does. The start/stop button has a red ring and a red line on the bezel so you can find it easily even in the middle of a workout. It also is slightly more raised than the other buttons.

I wore my watch under a light rain jacket and had no problem pressing the start/stop button through the jacket fabric.

The aesthetic changes in the Forerunner 245 are nice, but the improved tracking is where Garmin’s new Forerunner watch shines. I used to be content with my Forerunner 235 and the metrics it collected until I started testing the Forerunner 245. Now that I have gotten a taste of measurements like anaerobic training effect and training load status, I don’t want to go back.

Overall, tracking has been spot on. The watch has Garmin’s latest heart rate sensor and pulse oximeter, and the sensors sit flush on the back of the watch so you don’t even notice they are there. Distance, heart rate, and the GPS track results were similar with the other smartwatches and devices I used in testing, including the Garmin 645, Garmin Fenix 5X Plus, Suunto 9 and the Polar H10 chest strap.

Elevation tracking is the biggest disappointment with the Forerunner 245, and that’s because it’s calculated using GPS track and map data and not recorded by the device as there’s no barometric altimeter. I typically run a hilly course that gains about a 1,000 feet in a couple of miles.The Forerunner 245 was consistently lower on elevation than any of the altimeter-equipped devices both during and after a run. At the end of a recent three-mile run, for example, the Forerunner 945 recorded 984 feet of elevation gain, while the Forerunner 245 calculated it to be 860 feet. It’s not terribly far off, but I wouldn’t call it reliable.

Another welcome feature in the Forerunner 245 is mapping. When you are in the middle of an outdoors workout, you can scroll to the map data screen and see your GPS track on a map. It’s not a topographical map, you’ll have to buy the Forerunner 945 for that, but is a breadcrumb map that shows your current location with an arrow and the GPS track from your current run or a pre-loaded run.

You can use the built-in compass (also new in the Forerunner 245) and your GPS connection to follow the track. It gave me the confidence to explore new trails knowing I would not get lost.

The Garmin Forerunner 245 is available in a music version which allows you to store up to 500 songs on the watch as well as sync to Spotify or Deezer. But getting the music transferred over to your watch is not as easy as it should be. Some of the steps are done on a computer, and some on the watch. It’s not intuitive so you may need to follow the manual. Thankfully, once you finally get the music on the watch, you’re good to go.

I used the Forerunner 245 with a pair of Aftershokz Bluetooth headphones and the experience was problem-free. Once I connected my headphones, the watch remembered them and asked to connect them when as I turned on my music. I could control playback and adjust the volume from the watch, allowing me to keep my phone stowed safely in my running vest (I could have left it home if I stored music, too).

Like most of Garmin’s watches, the Forerunner 245 tracks your health and wellness in addition to the fitness performance metrics. It tracks your heart rate 24/7, allowing you to monitor resting heart rate, a valuable metric that can be used to gauge fitness level as well as tell when you are getting sick.

The Forerunner 245 also tracks your sleep and is as accurate as any other smartwatch we have tested. It accurately detected my sleep and wake times and even recorded moments in the middle night when I woke up to grab a blanket or adjust my pillow. It breaks down sleep into stages: deep, light, REM and awake.

It also detects movement and records oxygen levels thanks to the included pulse oximeter. This oxygen level can be used to detect sleep apnea and other sleep disturbances, but I found the values were difficult to interpret, and there’s not really much support here anywhere from Garmin.

Garmin’s Forerunner series may be focused on running, but that’s not all these watches can do. The Forerunner 245 is a smartwatch and a highly customizable one at that. The watch has a variety of widgets that show the weather, your last workout, notifications, heart rate, step count and more You can cycle through these widgets and add, move or remove them to suit your needs.

Notifications from your connected mobile phone are sent to the watch, where you can read and delete them. Each notification contains a portion of the incoming alert and the app that sent it. At a glance, I can tell whether its an email, a Facebook message or a Trello notification. The watch displays just enough information so I know whether I need to take out my phone and respond right away or wait until later.

When you are in the middle of a workout, alerts are still sent to the watch, but they only occupy a small slice of the screen at the top. It will not block the data screen so you can track your workout without interference. Unlike an Apple Watch or Samsung Galaxy Watch, you cannot make phone calls, and there’s no voice assistant to help with any queries. You can’t even respond to notifications from the watch — though that’s only if you’re using it with an iPhone. If you connected the watch to an Android phone, you can respond to some notifications with preset messages.

Battery life in the Garmin Forerunner 245 is a mixed bag — compared to other fitness watches, even some of Garmin’s other watches. The company improved the battery life in GPS mode — delivering up to 24 hours which will cover you for a 50-mile or possibly even a 100K race. The Forerunner 245 has UltraTrac mode which periodically turns off GPS to preserve the battery and uses the accelerometer to measure distance.

In smartwatch mode, which covers typical daily use, the battery life decreased from 9 days in the Forerunner 235 to seven days in the Forerunner 245. In my real-world testing, I had to charge the battery after five and half days with 24/7 heart rate tracking, sleep tracking, notifications and five GPS workouts totaling 8 hours. Now that’s still far better than what you’ll find with watches like the Apple Watch or Samsung Galaxy Watch Active, but it’s still a step below some of Garmin’s own alternatives.

The Garmin Forerunner 245 is available now for $300 from Garmin, REI, and other online retailers. Adding the music feature bumps the cost by $50 (Forerunner 245 Music).

Garmin products are warranted to be free from defects in materials or workmanship for one year from the original date of purchase.

The Garmin Forerunner 245 is a well-rounded fitness smartwatch that tracks all the important metrics that are geared toward the semi-serious to serious runners. The only area the watch stumbles is in elevation measurements — without a barometric altimeter, elevation tracking is not as accurate. If you mostly run mostly on flat areas or don’t track your vertical gain, then this omission is not a deal breaker. If you run mountains, you may be disappointed.

Yes. If a barometric altimeter is a must-have, then you’ll need to spend a bit more cash to upgrade to the Forerunner 645 or the Forerunner 945. The 645 has the same core features of the 245 with the addition of the altimeter and gyroscope, while the 945 is a fitness tracking machine used by serious, number-crunching runners.

Yes. You should buy the Forerunner 245 if you are run regularly and want to start tracking more than just the basics like pace and distance.