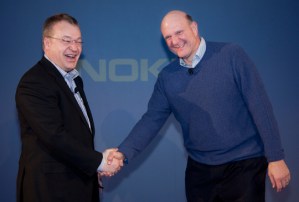 It ain’t exclusive, but Nokia has chosen to hitch its pack to Microsoft for the long smartphone race ahead, confirming rampant rumors of a partnership. In the first of two press conferences in London today, Nokia CEO Stephen Elop announced and explained Nokia’s decision to heavily partner with Microsoft to deliver a joint Nokia and Windows Phone 7 experience that he hopes will help both companies rise to the challenge and battle Apple’s iOS and Google Android in the United States and around the world.

“We believe this is good for Nokia,” said Elop. “It represents a next-gen platform upon which we can attach our innovation…It gives us a faster path to the United States Market place….We also think this is good for Microsoft. It gives them a faster path to global market. It gives them a role to leading devices. It allows them to focus on areas where they can differentiate.”

Though a finished agreement is still pending, Microsoft CEO Steve Ballmer joined Elop on stage to affirm Microsoft’s commitment to the partnership. He explained that though Nokia will not be the exclusive vendor for Windows Phone 7 devices, the two will work together on development and marketing initiatives.

“This partnership with Nokia will accelerate, dramatically accelerate Windows phone ecosystem,” said Ballmer. “We need to and we will collaborate closely on joint development and joint marketing initiatives. Nokia’s location and mapping services will improve our joint experience and help deepen the access and information in our Bing service. Nokia will work with us on hardware advances and work on its own unique hardware advances. This partnership is good for Microsoft and its good for Nokia.”

No official handsets were announced at the event, though Ballmer said that engineering teams have been working extensively together for some time. A question on tablets was asked, to which Elop answered that no tablet plans were being discussed today, but if Microsoft had specific new plans for tablets, Nokia would be able to take advantage of these plans.

Nokia released this fancy chart to explain how the companies will work together. Microsoft will provide the platform and a number of services like adCenter, Bing, Office, etc, but Nokia will also contribute some of its stronger services like the Ovi portal and Nokia Maps, which will be integrated into Microsoft’s search engine and become a “core part of Microsoft’s mapping services.” Due to the symbiotic nature of the relationship, Elop hinted that Nokia is getting a discounted, if not free, rate on Windows Phone 7 licensing, but would not discuss specifics.

Nokia had other options. At the conference, Elop explained why Nokia chose WP7 for smartphones over its own internally developed MeeGo OS, noting that it would take too long to bring MeeGo to market. The Finnish company will release a single MeeGo handset later this year for its own exploratory and research purposes, but then the MeeGo team will be repurposed to focus on Windows Phone 7 and other future OS advancements.

When asked about moving to Android instead, Elop said that Nokia “explored the opportunity with the Google ecosystem,” but decided that it would be too hard to differentiate properly and deliver unique innovation in such a crowded marketplace of Android devices, though Windows Phone 7 offers much greater collaborative possibilities and fits in with Nokia’s strengths.

When asked about the transition from Symbian to Windows Phone 7, Elop said that the company has about 200 million Symbian users and expects to ship about 150 million more lower-end Symbian devices as it transitions to Windows Phone 7 in the coming months and years. It is working with MS to drive down the cost of WP7 devices so that it can slowly work the OS into lower end phones and developing markets around the world.

Regaining footing in the U.S.

When asked about the U.S. market, Elop and Ballmer commented that though both Nokia and Windows Phone 7 have struggled in North America, working together will be beneficial. Elop commented on the hope that wireless carriers will support a third operating system in the market if it has the broad support of a company like Nokia. The partnership also gives Nokia “faster access to the market with a competitive product. “This is now a three horse race,” said Elop.

Nokia will have another press briefing in a bit which will outline more of its plans for Symbian and restructuring.

UPDATE: Click to read about Nokia’s second WP7 press conference. The company outlines its restructuring efforts, financials, and further clarifies how its relationship with Microsoft will work.

Topics
Video-editing app LumaFusion to get a Galaxy Tab S8 launch
Windows XP running on an iPhone 7 is just as slow as you remember
Microsoft may reduce its Windows 10 licensing fee for OEMs to combat Chromebooks
The best apps every Windows Phone user should have
The largest police force in the U.S. shuns iOS and Android, goes with Windows Phones
LastPass vs. 1Password: should you switch?
Samsung Galaxy S23 Ultra vs. iPhone 14 Pro Max: Apple better watch out
The best Samsung Galaxy S23 Ultra pre-order deal we’ve found
These 5 features turned my iPad into a shockingly good computer
Samsung Galaxy S23 vs. Google Pixel 7: there’s a clear winner
The Galaxy S23 upgrade I’m most excited about is one you can’t see
Apple hints at cunning plan to make you spend even more on an iPhone
Google Pixel Watch is back down to its Black Friday price