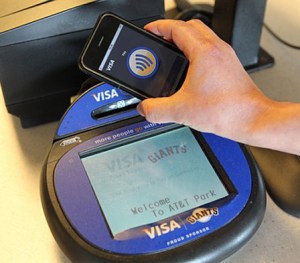 New rumors suggest that, much like Google and Apple, Microsoft may be working on its own mobile payments software for Windows Phone 7 using the popular Near-Field Communications (NFC) technology. The software would be integrated into a future version of the mobile OS and is intended to help Microsoft keep pace with Android and iOS. However, Redmond may move a bit faster with the technology. Bloomberg reports that the first WP handsets with NFC built in may be released this year.

NFC is a new, more secure wireless payment system that allows a device to be flicked past or held about 2-4 inches from a reciever to make a payment, much like many credit card companies touted RFID-equipped cards (which are very insecure) a few years back. Some gas stations and grocery stores still have the little wireless payment receivers on top of the credit card machines, but the technology has not caught on as fast as some had hoped. Wireless carriers and platform operators are hoping that NFC technology could help phones become the next credit cards.

However, though NFC integration seemed imminent a few months back, more recent rumors indicate that it may be a while longer before Google and Apple fully integrate NFC, giving Microsoft a head start, should it move quickly. Google is preparing to test its mobile payments system in New York City and San Francisco within the next four months, and has signed deals with Mastercard and Citigroup. In Europe, Deutsche Telekom (who recently sold T-Mobile to AT&T) announced in February that it plans to aggressively roll out NFC payments this year.

It looks like NFC may launch on almost every major smartphone platform in the next year or two. Are you ready to give up that credit card and start swiping your phone to pay?

Topics
Video-editing app LumaFusion to get a Galaxy Tab S8 launch
The best iPhones in 2023: which one should you buy?
Why the Apple Card remains my favorite credit card in 2023
Motorola’s ThinkPhone is the coolest phone of CES 2023 — but you can’t buy it
In 2023, it’s time to finally ditch your real wallet for Apple Pay
The best rugged smartphones for 2023
The best iPhone games in 2023: 31 games you need to play right now
This Apple leaker just revealed tons of changes for iOS 17 and iPhone 15
Beats Studio 3 headphones are $120 off today at Amazon
How to cheat in Words With Friends
Trading in your iPhone with Apple? You’ll get less than yesterday
The best QR code scanning apps for iPhone and Android in 2023
3 reasons you should buy the Google Pixel Watch today