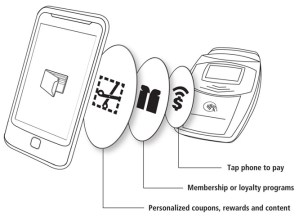 Google will soon begin to test a plan that allows customers in New York City and San Francisco to make payments using their only mobile phones, reports Bloomberg.

According to “two people familiar with the project,” Google will finance the instillation of “thousands” of enabled cash-register systems from VeriFone Systems Inc. at select retail locations. These registers would accept payments from cell phones equipped with near-field-communication (NFC) technology. The sources say Google plans to launch the plan within four months.

NFC technology allows users to simply tap their cell phone on the NFC register to pay for products or services. It serves as an alternative to cash or credit cards. According to Bloomberg, Google’s NFC service “may combine a consumer’s financial account information, gift-card balances, store loyalty cards and coupon subscriptions on a single NFC chip on a phone.”

Google’s plans coincide with increased use of NFC technology in general. Deutsche Telekom announced at this year’s Mobile World Congress that it will begin to roll out NFC-based “mobile wallet” technology throughout Europe this year, and will expand the technology’s implementation to the United States in 2012, through its subsidiary wireless company T-Mobile USA.

If Google brings its NFC plan to fruition, it could face stiff competition from competing systems backed by a variety of companies, including those of eBay, PayPal and ISIS, which is supported by AT&T and Verizon Wireless.

Of course, for any NFC plan to work, customers must have NFC-enabled phones at their disposal. The Nexus S and Galaxy II smartphones from Samsung are among the few NFC-capable devices currently available in the US. Blackberry-maker Research In Motion has said it will begin implementing the technology into its devices as soon as possible. Apple says it will not include NFC technology in the upcoming iPhone 5.

Topics
Video-editing app LumaFusion to get a Galaxy Tab S8 launch
The Galaxy Z Fold 4 isn’t just a good phone — it’s also my favorite computer
Trading in your iPhone with Apple? You’ll get less than yesterday
This Apple leaker just revealed tons of changes for iOS 17 and iPhone 15
The best rugged smartphones for 2023
Yes, we really are completely spoiling the OnePlus 11 and Buds Pro 2 launch
The best iPhone games in 2023: 31 games you need to play right now
Beats Studio 3 headphones are $120 off today at Amazon
How to cheat in Words With Friends
The best QR code scanning apps for iPhone and Android in 2023
3 reasons you should buy the Google Pixel Watch today
This is the OnePlus Pad — the OnePlus tablet we’ve waited years for
My iPhone 14 Pro camera is ruined, and it’s all Apple’s fault