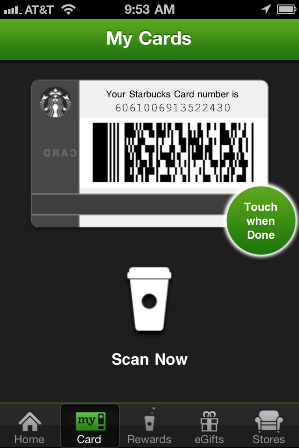 Jonathan Stark is a mobile application consultant and expert who, according to his own site, helps “big companies with little apps.” In June, he wrote that he was trying to familiarize himself with the mobile wallet and mobile payment system as much as possible, and offered a short review of the Starbucks app. Then, taking things even further in his mobile payment experiment, he broadcast his card to the world and told them to use it and see how all anyone needs to buy anything (well, in this case, coffee) is an image.

Now what started as a simple test to see the effects of broadcasting currency and sharing a mobile payment system has gone viral. Stark has created a dedicated site and Twitter account for his Starbucks card and is asking anyone and everyone to download an image of the card to buy coffee. “Seriously. My card gets charged, you don’t,” he says. Of course, if you want to pay it forward, you can also add to the card. “Based on the similarity to the ‘take a penny, leave a penny’ tray at convenience stores in the US, I’ve adopted a similar ‘get a coffee, give a coffee’ terminology,” he says.

It’s quickly becoming a viral phenomenon, revealing the effects of sharing goods and e-currency via the mobile wallet. All you have to do is save the above image to your smartphone and scan it at any Starbucks nation-wide. We decided to give it a test-run this morning, and first checked the card’s Twitter account (yes, the card’s) to see how much was on it. It said about $31, so we high-tailed it down to the building’s lobby Starbucks, stood in line, and were told there was $1.30 on it. Makes sense: With the lure of free coffee and nothing but guilt to keep people from adding to the card, it’s bound to empty quickly. But just as we were about to start a lecture on game theory and how collective good is completely fallible, the barista told us he meant $130. Oh.

So there you have it: Free coffee and the option to experiment with a public mobile wallet. We’d like to say that in the interest of good karma, users will add to the card, but it seems way too easy for one greedy Starbucks addict to empty the thing and stock up on coffee supplies for the next month. And last time we checked, it was empty. Hopefully there’s a generous soul willing to keep the giving going.

Topics
Video-editing app LumaFusion to get a Galaxy Tab S8 launch
Is Snapchat free? Here’s how much you’ll need to pay for it
This Visible signup deal lets you choose your own gift card up to $300
How to add coupons, gift cards, and loyalty cards to Apple Wallet
Pay for 3 months and get 3 months free thanks to Mint Mobile’s latest offer
Yes, we really are completely spoiling the OnePlus 11 and Buds Pro 2 launch
The best rugged smartphones for 2023
The best iPhone games in 2023: 31 games you need to play right now
This Apple leaker just revealed tons of changes for iOS 17 and iPhone 15
Beats Studio 3 headphones are $120 off today at Amazon
How to cheat in Words With Friends
Trading in your iPhone with Apple? You’ll get less than yesterday
The best QR code scanning apps for iPhone and Android in 2023