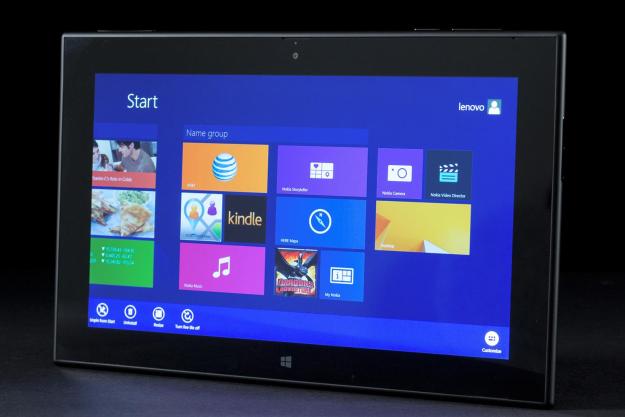 “The Lumia 2520 is superior to the Surface 2 in a few ways, but as a Windows RT tablet priced at $500, it doesn't come close to matching the equally priced iPad Air in usability or app selection.”

This is likely the first and last Windows RT tablet from Nokia. Nokia has sold its phone and hardware business to Microsoft, and plans to leave the business it helped create behind. The Lumia 2520 is also probably the only RT device outside of the Surface 2 we will see this year, because no manufacturers seem willing to make a Windows tablet that isn’t compatible with older Windows 7 applications. Because RT devices don’t run on Intel chipsets, and instead work on ARM hardware more typically seen in phones and tablets, only Microsoft’s best friend Nokia was willing to give it a go. The question is: How does the Lumia stack up to the Surface 2 and other tablets? Read on to find out.

A superb-looking tablet that feels great

Before we start ripping on Windows RT 8.1, we should note that Nokia has done its job well. The Lumia 2520 is one of the best looking 10.1-inch tablets around. Though the 8-inch screen size is the most comfortable for a tablet, Nokia has made the best of its larger screen, with comfortably round edges and a soft matte coating that comes in black, blue, or red.

The 2520 gets better battery life than Surface 2 and most other competitors.

It’s relatively thin and light too, at only 615 grams (1.3 pounds) and 8.9mm (.35 inches) thick. It’s not the thinnest or lightest tablet around, but it’s in the ballpark – though the new iPad Air outshines it by shedding an extra third of a pound, and a millimeter and a half. But if you’re comparing this to the iPad Air, just go buy Apple’s tablet. It’s more likely to satisfy you for a number of reasons. For those of you still reading, let’s move on.

The front-facing speakers on the Lumia 2520 are particularly impressive. Most tablets tend to shoot sound from the rear or bottom, but the Lumia blasts it right in your direction and, for a tablet, it’s relatively clear and can reach a decent volume. Again, kudos to Nokia for its hardware design.

The power and volume controls in the upper right and are easy enough to reach when you hold the tablet in its intended landscape (widescreen) orientation. The headphone jack is way over on the left side, as is the most annoying port on the tablet: the custom charging port. Sadly, to charge the Lumia 2520, you need a proprietary charging cable – there’s no way to charge via Micro USB, like your phone. If that’s a deal breaker, there are many Android tablets that do charge via Micro USB, like these.

On the plus side (also the right side), there is a brand new Micro USB-AB (USB 3.0) port for data transfer and a Micro HDMI port.

At 1920 x 1080 pixels, the Lumia 2520’s LCD screen is gorgeous and gets plenty bright. Gorilla Glass 2 covers it so the 2520 can withstand some light abuse. On the inside is a top-notch ARM tablet. It runs on Qualcomm’s industry-leading Snapdragon 800 quad-core processor, running at 2.2GHz. 2GB of RAM, a MicroSD card slot capable of holding a 64GB card, and 32GB of internal file storage are included.

The Lumia 2520 packs an impressive 8,120mAh battery. It lasts for a long time on standby (several weeks, for us) and we achieved between 11 and 12 hours on a charge, which beats the 7 to 9 hours most tablets get by a good deal. This tablet gets better battery life than most of its competitors.

But it still runs Windows RT

(This section is taken almost verbatim from our review of the Surface 2 because, well, for better and worse, the Lumia 2520 provides the same experience. Both run Windows RT 8.1.)

With Windows RT 8.1, Microsoft has made a lot of upgrades to the Start screen and its entire Windows 8 interface. It’s easier to get to your apps list (just swipe up); there are now extra small and extra-large Live Tiles; the Windows Store looks a lot cleaner and has a few good apps; and split-screen multitasking now works. Encouraged by our happiness with the Start screen, we entered the simple PC Settings menu, which shrunk the size of our Live Tiles, allowing us to fit more on the screen. Unfortunately, we weren’t able to open up three apps at a time in the multitasking menu, like we could with the Surface 2. Still, with a crisp 1080p screen, everything looks great on the Lumia 2520.

The odd mismatch between the new interface and old desktop is still the problem with Windows 8.1.

The Start screen is much improved, but a year into Windows 8, the desktop still isn’t user friendly on a touchscreen, or any small screen. A bug that previously rendered the desktop extremely small when you decreased the size of the Start screen tiles has been fixed.

The odd mismatch between the new interface and old desktop is still the problem with Windows 8.1. Microsoft created a nice new interface for the Start screen, but has still, more than a year into Windows 8, failed to make its desktop user friendly on a touchscreen, or small screen. The desktop looks almost exactly like it did in Windows 7. Using it with your fingers is difficult because it isn’t made for fingers. Crunching that untouchable interface down into a 10.1-inch tablet screen (even smaller than the 10.6-inch Surface 2 screen) makes it that much worse.

You can get used to the desktop, but it’s never fun to use. It makes us wonder why Microsoft felt the need to include it at all. Like the Surface 2, this isn’t a Windows machine. It looks like Windows, but it doesn’t run classic Windows software. Windows RT is built for ARM (smartphone/tablet) processors and won’t run iTunes, Photoshop, Spotify, Chrome browser, Firefox browser, or any other programs you like to use on Windows. They’re incompatible. Microsoft’s inability to move its own software to the new Start screen interface is the only reason you have to endure torture. Word, Excel, PowerPoint, OneNote, Outlook (new), and folder access are only available on the desktop. And they feel like they’re built for the desktop too, because they’re clunky and only minimally touch friendly.

Browsing the Internet is also a confusing affair. There are two versions of Internet Explorer on the Surface (and every Windows 8 device). One of them is made for the new interface and it’s touch-friendly, but not great for multitasking or having multiple tabs open. We can’t figure out how to have multiple browser windows open, so we can’t use the clever new split-screen mode either – that is, unless we also use the desktop version of Internet Explorer. This version is functional but the menus are small and not fun to use with your hands.

Like all Windows 8 products, the Surface 2 forces you to choose: Do you want productivity, or do you want an intuitive interface? Microsoft desperately needs to figure out how to blend these ideas. Its first step should be to eliminate the desktop on Windows RT. We don’t have to pretend that both versions of the Surface are full-blown PCs. This isn’t a PC. But it is a pretty good tablet.

The best tablets never match the camera prowess of the best smartphones. The Lumia 2520 has a 6.7-megapixel rear camera and a 1.2-megapixel front camera. The front camera works well enough for Skype chats (in a lit room), but the rear camera still doesn’t do much. It will take pictures, but abnormalities like light from a window will throw it for more of a loop than Nokia’s Lumia smartphone cameras. The low-light performance is also poor, as is focusing on close objects. If your room is dimly lit, just give up now because there isn’t even a flash on the 2520.

Again, if you’re buying a tablet to take photos, you’re smoking something. They just aren’t great at it. For basic photography though, the 2520 will do in a pinch.

If you have used Windows 8 and like it, and you’re OK with not installing legacy Windows 7 software, then this is a good tablet option for you. It will run you $500 and an additional $150 if you want a keyboard dock, which puts it at about the same price as the Surface 2. This tablet is just as nice as the Surface, and the price is roughly the same. The screen is slightly smaller, but the battery life is better.

For the rest of you, keep in mind that it’s not easy to use classic Windows features on a tablet (especially without the keyboard dock) and the Windows Store still doesn’t have a competitive selection of apps compared to the Android Google Play Store or Apple App Store. And at $500, it’s hard not to recommend the similarly priced and sized iPad Air because it can do so much more, and there are plenty of decent keyboard cases for it, as well. Most of those cases won’t cost $150 either.

Video-editing app LumaFusion to get a Galaxy Tab S8 launch
Can’t stand using Instagram in 2022? This app fixes everything you hate about it
Google wants you to know Android apps aren’t just for phones anymore
The best ad-blocking apps for Android in 2022
Nreal’s Air AR glasses head to the U.S., ready to rock with iPhones
The best wireless keyboards for 2022
The best wireless earbuds for 2022
Apple rolls out iOS 16 update to fix frustrating camera-shake, paste bugs
Hey look, the iPhone’s Dynamic Island has come to … Android?!?
Why I stopped wearing my smartwatch — and why I haven’t looked back
How to transfer your SIM from an Android phone to an iPhone 14
Google Pixel Tablet leak reveals key specs about the mysterious device
How to buy the new Apple Watch Series 8, SE, and Ultra