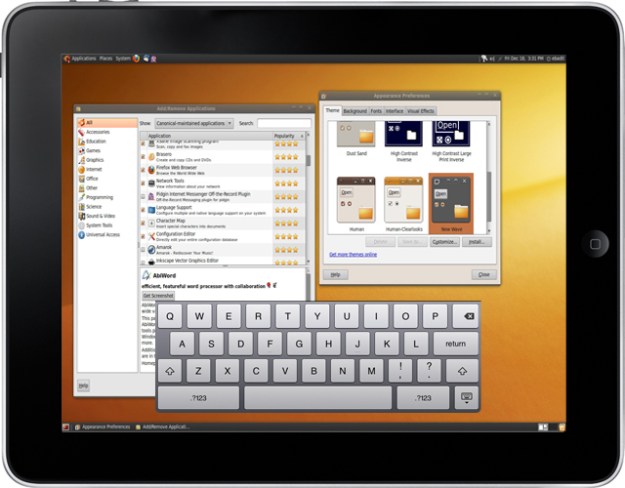 Canonical founder Mark Shuttleworth recently announced that Ubuntu would be making its way to mobile. But a simple announcement from the man who reasoned Ubuntu could put Apple out of business wouldn’t be nearly enough. “By 14.04 LTS Ubuntu will power tablets, phones, TVs and smart screens from the car to the office kitchen, and it will connect those devices cleanly and seamlessly to the desktop, the server and the cloud.”

Anyone who’s relatively technical knows what Ubuntu is. Not you? Well if you’ve used a Mac, then you at least have a basic idea of what Ubuntu looks like. The Linux-based operating system takes many a cue from the simplified, icon-heavy format that has become so synonymous with Apple and given it to the PC masses–for free.

While Linux established open source computing for the mainstream (which is something of a loosely used term in this case given Mac OS and Windows market share), Ubuntu wanted to turn it into something more usable for the masses.

And it’s been doing so for the desktop since its first major release in 2004. Now, Shuttleworth says the PC is not enough and Ubuntu is going mobile. The plans are seemingly long-hatched, as the desktop UI, Unity, was specifically developed to translate across multiple devices and be accessed via touch.

Matthew Helmke, an IT expert who led the team that updated the sixth edition of The Official Ubuntu Book, says there have been hints Ubuntu’s interested in a mobile platform for years. “I think it’s safe to say Ubuntu on mobile is part of a long term plan and not a sudden shift in priorities,” he says. “Consistent, foundation steps have been taken toward this goal for some time, including work on less obvious aspects than the interface, like support for multitouch interaction and making sure that Ubuntu officially supports ARM processors.”

How will it translate?

More than one operating system has weathered an ill-fated transition from the desktop to the palm-sized screen. RIM has struggled with tablets, Windows—a legacy OS brand—had some growing to do before it solidly landed mobile, and Nokia’s Symbian is dead in the water. So how will Ubuntu fare?

“I would say Ubuntu’s strong UI would be a nice starting point for an open-source OS for tablets, and would help break us out of tight vendor-controlled experiences on those devices,” says Webtrends software architect Robin Balmer. He’s right: Every time a new brand antes up, consumers benefit from increased options, and Ubuntu’s strong reputation as a user-friendly and open-source OS could be a powerful blend. It takes Apple’s good (usability, intuitiveness, powerful design) without being spoiled by the bad (a walled garden so concrete consumers have no hope to influence or aid in its growth. IOS knows what you want before you want it; your input is not required).

Balmer admits the transition would not be without its hiccups, however. “We’ve also seen Linux on these devices used lazily, without considering the drastic difference in how phones and tablets are used. The amount of hand-typing configuration required in many Ubuntu tasks would be a real burden for a screen or thumb keyboard.”

Helmke also sees advantages in an Ubuntu mobile OS. “Ubuntu is easier to tinker with than any mobile operating system currently available. Not everyone cares about that; in fact, most people want their devices to ‘just work,’” he says. “However for those who like to modify or customize their software, this could be an exciting opportunity. Communities have risen up around Android customization, for example, Cyanogenmod, which I run on my phone. Imagine the fun that could be had when more of the operating system and programs that run on it are open for community modification, participation in planning and development, and bug fixes.”

While iOS users certainly have an idol-worshiper attitude, Android is more like a cult in other ways. Much of the community is so steadfastly devoted to improving and aiding in the brand’s development, and when you take into consideration that Ubuntu would offer even more of this, it could create just as strong of a following.

“Once people give Ubuntu a try, I think it has a chance to be competitive on features, available applications, and especially on philosophy—for those end users who care about that sort of thing. The positive side of the crowded space is that there is no one system that dominates with a monopoly or near monopoly, and there is no one system that is considered the norm that other must emulate. There is some freedom to try new things and see if your ideas are better received than those proposed by others,” says Helmke.

How will it compete?

Herein lies Ubuntu’s largest hurdle. Bringing a Linux-based operating to the market isn’t novel: That’s what Android is—and it’s got Google backing it and some pretty powerful market status to boot. Not only is the competition something to be considered, but introducing an OS that is typically considered ‘for techies only’ is a challenge.

“The big obstacle is going to be convincing non-technical users that Ubuntu is worth considering, especially in an area as crowded as mobile device operating systems,” says Helmke. “Competing for mind space and consideration against Apple products, Android, and even smaller market share players like BlackBerry and Windows Mobile will be difficult.”

Which is obviously good news for consumers. “Do we need hundreds of choices of toilet paper? Probably not, but the competition keeps prices down and vendors innovating. Platform fragmentation is a pain if you’re a mobile app developer, so Canonical will have to earn developer support by attracting end users,” explains technology consultant Howard Kiewe. But that also translates to a significant uphill battle for Ubuntu, given this increasingly crowded space. “Canonical’s faces a David and Goliath x 2 challenge in competing against both Apple and Google, each of whom tower over Canonical when comes to financial, brand, and engineering resources. Odds of success are small, but the rewards are great. And let’s not forget that David won,” says Kiewe.

In order to establish itself, Ubuntu has to do a couple of things. One, it has to convince the general population of consumers that you don’t have to be a computer scientist to use it. Which, after some basic use, feels fairly obvious: The setup is more Mac OS than Windows, and while contributing to the open source project is encouraged, it isn’t necessary.

Secondly, all of those computer science-types (who are likely Android users) will need the potential advantages sold to them. The largest obstacle Android has faced is uniformity across multiple devices: Google has spread is operating system platforms thinly, and it’s created some confusion. The Chrome OS lives on the netbook and Android was segmented between tablets and phones. Ubuntu won’t take this route, instead existing identically on PC, phone, and tablet.

Another benefit might be Ubuntu’s cloud architecture: There are two cloud offerings from Ubuntu which could translate into promising features for mobile. Dwipal Desai, co-founder of website TheIcebreak and former head of YouTube mobile explains that Ubuntu has a server hosting service (like Amazon or Rackspace) as well as something called Ubuntu One. “Ubuntu One is something like a hybrid of Dropbox, iTunes and Sync,” says Desai. “Their goal is to let you synchronize all your content on their servers, and you can access it anywhere.”

Still, Desai says the jury is still out–way out–on how Ubuntu mobile will compete. “With Ubuntu One, they are definitely trying to get more into the consumer side of things, and if they succeed at that, we might be seeing more apps and services from Ubuntu that will run on mobile. However, replacing the current mobile operating systems with Ubuntu doesn’t seem plausible–or even necessary–at this point.”

Helmke is a little more positive about the prospects. “Development on a mobile version of Ubuntu will benefit other, older devices like desktop and laptop computers. A person could use all the same software in each place, share settings and configurations, and standardize their digital lives instead of switching software contexts each time they switch devices,” he says. “This may be the greatest benefit to the non-technical end user [as well], who just wants to learn how to complete specific tasks and does not particularly enjoy being forced to adapt to perform these tasks differently when using a different physical device.”