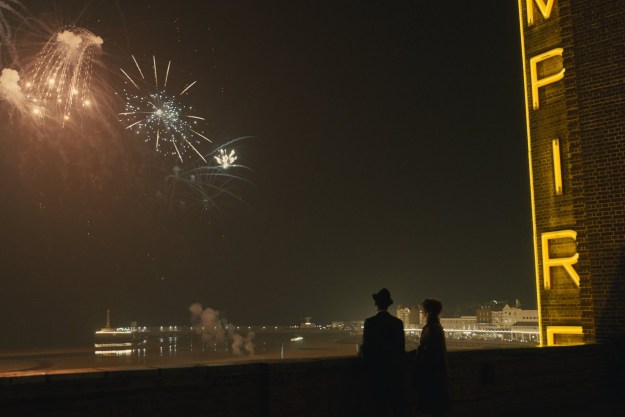 “Empire of Light is a visually stunning, tonally inconsistent drama that never quite figures out what it wants to be.”

In the lead-up to its release, Empire of Light has been marketed as a love letter to the movies that literally takes place in a slowly decaying English cinema. However, those who go into the film expecting a celebration of the movies will likely leave it scratching their heads or, worst of all, yawning.

Like every movie that director Sam Mendes has made with cinematographer Roger Deakins, the film is comprised of some of the most carefully composed, artistically lit images that you’ll likely see on-screen this year or any other. Over the course of his career, Deakins has so finely honed his craft that he’s begun to make producing incredible, awe-inspiring images look easy. Unlike so many of the movies that are produced nowadays, there’s not a single frame in Empire of Light that could be visually criticized or called into question.

The same cannot be said for the script, which Mendes wrote alone. The film packs a lot of ideas into its 113-minute runtime, none of which cohesively gel tor land with much of a considerable impact. Even its movie theater setting, which has been the key focus of the film’s marketing campaign, feels like an afterthought that’s never truly explored as thoroughly as it could be. If that makes it sound like Empire of Light isn’t really a celebration of the movies, that’s because it isn’t. The problem is that it isn’t really anything else, either.

The film begins simply enough, with Hilary Small (Olivia Colman) preparing the seaside movie theater where she works for another day of business. Across its opening minutes, Empire of Light gradually reveals more about Colman’s theater manager, including the numb sense of unhappiness she feels on a daily basis, the pills she’s been ordered to take every day, and the sexual relationship she has with her boss, Mr. Ellis (Colin Firth), who pressures Hilary to acquiesce to his sexual advances whenever they’re alone in his office together. Hilary’s life is, in other words, far from a happy one when Empire of Light begins.

Her days grow considerably more interesting, however, after she finds herself navigating an unexpected relationship with the movie theater’s latest employee, Stephen (Micheal Ward). Her relationship with Stephen brings a new sense of passion into Hilary’s life, but her belief that all she needed was a little romance to fix her problems puts Colman’s desperate character on an inevitably tragic path. The journey she and Stephen eventually go on together is full of heartbreaking turns and surprising revelations, but it ultimately has little to do with the theater where they work.

That fact makes Empire of Light’s numerous asides to the filmmaking process — most of which are voiced by a projectionist named Norman (Toby Jones) — feel shoehorned into a story that has little use for them. While the film’s inability to effectively integrate its many thoughts about cinema into its story is far from its only problem, it nonetheless ends up shining a greater spotlight on just how disconnected and incoherent Empire of Light feels. Even when the film is exploring ideas and moments that are genuinely compelling, it’s impossible to escape the feeling that Empire of Light is three different movies that have been incongruently smashed together.

It doesn’t help that the central relationship between Stephen and Hilary that grows throughout Empire of Light is one that not only feels shockingly clichéd, but also shallow and thinly drawn. Among the film’s many sins are the moments in which Stephen, a young Black man who is forced to deal with constant discrimination, has to literally teach Hilary about the prevalence of racism in 1980s British society. Like so many films, Empire of Light also fails to grapple with the racism that its central person of color faces without feeling the need to extraneously bring physical harm upon him.

Empire of Light’s struggle to actually deal deeply with the problems facing both Hilary and Stephen is particularly frustrating given the moving, committed performances that both Colman and Ward deliver. Colman, for her part, brings the same ferocity and quiet heartbreak to her performance here as she has in several past films — namely, The Favourite and The Lost Daughter. Ward, meanwhile, gives one of the more notable breakout performances of the year as Stephen, a young man whose curiosity and kindness make him the most interesting and alive figure introduced in Empire of Light.

Colman and Ward’s performances, as well as Deakins’ reliably alluring cinematography, bring a lot to Empire of Light. However, their contributions aren’t enough to distract from the film’s unbearably languid pace and frequently frustrating screenplay. Coming off the excellent war movie 1917, which ranks firmly as one of his most straightforward films to date, Mendes has returned with a period drama that fails to say much of real worth about any of the topics it introduces, including the power films have to change and enrich someone’s life. It’s a cinematic love letter that can’t ever seem to find the right words.

Empire of Light is now playing in theaters.

Vesper review: an imaginative sci-fi adventure
Smile review: A cruelly scary studio horror movie
God’s Creatures review: an overly restrained Irish drama
Blonde review: a striking and tough Marilyn Monroe biopic
How to legally bet on the 2023 Super Bowl online
Apple’s MLS Season Pass is about more than just streaming games
Everything leaving Netflix in February 2023
Where to watch Skinamarink
6 movies coming in February you need to watch
5 actors who should be Batman in The Brave and the Bold
The Boogeyman trailer: don’t look under the bed
The best movies on Disney+ right now (February 2023)
The 10 most popular TV shows on Netflix right now