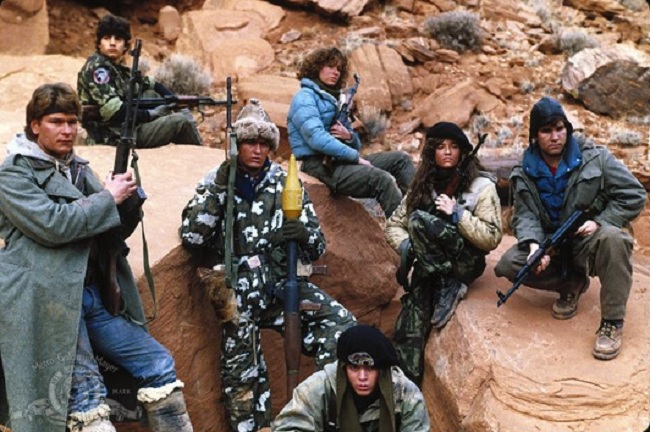 The remake of the 1984 film Red Dawn might actually be cursed. Either that or the whole things was a mess from the start. The film was originally given the greenlight back in 2008, and first time director Dan Bradley was hired, but it took over a year for the project to actually begin filming. Principle photography finally began in Fall of 2009, and the film finished filming by late Spring of 2010, but then MGM happened. Although originally scheduled for a November 2010 release, in June of 2010, Red Dawn—along with all MGM financed films—was delayed due to the studio’s financial woes. Without the power of a franchise name on it like the upcoming Hobbit or the next James Bond film, it wasn’t looking good for the remake.

But then a semi-miracle happened, and MGM managed to successfully file for Chapter 11 which allowed them to restructure and begin making movies again. The Hobbit was the first to receive a greenlight, followed shortly by James Bond, and Red Dawn–which was already in post-production–began to seek a partner to distribute the film. That has turned out to be easier said than done.

The original story of Red Dawn starred Patrick Swayze, Lea Thompson and a pre-bi-winning Charlie Sheen, and focused on a handful of teens who fought a guerilla battle against an invading Soviet Union. In 1984 you would be hard pressed to find a movie with an enemy military that wasn’t at least Soviet affiliated, so it was an easy fit. But while the idea of an invading army occupying American soil may still make for an exceptional action film, the question of who the bad guy would be has become more of an issue.

The obvious solution for the filmmakers was to cast the Chinese as the aggressors. Sure, the idea of China invading America may be farfetched—especially since they already own a good chunk of it thanks to the percentage of our debt they own—but it is hard to overlook the military power that China could muster, plus the “red” in Red Dawn was meant to signify communism, so who else?

Distributors, however, were less keen to alienate the burgeoning Chinese box office, which now ranks fifth in the world. Besides being financially intertwined with America on several level, and many studios also having business dealings in China beyond the movie industry that they aren’t keen to alienate, the Chinese cinema is importing more and more American films. The last Bond film, Quantum of Solace, made MGM around $21 million dollars, which may not sound like a significant portion of the $586 million the film made worldwide, but that money came from a market that did not exist for Casino Royale, and so it was basically gravy for the studio.

But with Red Dawn, that film would never pass the Chinese censors, and a potentially major source of revenue was suddenly cut off even before the film came out. So according to the LA Times, MGM decided to do a little digital touching up, and completely alter the film to remove the Chinese. In their place, the Chinese flags, symbols and dialog will be replaced by the specter of North Korea.

The studio claims that the process will only cost around a million dollars, a minor fee compared to the $75 million budget. As for the cast, the film took the odd decision to cast mostly Korean actors to play Chinese soldiers. The villain in the film, Major Lo, was actually played by Korean-American actor Will Yun Lee (Bionic Woman, Elektra). Apparently the filmmakers hoped that Americans wouldn’t notice the difference.

While that may seem slightly racist, it is just one problem of many facing the film. Even with the promised changes, and even with the film starring Chris Hemsworth and Adrianne Palicki—both of whom are set to receive a massive amount of attention for their roles as Thor and Wonder Woman, plus the inclusion of several up and coming stars including Josh Hutcherson, Josh Peck and Isabel Lucas, the film may never receive distribution. If that happens, a DVD release is a possibility, as is the entire film being scrapped.

Red Dawn is not the first property to replace the Chinese for the North Koreans. The recently released video game Homefront also features the North Koreans as a force that invades America. Originally the plan was to feature Chinese invaders, but the developers claimed that most people were simply not afraid of the Chinese. Ironically, that game is written by John Millius, the writer of the original Red Dawn.