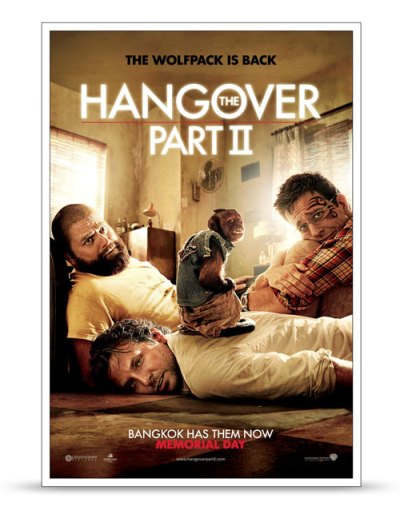 Let’s go ahead and get this out of the way right now: Yes, the plot of The Hangover Part II is almost exactly the same as the first. It is nearly a carbon copy at parts, although the details are different. You have a group of guys who wake up with no memory of what happened, and they try to piece a wild night back together to prevent a minor personal catastrophe. If you thought the trailers made the plot look like a clone of the original, you are correct, and you win a cookie. Although not from us. Cookies aren’t cheap.

But there is a reason that the first movie did so well, and it wasn’t just the original and wild plot. It was a success because the humor was good, the jokes were fresh and the characters were funny and well acted. The situations were so outrageous that you couldn’t help but laugh at the insanity of them, and The Hangover Part II knows this and builds off of it.

The Hangover Part II is not an original film, and therefore it is not better than the first. But it knows what it is doing and even plays against the expectations to deliver some solid jokes and laugh out loud moments. You’ll have a strong idea of everything that will happen in terms of the overall story within the first few minutes, but then again, the same can be said for 90-percent of all the movies coming out of Hollywood, so who’s counting? A funny situation can trump a predictable path, and The Hangover Part II has funny situations in spades.

The Wolfpack heads to Thailand

Let’s make this easy—if you have seen the first movie, you know the basic plot of the second. The details are different—only slightly different—but the idea is the same.

When Stu (Ed Helms) plans to head to Thailand for a quiet wedding with his fiancé Lauren (Jamie Chung), he wants his best friends, Phil (Bradley Cooper) and Doug (Justin Bartha), there with him. Through a bit of a guilt trip, Alan (Zach Galifianakis) also scores an invite, but much to his chagrin, Lauren’s 16-year old gifted, Stanford-bound brother, Teddy( Mason Lee), joins them as they head to SE Asia.

Stu just wants a simple evening at the beach resort before the wedding, but following a quiet drink with friends, things go badly. Stu, Phil and Alan wake up in a seedy motel room in Bangkok with no idea how they got there, and more importantly they have no idea where Teddy went.

The rest of the movie plays itself out in a similar fashion to the original, and giving details would only spoil the jokes. Needless to say, they discover that they had a hedonistic evening, filled with prostitutes, drug deals and a monkey.

Bangkok replaces Las Vegas this time around, and it adds an interesting setting for the film. It isn’t ever overdone, but the city does feel a bit like a character in itself. Thankfully though, the movie avoids the common pitfalls associated with the typical “Americans in a foreign land” plot that you have seen many times.

From the very first scene of the film, when Phil is once again on the phone having to explain that they messed up, you’ll know what to expect. A more philosphic person might comment that it isn’t the destination that is important, but the journey.  That is a worthy description of the film. Although since the journey includes lady-boys, severed fingers and a naked Mr. Chow (Ken Jeong), it may be over thinking it a bit.  By sticking with the same plot, they actually manage to build off it and delve into jokes that no one has touched on before—except for the filmmakers in the original. There was still plenty of mileage left in the blackout gag, and Part II finds a lot of ways to build off what went before and create new humor from it. It is almost meta-fiction that makes fun of itself by playing off established jokes.

The downside is that you know what to expect and you won’t ever really feel surprised–shocked maybe, but not really surprised. You know the entire course of the movie from the first scene, and if this were another type of movie, that might be a fatal flaw. But it’s a comedy and in general the jokes are more important than the plot—just look at every romantic comedy ever made if you need proof of that. Still, part of what made the original stand out was the plot that kept you guessing. That is absent here which is too bad.

While the plot won’t surprise you even a little, the jokes will. The idea of trying to piece together the previous evening is just what holds the film together—it is the jokes that will make it a success or failure, and that rests on the shoulders of the actors that deliver them. The last film was a major success for director Todd Phillips, but more so for the three stars: Ed Helms, Bradley Cooper and Zach Galifianakis. Even Ken Jeong received a major bump thanks to the exposure in the movie.

All three principle actors turn in solid performances, and they all seem to be more comfortable in their roles. In the original film, Cooper was the primary focus–Galifianakis had the breakout role and Helms opened a lot of doors for himself in Hollywood–but Cooper was the best known of the group and ended up with the most screen time and some of the funniest one-liners. This time around the film is more balanced, and if anything, Helms is the primary focus.  Fans of Cooper might actually see his role as having been diminished compared to the last film, but it is simpler than that—he no longer is being required to carry the film, which makes the three characters feel like more of a unit than Cooper’s Phil and his buddies. Cooper actually comes off slightly worse for it, but that is only in comparison to the original film.

The jokes are at times laugh out loud. You may not hear as many one-liners quoted from Part 2 as you do the original (although there may be a few–the line “Bangkok has him” stands out), but there are still some genuinely funny moments. The biggest problem with The Hangover Part II is that it is competing directly with itself. The story is so close to the original that there really isn’t anything else to compare it to–and not just for critics, but for the audience. In a comparrison with the original it falls short, but compared to many other R-rated comedies, it is well above them.

The Hangover Part II may not be as good as the original, but that is a harsh comparison to make. Judged on its own, Part II is still a very funny movie starring some quality actors. The biggest problem is the expectations the film will have. The story is almost a rewrite of Part 1, which may turn some people off, but you have to remember that the original had a fairly unique plot. Look at the majority of comedies being thrust at audiences these days and see how much originality can be squeezed from them. Not a lot. The movie does the same thing it did last time, but it does it well.

Todd Phillips and crew had the nearly impossible task of topping a film that became something of a phenomena. Even those that hated the original had to see that it was just “one of those movies” that was in the proverbial right place at the right time.

The Hangover Part II may be the funniest movie so far this year, although that may be saying more about the lack of competition than the movie itself. The sequel doesn’t come near the original’s lofty success, but it does a good job in the attempt.

(The Hangover Part II is rated R, with a running time of 102 minutes)

Hangover 2 trailer: In this first full length trailer, what happens in Bangkok stays in Bangkok
The Hangover 2 trailer debuts
Cedar Rapids Review
Harry Potter and the Deathly Hallows Part 1 Review
Everything revealed at Netflix’s Tudum 2022 event
Can a Community movie still be relevant and funny in 2022?
10 most powerful Marvel Cinematic Universe characters, ranked
The best political podcasts to listen to in 2022
The best alien movies of all time
Section 8’s Christian Sesma on how ’80s movies influenced his filmmaking
The best superhero movies of all time
The best superhero TV shows of all time
What’s new on Peacock in October 2022