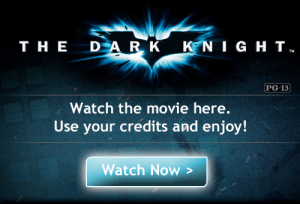 Netflix, beware: Warner Bros. studio will begin renting movies directly through Facebook, starting with The Dark Knight, according to The Hollywood Reporter.

To rent the movie, Facebook users need only visit the official Dark Knight Facebook page, where they can access the rental icon. Rentals will cost 30 Facebook credits, which equals $3. Renters will have 48 hours from the time of purchase to watch the movie before the rental expires.

“Facebook has become a daily destination for hundreds of millions of people,” Thomas Gwewcke, president of Warner Bros. Digital Distribution told the Reporter in an interview. “Making our films available through Facebook is a natural extension of our digital distribution efforts. It gives consumers a simple, convenient way to access and enjoy our films through the world’s largest social network.”

The rental feature is currently only available to the 30 percent of Facebook users who live in the US.

While Warner Bros boasts that this move would make them the first major studio to offer film rentals through the popular social network, it’s not the first movie rental available through Facebook. Both the short film “Gone Fishing” and the full-length feature Cowboys in Paradise have been available for rental through their fan pages for some time. (Both of these are smaller, independent films. So technically, Warner Bros. claim is correct.)

Warner Bros. says that additional titles will be added over the next few months, if the program proves successful. This seems likely, as an increasing number of people are opting to watch movies online. In addition, Facebook users have become used to paying for virtual good through the site, thought until now, that’s been mainly in the context of games like FarmVille.

It will be interesting to see how this plays out — if Facebook becomes the go-to place for movie rentals, that will certainly change the movie streaming industry’s landscape.

Topics
Save money with the best free movie apps for iPhone and Android
Be kind, rewind: How VHS shaped the way we watch movies
The best places to watch free movies online
Netflix vs. Amazon Prime Video
How to watch 1883 online: where to stream Yellowstone prequel
M. Night Shyamalan explains how he tells stories in Knock at the Cabin featurette
2023 Oscars: where to watch all the Best Picture nominees
The most likable characters on That ’90s Show, ranked
The 10 most popular TV shows on Netflix right now
Where to watch Jurassic World Dominion
The 10 most popular movies on Netflix right now
5 upcoming horror movies you have to see in 2023
The best MCU fights, ranked