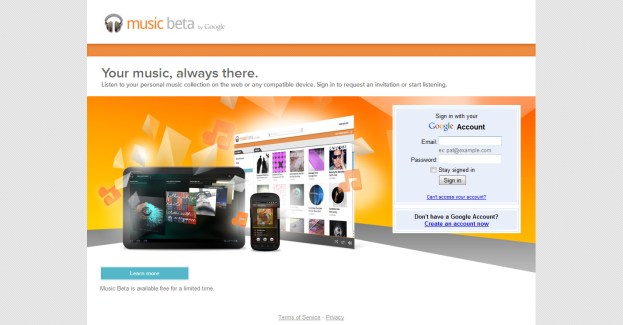 The idea of a music locker — that is, a cloud service that houses all that juicy, illegally downloaded music you amassed during college — is nothing new. Apple’s iTunes Match service and Amazon’s Cloud Drive both debuted last year to considerable fanfare as they allow users, for $25 a year, to upload their music and listen to it anywhere. Google is now offering a similar service in the States with Google Music … the only difference being that this locker is free. And it’s the best move Google could make when it comes to your music.

Google Music’s new “scan and match” feature went live in Europe last month and hits the U.S. today. Much like iTunes Match, the service scans your music library and matches the tracks to songs in the Google Play store, ready to be played from any computer or your Android device. While Google won’t let you download higher-quality versions of your songs on different devices a la iTunes Match, you can still stream those tracks at higher bitrates, putting the service at feature parity with the competition.

But it’s not the features that count. It’s the price, considering that asking for $25 a year to listen to your ill-gotten copy of “The Fame Monster” is not asking the world. Especially when that money would go to the content creators you were pirating from. But when beloved services like Pandora and Spotify already supplement many users’ music libraries today, paying more for what you already own might sound unattractive.

Google is essentially doing with Google Music what they’ve done with Google Docs; giving their service away. In this way, music lovers might see a welcome way of storing all their favorite music, stream the rest in peace, and feel tempted to purchase more from the Google Play store, pulling customers away from Apple and Amazon in the process.

Whether this service can bring about the kind of shift Google wants remains to be seen. But it’s certainly a move worth paying attention to, especially for a product that’s remained rather lifeless since its splashy launch.