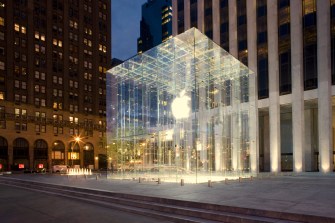 According to new data released by retail analysis firm RetailSales, when it comes to retail sales per square foot, there’s only one contender. And it’s based in Cupertino.

As reported by 9to5Mac, the study looked at more than 160 US-based chains and found Apple ahead of the likes of Costco Wholesale and Signet Jewelers. It’s even doing twice as well as its nearest rival, Tffany & Co.

With 5,626 sale per square foot, Apple left its nearest tech-related rival, GameStop, in the dust. In fifth place, the video game retailer managed just 1,009 sales per square foot. All the stores in the top 10 improved their sales-per-square-foot figures over the previous year, except for Best Buy, which saw a 4 percent decline. Apple showed the biggest increase in the whole of the top 20, with a huge 49.1 percent jump in sales.

The figures will be hugely pleasing for Apple as it has only been in the retail business a mere ten years.

The computer giant has just over 230 stores in the US, and more than 300 globally. It appears to be on something of a shopping spree of its own just now, buying up retail space all over the world as it continues to expand its retail empire. This weekend sees the opening of three new stores, in France, North Carolina and Arkansas.

During the second calendar quarter of 2011, Apple’s stores generated $3.5 billion in revenue and $828 million in profit, with more than 73 million visits made by consumers during that period.

Last month the company stopped selling a number of boxed software products in its retail stores, making them available online only. The space they’ve left has been filled by more profitable items such as iPads and computers, a move that will no doubt ensure it stays at the top (or thereabouts) of the sales-per-square-foot table for some time to come.

Best 4th of July sales still available — save on TVs, Apple and more
Amazon eying October for another Prime shopping event, reports say
It’s official: Prime Day 2022 is happening in July
Amazon to shut 68 retail sites, including its bookstores
Here’s why you need to update your Google Chrome right now
Malware has a terrible new way to get to your computer
Jeep is launching its first two electric SUVs in the U.S. in 2024
3 upcoming gaming monitors worth getting excited about
2024 Chevrolet Equinox EV aims for affordability with $30,000 base price
Leak confirms Intel Raptor Lake may bring huge core increase
More than 80% of websites you visit are stealing your data
Nvidia has an exciting announcement about the RTX 4000 GPUs
Intel reveals official Arc Alchemist specs, and there’s one major surprise