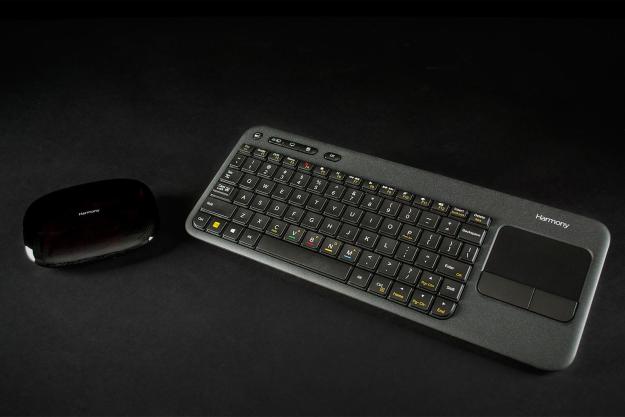 “The Smart Keyboard is a niche product, but it serves its niche well.”

Most of Logitech’s well-respected Harmony remotes come in the familiar wand-style form, but this product is a bit of a departure from that trend. In fact, this remote looks like it belongs on your computer desk, not your coffee table. That’s because the Harmony Smart Keyboard is Logitech’s answer to the blurring line between how we interact with our computers vs. how we interact with our home theaters.

Anyone who has used a smart TV, Roku, Apple TV or similar device knows the pain of entering usernames, email addresses, passwords, URLs, and search keywords – never mind those that actually use a home theater PC. By coupling a keyboard with a trackpad and dedicated function buttons, along with the efficient Harmony Hub infrared blaster, Logitech’s Harmony Smart Keyboard aims to make interacting with next-generation home theater gear more fun, engaging and effective.

Inside the Harmony Smart Keyboard’s tidy box is a computer-style keyboard with a trackpad armed with two mouse-style buttons off to the right. Along with the keyboard you get the slim and sleek Harmony Hub, two tiny, individually numbered USB receivers, a power adapter, two AA batteries, a mini IR blaster, and a USB extender for use with the little USB receivers when device ports are hard to get at.

The Harmony Hub is the same model seen in other Harmony products, such as the Smart Control and Ultimate –sleek and unobtrusive. In contrast to the glossy veneer of the Hub, the keyboard is layered with a slightly rougher matte rubber for a more muted, yet tasteful design that makes it more functional than pretty.

Logitech really went to town on the keyboard’s layout.

Logitech really went to town on the keyboard’s layout, utilizing as many of the keys as possible to serve dual functions. The Function row along the top can handle things like the guide, DVR, menus, media playback and volume. The V, B, N and M keys can double as either Xbox or Sony PlayStation buttons. There’s a dedicated Windows Start button next to the Alt key. And finally, the row at the top are one-touch activity buttons, like an additional left mouse click, one-touch access to a TV-connected computer, plus Watch TV and Watch a Movie. An Off button will turn off all devices being used in a current activity.

Two AA batteries power the keyboard, and next to their slots is another that fits one of the USB receivers for safekeeping. The two USB receivers are very small dongles that could be easy to lose, so it’s nice to see Logitech including a compartment to store at least one of them in the keyboard itself. The USB Extender is meant for use in hard-to-reach areas, but it does carry an added advantage of being easy to spot, so we didn’t use it exclusively for its intended functional purpose.

Logitech includes a mini IR blaster to extend the coverage of the Hub in case it’s IR output can’t reach a particular piece of equipment, or if a component has been intentionally hidden. The blaster plugs directly into one of two 3.5mm jack in the back of the hub. Only one blaster cable is included – additional cables cost $10.

Unlike previous Harmony remotes that have to be connected to a computer for setup, the Smart Keyboard needs only the free Harmony app on iOS or Android. In fact, this app is the only means of setup. That might come off as a drawback, but it makes sense in the context of the hardware and software combination at work here. The Harmony app plays almost as big a role as the keyboard because there is no physical remote in the equation. In this rig, your smartphone or tablet is the remote.

We quickly forgot about this distinction when going through the app’s excellent step-by-step instructions, which included presets for specific types of devices, like a TV, receiver, Blu-ray player, game console, and slots for others, too. It could also configure devices that didn’t have defined presets, like streaming boxes and sticks, with a little added info from us that smoothed the way forward. This process effectively bridged two input methods for controlling the devices, where the keyboard or mobile app could be used separately or in tandem.

We noted that Bluetooth also plays a crucial role here because it’s sometimes required and it offers a degree of expansion. For example, the Apple TV needs Bluetooth to connect, while the PlayStation needs a USB receiver for text entry and navigation, but Bluetooth for powering the console on or off. As for expansion, the Smart Keyboard is limited to supporting the two USB receivers that come with it, so it’s not possible to buy more for expansion. However, we found that we could control a third device via Bluetooth, which we’ll get to a bit further down.

As we continued with our setup, we noted that we could set up activity buttons to perform two functions each, one triggered by a quick press and the other by a long press. This turned out to be a handy feature.

It didn’t take long for us to appreciate the speed with which we could type in URLs, logins, passwords and search queries on the devices the Smart Keyboard was connected to. This was especially useful when connecting a laptop or desktop to our TV, either wired or wirelessly. Both PCs and Macs work perfectly fine, with the trackpad on the keyboard in full control of navigation. The USB receivers are perfect for this, primarily because they pair with the keyboard automatically. In cases where we had the receivers plugged into both a computer and another device, changing inputs was as easy as using the activity buttons to toggle between them.

It didn’t take long for us to appreciate the speed with which we could type in URLs, logins, and passwords.

We tried the Smart Keyboard with a number of devices to gauge consistency. The Apple TV was a unique case in that the Smart Keyboard could only interface with the Apple TV 3, updated to the latest version of its operating system. It also required Bluetooth because the USB receiver wouldn’t work, despite the presence of a USB port in the back of the Apple TV box. The two worked well together, and we didn’t mind using the Harmony app on an iPhone as an alternative to the Apple TV remote. It’s just a shame that the Apple TV 2 we still use was rendered useless in this scenario.

The Roku 3 and Roku Streaming Stick are unique in that neither one needs the USB receivers or Bluetooth to work. Instead, they just work via Wi-Fi, though because the Streaming Stick has no IR receiver built-in, the Smart Keyboard is actually the only Logitech Harmony product that can work with it. We were able to enter text, search for content and navigate menus without ever reaching for the Roku remote. We found it to be a serviceable experience on both the streaming stick and the Roku 3 box, but preferred to use the keyboard with the Roku 3, which is known to be a zippier, more responsive device overall.

Google’s Chromecast has no IR receiver, and isn’t really designed to work with peripherals like the Smart Keyboard because a smartphone, tablet or computer can do the job. However, we sorted out a workaround wherein we mirrored a browser from a MacBook Air (with a USB receiver plugged in) in another room to the TV, controlling text input and navigation with Logitech’s keyboard from the couch. And because many computers can be controlled via Bluetooth, it is technically possible to reserve the USB receivers for use on two other devices.

That kind of flexibility is perfect for any computer setup, especially those using home theater PCs. We found this to be the case with the PlayStation 3 and PlayStation 4 as well, where the USB and Bluetooth connectivity combo let us type and navigate their respective interfaces with few problems.

The Xbox One is a bit of a different story, however. The keyboard will work, but the trackpad won’t. That means that you’d have to use the gamepad or Kinect gestures to actually navigate or click on anything. We could type away just fine, but had no way to really do anything else without utilizing Microsoft’s own input methods to finish the job.

The Smart Keyboard isn’t designed to work with all cable boxes, and since we can’t test them all, it’s hard for us to determine which will and won’t work. Ditto for Blu-ray players, AV receivers and other set top boxes in Logitech’s catalog of 225,000 supported devices. The Harmony app usually comes in handy in those cases, primarily because it isn’t limited by hardware design. It can manage far more than the six activity buttons the keyboard has, and is the tool we used to map buttons to the keyboard (when we actually needed to). We could rearrange control tiles to our liking for whichever device we were setting up to control. None of this is new, though, since the app works exactly the same on the Harmony Smart and Harmony Ultimate.

One bonus we noted is that the app and keyboard can control Philips Hue lights, so long as the Hub is connected to the same home network. This let us choose the ambient lighting we wanted for anything from watching a movie to listening to music.

The biggest hassle involved with using any universal remote is setting it up, and the Harmony Smart Keyboard takes a lot of that frustration out of the equation. The keyboard solves a vexing problem for anyone looking to type something into a device or interface without having to resort to navigating an onscreen keyboard. The inclusion of the remote app simplifies things and acts as another input option if you have no need for the keyboard at any given time.

That being said, we couldn’t help but find the keyboard to be a bit of an eyesore on aour living room coffee table. It’s not that it’s ugly, just that it’s considerably bigger than other remotes and isn’t quite as portable. There was nothing stopping us from taking this from room-to-room, mind you, but we found it was much better to park it wherever the home theater was and leave it there as much as possible.

The lack of trackpad support on the Xbox One is disappointing, and we suspect there may be other devices it won’t work so well with, too. On the flip side, though, it works really well with compatible devices, and it’s hard to find a universal remote product that handles text and navigation so seamlessly — especially for PCs and Macs that are part of a home theater setup.

That contrast makes the Smart Keyboard more of a niche product than any of Logitech’s other universal remotes, but it serves its niche well. If you don’t find yourself needing to type when using your home theater devices, this isn’t the right Harmony product for you. But if you find yourself frequently cursing at your TV as you hunt and peck at the letters, numbers and random characters in your 26-character password, the Harmony Smart Keyboard is the best way to avoid a headache (or aneurism).

Intel may have just leaked its Arc Alchemist GPU lineup