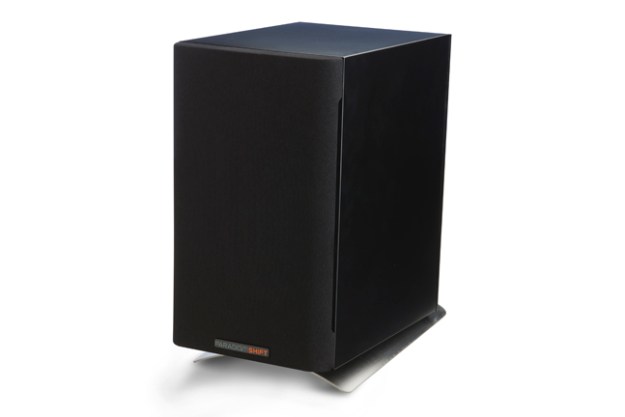 “Paradigm’s A2 speakers are a total knockout and, at about $500 a pair, a tremendous value, too.”

When we visited Paradigm’s booth at the CEDIA 2011 Expo, we were surprised to see a small crowd had gathered around a singular, small table. Here was Paradigm with just about every speaker and subwoofer it makes on display along with some of Anthem’s impressive electronics, including the super-slim 2,000 watt M1 amplifier. Yet, the crowd was fixated upon whatever was happening on this little table.

The object of everyone’s interest, it turned out, was a prototype pair of the Paradigm A2 powered speakers. Marketed under a new product family called Paradigm Shift (it was bound to happen) the A2’s are self-powered versions of the company’s well-received Atom’s.

The A2 is aimed at DJ’s, musicians, project studio engineers and pretty much anyone else looking for a self-contained sound solution. In our Paradigm A2 powered speaker review we look at what sets these apart from other powered speakers, dig into their sonic performance and find out if Paradigm’s leap into the powered speaker market was a smart move.

Having recently reviewed the rather hefty Pioneer S-DJ05 active speakers, we sort of expected the A2 speakers to be a little heavier than they turned out to be. The S-DJ05’s weighs in at a little over 15 pounds each while the A2’s tip the scales at about 11.5 pounds. At 11 x 6-5/8 x 8-7/8 inches (H x W x D) the A2’s are a bit more compact as well. The lighter weight shouldn’t be misconstrued as an indication of lesser build quality, however. The A2’s appear to be very well crafted and the dull thunk that we got from rapping on the cabinetry confirmed that the speakers, at least as far as the cabinets are concerned, are built to last.

As we pulled the speakers from their boxes we found…well, not a lot actually. That’s the beauty of active speakers. All you really need is a power cord and some connecting cables. Paradigm throws both a rather average looking (read: not thick) 6-foot-long power cable and heavily shielded ⅛-inch mini patch cable in with each speaker.

The Paradigm A2’s are available in 5 finishes including white gloss, red gloss, gray gloss, black satin and ash black grain. Our review pair came with the ash black grain finish which was well executed. There weren’t any visible seams and the veneer had some real texture to it. The speakers do come with magnetic grills-and the grills are attractive enough-but we took them right off. These speakers are way sexier with grills removed.

The Paradigm A2’s feature a 5.5-inch aluminum dome mid-bass driver and 1-inch aluminum dome tweeter (protected by a fixed metal grill) in a sealed cabinet. The speakers are bi-amplified so each driver gets 50 watts RMS/80 watts peak. That’s a combined power output of 200 watts RMS. The rated frequency response is 55HZ-20 kHz with a -2 dB down point at 55Hz. The specs indicate that the lowest frequency the speakers hit is down around 30Hz. Paradigm has employed a DSP to tune the speaker’s response.

A volume dial on the back of each speaker allows individual gain control which can be looked on as both a convenience and a liability. If one speaker must be further than another, then volume adjustments can be made to help balance out the difference in distance. However, if both speakers are placed equidistant from the listener, care must be taken to set them at exactly the same level. This would be a lot easier if the volume dial was accented with level markings or numbers. As it is, getting the speakers perfectly balanced is an educated guess unless you get a decibel meter involved.

Whereas Pioneer’s S-DJ05’s speakers were equipped to satisfy the professional audio market with their ¼-inch and XLR input jacks, the Paradigm A2’s seem better suited for portable media players, desktop computers and digital DJ decks. Of course, with both RCA and ⅛-inch input jacks, just about any connection is possible with the proper adapters. Grab Paradigm’s Bluetooth dongle or an Apple Airport Express and the speakers become wireless. There’s even an AC jack on the back of each speaker.

While the Paradigm A2’s are most likely to be set up in a stereo pair, they are not limited to that scenario. Paradigm has very cleverly designed these speakers so that they can be strung together in any number of configurations. A selector switch on the back of each speaker allows it to be designated as a left, right or center speaker. Conceivably, with a single input, you could string together nine of these speakers with three left channels, three “center channels” running in mono and three right channels. Just thinking about the possibilities gets us a little geeked out.

Before we start raving about how fantastic the Paradigm A2’s sound (and there will be much raving) we need to talk about a couple of the quirks users might encounter when using these speakers. First, these are active speakers and, as such, there will be some slightly audible air noise. This is normal. We’ve yet to encounter an active monitor that doesn’t put out some air hiss and that’s because it is byproduct of active speaker design – there’s just nothing in the signal path between the amplifier and the drivers.

Truth be told, the speakers will very rarely need to be turned up past the ⅓ point on the volume dial. With our pre-amps at full output, the speakers were ear-blisteringly loud. The only time we found ourselves adjusting the speakers’ gain beyond the ⅓ point was when we used our iPhone as a direct source and that’s just because the iPhone’s output is so weak. Bottom line: If turned up too loud, the A2 will let you know how noisy your electronics are, especially old midrange soundcards in desktop computers.

We gave the A2 speakers ample break-in time (about 40 hours), but they didn’t need it much. These speakers sounded great straight out of the box. The first thing that struck us was how detailed and controlled the high frequencies were. Often, with great detail comes great brightness, but Paradigm struck a balance with the tweeter that results in dazzling, detailed treble and superb dispersion without getting too excited.

Moving down the frequency spectrum we come to that point where low treble meets high midrange and eventually trickles down into the meat of the midrange region. This is an area in which the A2’s really shines. We spent a lot of time listening to various cuts by trumpeter Til Bronner, a player whose work spans from old school, classic jazz to jazz influenced R&B and whose sound is distinct, breathy and poignant. On Love Theme from Chinatown from “Oceana” the A2 captured Bronner’s Chet Baker-inspired sound with such remarkable warmth and resolution, we almost felt as if we were listening to a pair of large, floor-standing speakers. The primary difference here was that the A2 produced effortless, pin-point center imaging whether placed within two or ten feet of our listening position.

Perhaps the A2’s most impressive attribute is their wide dynamic range. Rodrigo y Gabriella’s Hanuman from the group’s album “11:11” provides some dramatic dynamic shifts between delicate, flying guitar runs and brutal, pounding strumming. Even cranked up, the A2’s were able to pivot effortlessly and quickly between disparate volumes.

The A2’s bass response is simply outstanding. Let’s see how many adjectives we can throw out here, shall we? How about punchy, taught, balanced, assertive, nimble and musical? Yeah, that about covers it. Anyone doubting the bass capabilities of a 5.5-inch driver needs to hear the A2’s in action. While the A2’s response isn’t likely to upset the neighbors two doors down, it’s exactly what it ought to be; a perfect foundation for the music played over it.

The A2’s aren’t what we would call a “studio monitor”. Such a designation suggests a very flat frequency response which is not exactly what the A2’s produce. These speakers have a bit more sparkle at the highest frequencies than most studio monitors do. This gives the A2’s a sense of “verve” not typically found in a studio monitor. Instead, the A2’s would best be compared to other powered speakers like the AudioEngine A5.

While we still have much appreciation for the AudioEngine A5’s, Paradigm’s A2’s, put simply, sound better. In a head-to-head comparison, we noted that the Paradigm A2’s had much more accurate, controlled bass response and a lively, yet less fatiguing, top end.

Paradigm’s A2 speakers are a total knockout and, at about $500 a pair, a tremendous value, too. Their limited quirks are easily out-shined by their superior build quality, unique connectivity features and fantastic sound. These speakers exhibit a high level of musical refinement that is an absolute feast for the ear. Though marketed toward aspiring DJs and music producers, these speakers will likely find audience with audiophiles everywhere. If there’s a better sounding sound solution under $500 out there, we haven’t heard it yet.

Topics
Peacock does away with free tier for new subscribers
Klipsch follows the success of The Fives with The Sevens and Nines powered speakers
Marshall’s latest Bluetooth speaker has four drivers for 360 sound
The best waterproof Bluetooth speakers for 2023
Is there a Sling TV free trial? Here’s what you need to know
What’s new on Apple TV+ this month (February 2023)
YouTube TV loses MLB Network and MLB.TV add-on
YouTube TV: plans, pricing, channels, how to cancel, and more
Apple’s MLS Season Pass is about more than just streaming games
Best 75-inch TV deals: Get a large screen for the Super Bowl
Flash sale drops the price of this 55-inch QLED 4K TV to just $370
Netflix expands its spatial audio, number of devices that can download content
Sony’s 2023 AV receivers are Sonos-ready and work with wireless speakers