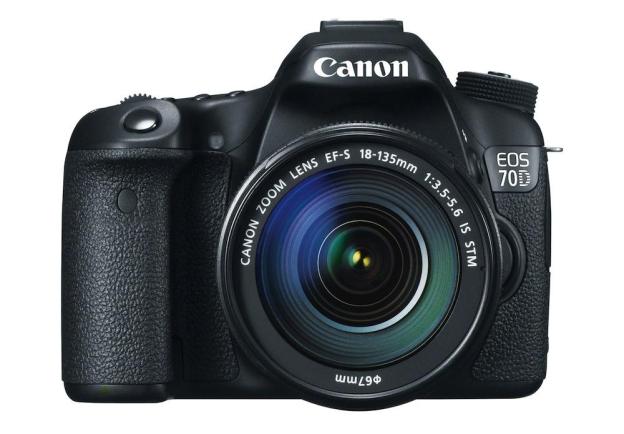 Check out our review of the Canon EOS 70D digital camera.

Canon’s announced some new DSLRs recently, but this latest model is branded as a cinematographer’s candy. The new EOS 70D offers a step up from entry-level digital SLRs for those who want even better autofocus, and want them in motion pictures as well.

Unlike the recently announced T5i’s “Hybrid CMOS AF System,” Canon’s upped the specs again for the 70D. This time, the company’s calling the system “Dual Pixel CMOS AF,” signifying dual diodes within each pixel that allows those pixels to capture two image spectrums at the same time. Using these two data, it is able to find a balance of the perfect focus in each pixel, and, well, multiply those pixels by whatever your resolution is and you’ve got a very complex autofocusing system that’s designed so you really can’t screw up a shot.

This feature is likely to be a hit with amateur photographers and budding cinematographers alike, allowing a more seamless way to capture moving objects without losing focus. The system boasts three configurations for focusing: Facial detection lock, tap-to-focus, and basic autofocus based on the Dual Pixel CMOS process.

Additionally, the EOS 70D now has a touchscreen 3-inch LCD panel that can flip open to expand angle possibilities. The creative filters found in recent Canon DSLR models are also there, and you can view them live in the viewfinder before taking the shot. If you’re not one to use Canon’s built-on filters, no worries. The 70D is also Wi-Fi enabled so you can share your photos instantly via email or other social networks and apply preferred filters there.

All the new Canon standard specs are there, including the upgraded 20.2 megapixel capacity, APS-C Canon CMOS sensor, and a DIGIC 5+ Image Processor. It’s also got an ISO range of 100 to 12800 (expandable to 25,600), and is compatible with up to 103 models of EF lens.

Watch the video below to see a promotional short movie shot with the 70D.

The best 360-degree camera apps for iOS and Android