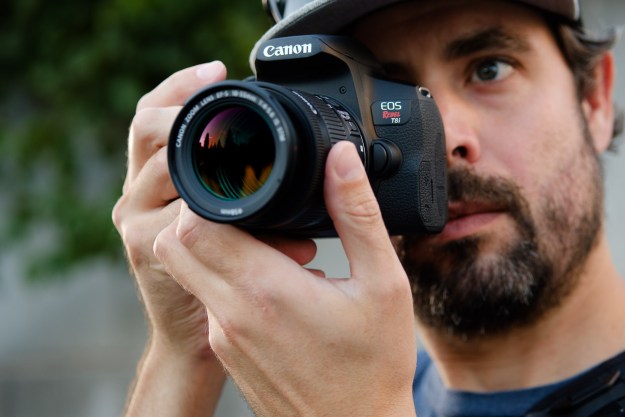 “Small changes push the T8i toward enthusiasts, but it remains a ho-hum DSLR in a mirrorless world.”

In 2017, I reviewed the Canon EOS Rebel T8i’s predecessor, the Rebel T7i, and said it was a refreshing exception to the rule that entry-level DSLRs are not exciting. An “EOS 80D in disguise,” I called it, referring to Canon’s upmarket DSLR that won a Digital Trend’s Editor’s Choice award the year before.

Sadly, the magic of the T7i has vanished from the T8i. Even as Canon’s newest beginner camera adds some enthusiast-friendly updates, its upmarket counterpart is now the EOS 90D — and a 90D in disguise the T8i is not.

The pragmatist in me says, who cares? After all, these specs are perfectly fine for a mid-entry-level camera, and the 90D’s extra megapixels don’t make an important real-world difference, anyway. But while all that is true, the T8i just doesn’t have much to get excited about. There’s little reason for T7i owners to upgrade, and in the three years since that camera released, DSLRs have grown less desirable as mirrorless cameras continue to get better and dominate the market. I suppose the T8i is perfectly adequate if a compact DSLR is what you want, but it really does nothing to make the case that such a camera still deserves to exist.

Available for $749 for the body only or with the 18-55mm f/4-5.6 kit lens for $899 (tested), the T8i is pushing up against some strong mirrorless cameras like the Sony A6100. That leaves the T8i in an unfortunate position. It’s an OK camera that can give you great results, but it’s nearly impossible to recommend given the presence of better alternatives.

From most angles, the Canon Rebel T8i looks identical to the T7i. I like the large, simple mode dial and the power switch that also toggles movie mode. Having the autofocus mode and ISO buttons right there next to your index finger is also great.

You’ll find the sole SD card slot on the right side and all of the connectivity ports on the left, including mini-HDMI (bleh), USB, remote, and microphone. Frustratingly, the camera still uses a Micro USB Type B port rather than USB-C, which has been the standard for a couple of years now.

A control dial has been added around the four-way button cluster, bringing dual dial control to a Rebel for the first time since 2015’s T6s.

But things get more interesting on the back. A control dial has been added around the four-way button cluster, bringing dual-dial control to a Rebel for the first time since 2015’s T6s. That grants the ability to change the aperture directly without using a modifier key, a feature that is important to photographers who like to shoot in manual mode. As the dial also takes over the exposure compensation duties, the exposure compensation button on the T7i has been removed.

Canon also added an AF ON button for back-button autofocus, a shooting technique preferred by many enthusiasts and pros. It seems almost out of place on a camera oriented toward a more novice customer, but I suppose it’s a nice feature to have and gives the T8i a little more room to grow compared to previous models.

Battery life has been slightly improved to 800 exposures with the same LP-E17 battery. In practice, you should be able to get much more than that (I shot nearly 2,000 photos on a single battery charge in my T7i review, so the T8i certainly shouldn’t do any worse).

Otherwise, the T8i is every bit the Rebel that you know and love (or hate). It has a lightweight, plastic body that isn’t weather-sealed, the optical viewfinder is just as uncomfortably small and still only reveals 95% of the frame, and the LCD screen is the same at 3 inches and 1.04 million pixels, although it is a touchscreen that fully articulates.

The few remaining upgrades on the T8i concern movie shooting, starting with the jump to 4K resolution. In the year 2020, is basically a requirement on all but the most basic cameras, and Canon hasn’t done much with it here beyond checking that box on the spec sheet. For most uses, you’re going to be better off sticking with 1080p. The T8i gives you /24p — and that’s it.

As a cinematographer, I appreciate the option for 24p — personally, I rarely use anything else — but most casual shooters would likely prefer 30p for home movies and the like. Does the T8i simply lack the processing power for those extra six frames per second? Maybe. But in a time when our phones are easily shooting /30, it feels odd when a dedicated camera cannot.

It’s perplexing that Canon continues to force just one frame rate in its cameras when it comes to . Previous bodies only gave the option for 30p, and now the T8i only gives the option for 24p. It’s frustrating.

Switching to also crops the sensor pretty significantly, which isn’t great considering this is already an APS-C camera. It’s especially frustrating if you want to try vlogging with the T8i, since you can’t get a wide enough shot, at least not with the 18-55mm kit lens. Now, I don’t think any vlog-style shoot needs to be in , but the mode just feels like an afterthought.

The problems don’t end there. While produces noticeably more detailed footage than 1080, rolling shutter distortion (or “jello cam”) is much worse. This is exacerbated by the fact that the image is cropped, which means the lens’s optical stabilization is less effective. You can turn on additional electronic image stabilization, but this just crops the footage even more.

And while you might think the move to has opened up some processing room at lower resolutions, you’d be wrong. In Full HD 1080p, the T8i still tops out at 60 fps, just like the T7i. This feels like an artificial limitation, rather than a technical one. I don’t want to knock Canon too hard here since I think the camera still meets most people’s expectations for this price, but even the cheaper Fujifilm X-T200 can shoot /30p and 1080/120p.

The T8i has one trick remaining: Vertical video. Yes, you can shoot in-camera vertical video now. Wow. Finally. This isn’t a separate mode — the camera simply detects when you’re holding it in vertical orientation and automatically rotates the video file afterward. That’s no different than manually rotating the video during editing, but I suppose for the busy influencer who can’t spare even a second for post-production, it could be a useful feature.

The T8i has one trick remaining: Vertical video. Yes, you can shoot in-camera vertical video now.

What’s odd is that while you’re shooting a vertical video, none of the information overlays reorient themselves to display upright — and when you play the video back on the camera, the clip still displays horizontally. There’s no indication, neither while shooting nor during playback, that the camera correctly recorded a vertical video. It isn’t until you transfer the file to your computer or phone that you’ll see it displayed vertically.

A rebel no more

For a camera line with such an audacious name, the Canon Rebel has grown tired and old. No longer a bold, risk-taking, adventurous maverick, the Rebel T8i has lost its youthful vigor. Now, it’s a stodgy has-been, content to reminisce about the “good old-days” rather than try to keep up with the times.

And that’s fine. Everything’s fine. The 24MP sensor is fine. A burst rate of 7.5 fps is fine. The 45-point viewfinder autofocus system is totally fine. Canon’s Dual Pixel Autofocus in live view is even better than fine — it makes shooting sharp videos a breeze. (Of course, the disconnect between how a DSLR performs through the viewfinder versus in live view still very much exists, and can make for a frustrating experience for new photographers.)

There is nothing wrong with the T8i, per se. It’s functional enough, and image quality is basically as good as you’re going to get from the APS-C format, so long as your goal is anything other than winning the DPReview test chart. Plus, I genuinely appreciate the control improvements.

The T8i is perfectly adequate … but it really does nothing to make the case that such a camera still deserves to exist.

But it’s just so boring. Canon hasn’t really updated the Rebel’s core DSLR component — the optical viewfinder — since the original Digital Rebel. There has always been room for improvement there, and with Canon’s new focus on professional mirrorless cameras, it doesn’t seem like it’s still important to maintain this spec imbalance between its low- and high-end DSLRs, the latter of which offer larger, brighter, full-coverage finders. If you’re going to keep making DSLRs in 2020 and beyond, then the actual DSLR parts should be as good as they can be, even on entry-level models.

When it comes down to it, the Canon EOS Rebel T8i is still the best Rebel yet — but just. The new controls make for one worthy improvement, but the half-hearted video mode doesn’t do enough to keep the camera current. This is a T7i with minor tweaks, and after three years, that’s not enough.

If you really want a DSLR and your budget is under $1,000, then the T8i is, well, your best option — but it isn’t anything interesting. The small, relatively dark optical viewfinder doesn’t deliver the real DSLR experience, and you can find better specs in similarly priced, smaller mirrorless cameras. You get better battery life on the T8i compared to mirrorless, but that’s about it.

Definitely. You can cover your eyes, throw a rock, and hit a mirrorless camera in the $700 to $1,000 price range that outdoes the T8i in nearly every category. I’d look at the Sony A6100, Fujifilm X-T200, and Fujifilm X-T30, the last of which pushes the price over $1,000 when you add a lens, but is a much more capable camera.

In terms of a direct DSLR competitor, the Nikon D5600 is the closest thing. It’s now under $600 for the body only, but the T8i has the better specs.

Despite the plastic build, Rebel cameras have no problem surviving for years of use. But the T8i is arriving on the scene already outclassed by competitors, which means that even if it doesn’t break, the technology that powers it is far from the top of the line.

No. I can only recommend buying the T8i to people who truly know this is what they want and all they need, which might include owners of pre-T7i Rebels who are casual photographers and don’t want to learn a new camera, or simply those who have a bias against mirrorless. Most beginner photographers and first-time camera buyers will be more comfortable with a .

Topics
The DJI Osmo Action 3 looks nothing like the Action 2
GoPro Hero 11 Black leak suggests a moderate upgrade
The best iPhone tripods for 2022
The best 360-degree camera apps for iOS and Android
How to remove the background from an image
Instagram boss says to expect even more video content
6 awesome Earth images captured from the ISS in July
This GoPro Hero 10 bundle is $100 off at Best Buy today
Watch this Mavic 3 drone soar above the world’s highest mountain
How to watch DJI unveil an all-new drone today
DJI Avata vs. DJI FPV: Which first-person drone is best for you?
Astronaut reveals source of ‘intriguing’ bright light on Earth
Astronaut’s video offers rare fish-eye view from the ISS