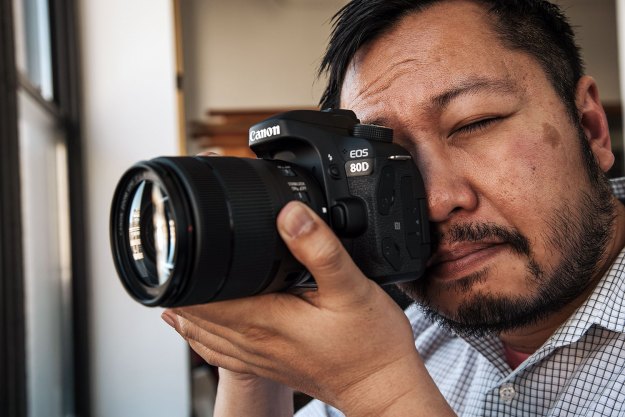 “Unbeatable autofocus puts Canon's EOS 80D at the top of its class for video.”

After almost three years on the market, Canon recently updated the midrange, enthusiast EOS 70D, one of our favorite movie-capable DSLRs. Among the new features, the new EOS 80D has more megapixels, improved video quality, and an enhanced autofocus system. The 80D retains the Dual Pixel CMOS AF system, but this has also been enhanced to deliver improved speed and tracking. Overall, Canon has an affordable enthusiast camera that delivers great imaging results.

Design-wise, the 80D ($1,199, body only) hasn’t changed dramatically from the 70D, and it’s your typical all-black DSLR body style – it looks like every Canon DSLR with an all-black body with a textured finish. Overall it measures 5.5 x 4.1 x 3.1 inches and weighs about 26 ounces without a lens; the dimensions and weight are nearly the same as its predecessor, and we doubt you’ll notice the extra ounce. Yes, it’s bulky, but a lot of photographers like the large grip and substantial body, helping you keep the thing steady when held. (The big changes are inside, which we describe below in detail.)

Indeed, the 80D has a nice feel and balance with Canon’s new EF-S 18-135mm f/3.5-5.6 IS USM ($600) attached, which the company provided for our review. With the Canon EF mount, it accepts close to 100 lenses made for the EOS system. You’ll feel the weight if you attach a lens like the 18-135mm, but it’s surprisingly comfortable if you attach a compact prime lens.

From a usability standpoint, much of what we said about the 70D is applicable here. Only the eagle-eyed will notice the minor cosmetic changes, like some buttons on the back (quick menu, playback, delete) are now rounded. The big noticeable addition you should care about is the headphone port that’s next to the microphone jack, which is useful for shooting videos.

Like the 70D, a highlight is the vari-angle touchscreen LCD, which lets you hold the camera at a variety of creative angles and use your finger to tap on a specific focus point. As befitting a camera geared toward enthusiasts, it also has an LCD on the top deck to quickly check or change your settings. Like all of Canon’s DSLRs, the key controls (white balance, ISO, burst rate and so on) are easily accessed and nicely labeled.

The basic outfit comes with just the body, but the 18-135mm zoom kit is a good option for those starting out. With the 1.6x digital factor, the lens’ range is a solid 28.8-216mm (in 35mm terms) from wide-angle to telephoto. Canon also supplies the battery, charger and strap. Despite its name, the EOS Digital Solutions Disk software (ver. 31.1A) is not included as a disc, but it’s available for download, to manage images and develop RAW files. Canon supplies a printed user’s guide, which you should check out if you’re new to Canon or this type of camera.

Canon offers a one-year warranty for parts and labor. Canon also offers extended warranty through its CarePAK service plans, for an additional fee.

We tested the 80D in a wide variety of settings and shot many stills and video clips, including balloon fests, fireworks, sailing scenes in Newport, Rhode Island, horse shows, and San Diego street scenes (see samples). But before we get into image quality, let’s talk about the 80D’s upgrades over the 70D (still available for $999, body only).

Another major improvement is the jump to 1080/60p Full HD video, from 1080/30p – an issue we had with the older model. Back in 2013, we hoped Canon would improve the quality with its next generation, and it did. But we have to wonder why the company didn’t make a bigger leap, to 4K video; guess we’ll have to wait another three years for the 90D. With that said, the 60p videos are really good.

A big upgrade is the new autofocus system, which has 45 focus points (all cross-type) and covers more of the frame; the 70D had 19. Canon notes the Dual Pixel CMOS AF system has been improved as well, with a bigger buffer for longer bursts and improved tracking ability. This video explains a bit more about the new system, but just realize with better autofocusing systems you’ll get more keepers that are tack sharp, as we noted in our review of the Nikon D500, which had issues with autofocusing. Since we loved the movie focusing of the original 70D with the previous Dual Pixel CMOS AF system, we expected outstanding performance with the new edition – and we got it.

As a traditional DSLR, the key control is the main mode dial with its 12 settings, including Smart Auto, PASM, bulb, two custom options, special effects, scene, creative auto, and flash off. We made extensive use of aperture- and shutter-priority, especially for fast-moving boats and horses.

What’s great about the 80D is that you can use auto and still get quality images and videos. Colors are extremely accurate with nice dynamic range. The 24.2MP APS-C sensor (6,000 x 4,000 pixel files) delivers more than enough depth and detail for the vast majority of shutterbugs. At a press event in Newport, Canon made available high-end printers for us to output some images, and the 17 x 22 prints made from JPEG Fine images were mouthwatering, even with just a minimal amount of post processing.

The 80D is considered an enthusiasts’ DSLR, thanks to its 1/8,000th of a second shutter speed and quick burst rate (7 fps). With this camera you can capture nice action shots – as we did with fence-jumping horses – using shutter-priority. Of course, you can spend even more money for DSLRs like the Nikon D500 or Canon 7D Mark II with quicker burst rates, but with the proper techniques you can grab lots of good action with the 80D. Still subjects are a slam dunk.

As for videos, the camera is almost as good as an old-school camcorder. Autofocusing tends to be an issue in cameras, as it isn’t fast and smooth enough, but the Dual Pixel AF system, used in Live View mode, is outstanding. You don’t even have to think about focusing as the camera does all the work, no matter if it’s fireworks in the night skies, horse riders, and watercraft speedsters. Color is spot on too. The Full HD 1080/60p clips are beautiful during playback, with no issues of rolling shutter or jelly effects.  Would we like a 4K option? Of course, but the 80D’s movies are still tops in class. And, having a headphone jack is really handy, as well. The one thing we wish it had is the ability to monitor sound levels on the main LCD screen (you have to hit the quick menu to see it, and there doesn’t seem to be a way to turn it on in the settings menu).

As mentioned, the 80D has a native ISO range for stills of 100-16,000, but you can customize the settings to reach 25,600 if you feel like pushing image quality to its limits. We’d avoid it, as our test subject was very pixelated with dramatic color shifts at very high ISO. There’s a reason Canon buries this setting in the menu. As for more “normal” options, we feel good using the ISO 4,000 setting, with 6,400 the limit. With a nice wide aperture lens (low f/stop) you should have no problems shooting in low light without a flash.

This 80D offers NFC connectivity along with Wi-Fi. We weren’t thrilled with the 70D’s wireless connectivity, but it’s better in the 80D. There still isn’t a dedicated Wi-Fi button, but you can find it in the quick menu. Initial, one-time setup (up to three mobile devices) was relatively straightforward with an iPhone 6S, although it might require some menu-drilling or referencing the instruction manual. It’s slightly faster with a Samsung Galaxy S6, since we could use NFC; you’d still need to manually connect the phone to the camera when using a Wi-Fi direct connection, however.

Once connected, you can transfer JPEG images from the camera, and control the camera remotely. Canon has done away with its various apps, and consolidated them into the Camera Connect app that works with all new Wi-Fi-enabled Canon cameras. With the app, you can change settings like ISO and white balance, select a focus area, as well as focus manually.

The battery is rated 960 shots – good, but not great. It’ll get you through a day’s shooting, which is the most important thing.

As for the 18-135mm lens, it is very quiet when autofocusing, thanks to a new ultrasonic motor. You can barely hear it, which is key for video since you don’t want to hear the focusing motor. Compared to a less expensive lens like Canon’s plastic “nifty-fifty,” you’ll notice the speed and noise advantage of the 18-135mm. We wish the zoom ring was less stiff, as the camera’s mic picked up that noise when we zoomed in and out. Canon offers the optional Power Zoom Adapter than can control the 18-135mm’s zoom function for even smoother, quieter performance. But, for shooting videos, definitely use a stronger lens with a quiet motor.

The 80D is a proper upgrade to the 70D, and retains the Editors’ Choice. It may not look different, but there are significant improvements under the hood, namely the autofocusing, superior stills, and Full HD videos that are top-notch. The 80D is a nice step-up for entry-level Canon Rebel DSLR users, but the enhancements are also worth considering if you own the 70D or other older enthusiast-level Canon DSLRs. We highly recommend it for enthusiasts as well as those looking for a relatively affordable photographic tool they can grow into.