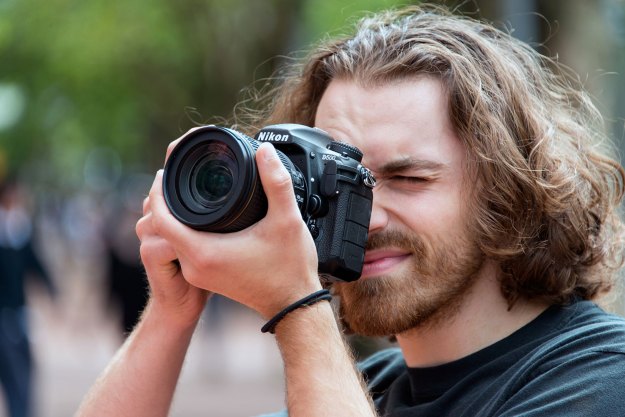 “Nikon's D500 is the best enthusiast DSLR ever built.”

The 20.9-megapixel D500 ($2,000, body only; $3,070 kit with AF-S DX Nikkor 16-80mm f/2.8-4E ED VR zoom lens) is Nikon’s newest enthusiast DSLR and, to date, the best DSLR with an APS-C sensor (DX-format, in Nikon terms, versus FX-format for full-frame). Although the company has many more options with higher resolution, such as the D7200 (another APS-C DSLR we like), this one is so crammed with goodies it puts them – and many competitors – in the backseat.

When you’re in DSLR territory, stylish design is not an emphasis. The all-black D500 looks like every other Nikon DSLR geared toward enthusiasts, including the red Nikon trademark on the grip and a faux-leather textured finish. It’s big and bulky, measuring 5.8 x 4.6 x 3.2 inches and weighing about 27 ounces for the body alone. Add a battery and lens and the scales climb mightily. This is no surprise as most weather-sealed DSLRs with magnesium alloy frames are quite substantial – the size and weight is similar to the full-frame D750.

There’s no shortage of quality Nikon glass for the D500’s F-mount. During our tests we used fisheyes, 400mm telephotos, other primes, and a variety of zooms; a 16-80mm f/2.8-4E ED zoom was used most often as well as the 18-300mm f/3.5-5.6G ED model. These are DX lenses, but the D500 will work with full-frame FX lenses as well. There are a number of other controls on the front of the camera, but the most critical is focus control on the side of the mount (more on this later).

The top deck has a large LCD readout to quickly check your settings. There’s a hot shoe (no built-in flash) and a two-tiered control dial. The top dial accesses Quality, Metering, Mode, and White Balance, while the bottom portion lets you quickly change burst and quiet modes, self-timer, mirror-up (to help minimize camera shake), and other settings. On the grip are the shutter, power on/off lever, and buttons for video record, ISO, and exposure compensation. There’s a jog wheel below the shutter and another on the back.

Nikon pulled out the stops for this APS-C DSLR and it really shows.

The rear has a 3.2-inch tilting touch-capable LCD rated 2,359K dots, which is about as good as it gets in 2016. The optical viewfinder is also sweet with 100-percent coverage and 1x magnification; it’s large, bright, and very comfortable to use. There are myriad buttons flanking the LCD along, including the Live View controls for stills and videos.

On the right side is a compartment with two card slots, and it’s here that you get a better idea how advanced the D500 really is. One slot accepts standard SD while the other supports the new XQD 2.0 format. Nikon provided a 64GB Lexar XQD card (which sells for around $100) that’s rated 440MB/s, far quicker than the fastest UHS-II SDXC card. This came in handy as we ripped off long bursts of 5,518 x 3,712-pixel stills, at 10 frames per second (fps). At no point were there hesitation in writing images to the card; it was really impressive. We hope to see more manufacturers embrace this standard but right now it’s just Sony with a few pro camcorders, as well as Nikon with the D500, D5, D4, and D4S DSLRs.

There are three compartments on the left for USB 3.0, HDMI, mic and headphone connections. On the bottom is the compartment for the battery, which is rated a hefty 1,240 shots. Given the fast burst rate and video, a spare makes sense although we did make it through most days without the battery giving up the ghost.

You’ll find the body, strap, battery, plug-in charger, USB cable, cable clips, and caps. There’s also a 400-page user’s manual for bedside reading; this is a sophisticated piece of gear so checking out the manual is a great idea. Nikons offers a free download of NX-D for RAW file conversion as well as View NXi for photo management. Also download the new SnapBridge app for sending images to your . Unfortunately, it’s Android only at this point as the iOS version will be available later this summer, according to the company.

Nikon offers a one-year warranty for parts and labor.

The 20.9MP D500 features Nikon’s new Expeed 5 image processor. We gave the camera a workout over several weeks – including a few days of training with Nikon experts in Palm Springs, California – shooting a variety of subjects. (Disclaimer: We were guests of Nikon, but all opinions are our own.) Along with the D500 body, we had access to a ton of lenses, as well the new Nikon SB-5000 AF Speedlight. As mentioned, attaching even the relatively small 16-80mm zoom and a flash takes the 27-ounce camera to another level, but for the most part we had little trouble handholding the rig. When it came to the 400mm telephoto, however, a monopod was essential.

If you like shoot action, this camera is for you. Since one of the D500’s big claims to fame is its 10-fps burst mode, we had the opportunity to shoot race cars, polo players, and skateboarders – typical Palm Springs subjects. Along with fast action, there were dramatic desert landscapes, zoo animals, and croquet players to photograph. Afterward, Nikon provided us with an extended loan (including 16-80mm and 18-300mm zooms) for extra testing under our own conditions.

We didn’t quite fill the 64GB card but we took tons of stills and videos. The results, for the most part, were spectacular, especially the stills. Colors were right on the money and the number of keepers we grabbed far exceeded any camera we’ve recently tested, even the fabulous Sony A6300. The two aren’t direct comparisons in many ways but both shoot 10 fps. Being a DSLR, the D500 is more robust and it captures 200 JPEGs before slowing down. The much smaller and less expensive A6300 can only do 44. Since this is a high-end DSLR it has a top shutter speed of 1/8,000th of a second and features Nikon’s latest 180K RGB metering that’s found in the more expensive D5.

One thing that sets the new Nikon apart is a 153-point autofocus array. It is breathtakingly fast and accurate, and it’s the same system used in the $6,500 Nikon D5. By adjusting the AF control, you have options for 25, 72, and 153 points. We used the 153-point Group setting most often. Check out the samples and you’ll see how crisp and sharp the resulting images are, thanks to the AF system.

The camera is designed for enthusiast photographers, so it’s no surprise the D500 has only PASM settings – no handholding scene modes here. One feature of note: a top ISO setting of 1,640,000! Although the native range is a more sensible 100-51,200, you can go below to 50 and all the way up to the top mark.  This is about as high as it gets for mainstream cameras; the $6,500 D5 hits 3 million-plus. Who would need this level of high-sensitivity? Think law enforcement. As you can imagine, shots taken at top ISO (H5.0 setting) are useless without extensive post processing, so it’s not for everyday use.

More realistic are the images at lower points. We had clean shots up to ISO 12,800 with digital artifacts becoming more noticeable as we moved up the scale – 32,000 would be as far as we’d go. At 51,200 the color shifts are far too dramatic for out-of-the-camera use. JPEGs at 1,640,000 were akin to bad abstract paintings. That said, you won’t miss much in low light if you can shoot at ISO 20,000 with a quality wide-aperture lens.

This DSLR takes video at 3,840 x 2,160 pixels (UHD) and 30p, using the MOV format. The quality is quite good with very accurate colors and detail. But – and this is a big but – the autofocus is not the best for this situation, as it is with still photography. We used the 153-point Group setting and zoom constantly moves to focus properly – and the lens motor noise is picked up by the built-in mics if you’re shooting a quiet scene. The clips aren’t bad but manual focus is recommended and this is a skill that requires practice and patience. (In general, for many DSLR videographers, manual focus is preferred when video is concerned). In auto you won’t get the super sharp focus of a like the A6300 or the Canon EOS 70D/80D with Dual Pixel AF technology. Realize this DSLR is primarily built for stills but with the right technique, you’ll get some fine video.

Practically every high-end camera has Wi-Fi and connectivity and so does the D500. Nikon’s new SnapBridge system goes a bit further by adding Bluetooth as well. Now your or tablet can quickly pair with the camera, and low-level functions are handled via Bluetooth (more intensive tasks, like image transfers, would still require Wi-Fi). Our sample was a little pokey at first and it took a few attempts to pair the DSLR with a Samsung Galaxy S5. When we got it working, it downloaded images to the phone very quickly (over Wi-Fi). When you sign up for a Nikon ID you get cloud storage and the app lets you control the camera remotely. As noted earlier, there’s only an version of the app but Apple fans have no worries, Nikon says it’ll arrive this summer

Camera reviewers tend to get jaded as we play with the latest toys all the time, often questioning whether a new product is as good as a company claims. Well, Nikon has certainly delivered a lot with the new D500. Given the quality of the stills, it holds its own against more expensive full-frame cameras. This camera is a slam-dunk for Editors’ Choice winner, and, depending on what comes down the road, it is a contender for the Camera of The Year. Nikon pulled out the stops for this APS-C model and it really shows. Note: Don’t expect any deals whatsoever for the D500 as the body-only configuration is currently backordered almost everywhere you look.