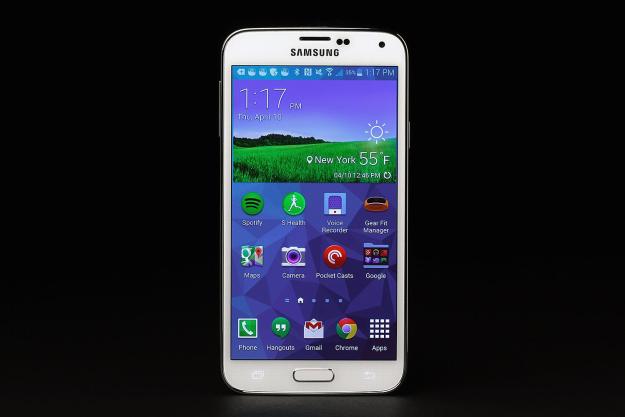 “The Galaxy S5 is another win for Samsung. If you’re looking to upgrade, there are a lot of watertight reasons to choose GS5.”

Samsung has sold more than 200 million Galaxy S phones around the world. It’s a staggering number, outweighed only by cumulative sales of the iPhone, and with  the Galaxy S5, Samsung hopes to keep that number climbing. But does it live up to the legacy, or is merely a warmed-over S4? We’ve got the answers.

Still a plastic Galaxy, but with a few surprises

If metal casings and fancy design embellishments are your thing, the Galaxy S5, like all Galaxy phones before it, is not for you. This is another plastic Android phone from Samsung. Aside from the golf-ball-like dimples on the back and some running lines on the sides that give it a classic-car look, the GS5 looks almost exactly like the GS4 … and the GS3.

The GS5 may not look different, but there’s a lot to love.

Fortunately, we don’t buy phones solely for their looks (most of us). The GS5 may be plastic, but it hides a few new hardware features.

The GS5 has an IP67 waterproof and dustproof rating, a heart-rate monitor under its rear camera, and a fingerprint sensor inside its Home button. These are all real advancements that could be useful to real people. This is in stark contrast to Samsung’s Galaxy S4 unveiling, where it concentrated on numbers and a bunch of apps that nobody wanted or cared about.

Waterproof: Last year, Samsung released the GS4 Active as a waterproof and dustproof variant of the Galaxy S4 model. It’s still one of our favorite phones on AT&T, and we’re very excited to see the standard S5 pick up this superpower. You won’t have to worry about your phone if it’s raining outside, you’re shoved into a pool (it can happen), you drop it in quicksand, or you want to check if your girlfriend or boyfriend returned your Facebook message while you’re in the shower. Less worries means more happy. We’ve dunked the GS5 a couple times and it’s still working fine. We’re waiting for a rain storm.

Heart-rate monitor: Not everyone will use or care about this feature, but if you want to check your heart rate after a workout, or for medical reasons, you can easily do so with the GS5. It has a small red light that shines through your finger on the back of the phone. The built-in S Health app will record your heart rate every day. The heart-rate monitor appears to work well. We haven’t had any false reads, but did discover that we have a fantastic resting heart rate.

Samsung’s fingerprint scanner also has the ability to let you make FIDO payments over its system or PayPal, which is more than Apple lets you do, but it’s clear that it will be a few years before fingerprint scanners become a thing you truly want. Right now, it’s a nice way to unlock your phone. We haven’t had a lot of difficulty unlocking our phone, but again, the Home button is very low on the device, so swiping downward on it is not a lot of fun.

We like new bells and whistles on the outside of a phone, but we also appreciate that Samsung has cleaned up the inside, too. The Galaxy S5’s user interface is simpler and cleaner than previous devices. It’s easier to find features, and the Settings menu has a new gridded view that makes a lot of sense.

Some of the lesser-known features on previous phones are now buried in the menus, but if you want things like the Smart Stay feature, where your phone looks to see if your eyes are staring at the screen before going idle, they are still in the Settings menu.

The Recent Apps screen and Notification menus also look cleaner and give more space to what matters, like incoming notifications. And if you want a real simple mode, you can make the icons extra big by turning on an old-folks mode that comes with a built-in magnifier.

Since there is only 16GB of space on the phone, we’re very happy that the unit we tested only had 55 apps installed on it. That’s a move in the right direction from the 70 or more apps most phones had pre-installed in 2013. Samsung has kept a lot of its own apps intact, but isn’t shying away from Google apps, either, with a folder full of them on the main home screen.

Overall, Samsung’s new interface is classier, less cluttered, and easier to use than it was on the Galaxy S4. It’s still a little busy compared to Google’s lean Nexus 5, but some of the new features, like Ultra Power Saver Mode, are very useful.

We’ve used Samsung’s new Ultra Power Saving Mode, which will help you conserve battery life in a jam. It’s the most intense battery-saving mode we’ve ever seen. It shuts down all services except a few vital ones, and turns the screen black and white. But according to Samsung, it can squeeze a full 24 hours out of a nearly empty battery.

Hardcore geeks may be disappointed in the Galaxy S5’s spec sheet, which breaks no new ground this year. It appears to be as powerful as top devices like the Galaxy Note 3, LG G2, and Sony Xperia Z1S, but no more so.

This is the sharpest, best-looking screen we’ve seen on a phone.

The Galaxy S5 has a 5.1-inch 1080 x 1920 pixel Super AMOLED screen. This is the sharpest, best-looking screen we’ve used on a phone. The combination of the redesigned interface based around solid colors, AMOLED deep blacks, and Full HD resolution is a winner.

Inside the phone is Android 4.4.2, a 2.5GHz quad-core Qualcomm Snapdragon 801 processor, which has improved battery life by about 40 percent, 2GB of RAM, 16GB of internal storage (10.7GB are usable), a 2.1-megapixel front camera, a 16-megapixel rear camera, a 2,800mAh battery (300mAh greater than GS4), NFC, an infrared sensor for TV control, a Micro SIM slot, and a MicroSD slot so you can expand storage by up to 128GB.

The battery has held up well for us so far; a day of light to medium use drains it to about half.

We have a few random, small complaints to make, so we’ll make them here.

Rear speaker: The rear speaker on the GS5 is not particularly great. Like the GS4 before it, this phone was totally outsung by the HTC One M8.

Headphone jack up top: The HTC One, iPhone 5S, and many other phones are putting the headphone jack on the bottom instead of up top. This makes it more natural to put and pull the phone in your pocket while listening to music.

No KnockOn: LG introduced the KnockOn feature that lets you double tap the screen to turn it on. We love this and were happy to see HTC implement it on the new One M8. Samsung doesn’t have this feature yet, but it would be nice.

A lot of Samsung services: Samsung has backed off a little, but it is still heavily pushing its own Samsung App Store and services. If you’re a bigger fan of Google’s Android services, be prepared to change a few default settings to get the Google back in the GS5.

Camera does the job

Samsung’s 16-megapixel rear camera is an improvement from the GS4. It performs far better in low light, and is able to see almost as well in the dark as I can. It still doesn’t outshine the iPhone 5S, but it’s the best camera in a Samsung Android phone we’ve used yet (the Galaxy S4 Zoom doesn’t count, guys).

It’s not perfect. Compared to some of the advances HTC and others have made, the Galaxy S5 falls behind. Its front camera is only 2.1 megapixels, while the front cameras of many new phones have hit 5. And if you’re into refocusing your pictures after you take them, the GS5 pretends that it can do this too, but it can’t. Samsung just uses software and a blur effect to mimic the Lytro-like features that HTC has on a hardware level.

We haven’t had any reception, LTE, or talking issues on the Galaxy S5. Our test unit was on AT&T’s network, which seems to be improving in the New York City area. Those we test called all reported a clear, reliable sound on the other end.

The Galaxy S5 is a fantastic phone. It doesn’t look different, but there’s a lot to love. For the first time, Samsung is innovating like Apple, instead of just mimicking it. Last year we got a bunch of new apps, and with the Galaxy Pro tablets at CES we saw a stupid new interface, but with the GS5, Samsung has taken a hard look at what people really want from its phone and tried to deliver a compelling new product that focuses its efforts on a few great features.

If you have a high-end phone from last year, there is no reason to rush out to buy the Galaxy S5, but if you’re in line for an upgrade, this is the only flagship phone with a waterproof exterior on all four major carriers. T-Mobile has the Xperia Z1S, which is great, but outside of that, it’s GS5 or a cheaper device. It’s also the only phone with a heartbeat monitor, if that’s your thing. Overall, Samsung isn’t reinventing the wheel, but the Galaxy S5 is a fantastic new phone to buy and a definite contender for phone of the year.