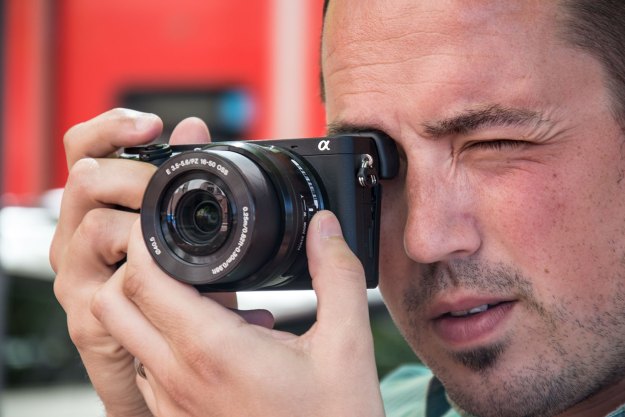 The Sony Alpha A6000 is one of the most popular mirrorless interchangeable lens cameras available. We aren’t surprised, considering it is one of our favorite cameras, and earned our Editors’ Choice award. Following up two years later, Sony recently introduced a much more featured-packed – and expensive – model to the lineup. The A6300 ($1,000, body only) touts blazingly fast autofocusing and 4K video capture, making it not just another tantalizing mirrorless option from Sony, but one of the best mirorrless cameras you can buy from any company.

The all-black Sony A6300 looks similar to the A6000 and, to a degree, the A5000/A5100, although it has a more sturdy, weather-sealed magnesium-alloy body that adds a bit of heft. It won’t strain your arms, as it weighs 14.3 ounces with battery and card (minus the lens). That is, until you attach a premium lens, such as Sony’s new 85mm prime or 24-70mm G Master glass we used for our tests. But for everyday shooting, you can use a compact prime lens that keeps the package light.

Overall dimensions are 4.7 x 2.6 x 1.9 inches, so this mirrorless ILC is small, especially when compared to an enthusiast-type DSLR such as the Nikon D7200. The camera has a faux leather texture on the sizable grip. We found it comfortable to hold in this reviewer’s hands, but definitely give it your own try, if possible.

The A6300 demonstrates why Sony continues to dominate in the mirrorless camera market.

Speaking of lenses, Sony has made a major push in developing a range of glass for the E-mount. They range from the affordable, such as the included 16-50mm kit lens ($1,150) in our review unit, to the new, uber–high-end G Master series that cost close to $2,000 each! Besides the mount, other features on the front include stereo mics, an AF Assist lamp, and a remote sensor.

The top-deck has a hot shoe, a pop-up flash, main mode dial, and a scroll wheel for making camera adjustments. The on/off lever, shutter, and Custom 1 buttons are on the nearby grip.

The back has two key features: a .39-inch OLED electronic viewfinder with a large eyecup and a 3-inch tilting LCD monitor. The EVF is rated 2.359 million dots, which is about as good as it gets. The bigger screen is rated 921.6K dots, which is a decent spec but there are better displays out there. The one big negative, however, is it’s not a touchscreen, which is something we lamented about the A6000.

The rear has the usual collection of buttons including Fn (Function) to quickly access settings and a jog wheel with center OK button. The four points of the wheel let you change ISO, exposure compensation, burst mode, and display options. On the right edge is a recessed tiny red-dot button for recording video – another design flaw we’ve complained about for years because it’s hard to press. We just designated one of the Custom keys for the same function, so that issue is fixable. On that note, the camera offers loads of customization, so you can tweak it to your liking.

The camera has built-in Wi-Fi and on the right side is the NFC tag for pairing with Android devices. The left side has a speaker and a compartment for USB and HDMI connections, as well as mic jack. On the bottom is the battery and SD card slot. The battery is rated a solid 350 shots per CIPA so you should be fine for a day’s shooting. If you plan to shoot 4K video or you want speedy performance, use a high-performance SD card.

If you purchase the kit, you’ll find the camera body, 16-50mm f/3.5-5.6 optically stabilized lens, battery, strap, cap, eyepiece cup, and USB cable. Kit lenses aren’t the best, but if you’re new to interchangeable lens cameras, the $150 premium is good way to get started; existing Sony E-mount users can just bring their own lenses (more on this below). Sony offers downloads of Capture One Express software for handling RAW files as well PlayMemories Mobile for pairing iOS/Android devices.

Sony offers a one-year warranty for parts and labor.

We had the A6300 for two sessions – one as part of press preview in Florida and another with the kit lens in our home location. During the Florida excursion we had the chance to use two of Sony’s newest high-end lenses from the G Master series, the aforementioned 85mm prime and 24-70mm zoom. They are two of the sweetest lenses we’ve used in a long time and are highly recommended, but note the prime costs $1,799 while the zoom is $2,199. This brings your outfit to more than three-grand, so you’d expect outstanding results – and the gear delivered (see samples). For pros and enthusiasts, these G Master lenses complement the A7-series nicely, like the A7 Mark II, A7R II, and A7S II, but for a mid-level camera like the A6300, you’ll have to check your budget. Don’t fret: Sony makes other quality lenses that are more affordable.

When Sony arranges a preview they typically offer more to shoot than static flowers and trees. In Florida we had beachside models, actors in Miami-motif costumes – think Miami Vice and CSI: Miami – wake boarders, beautiful street art, musicians and dancers, and so on. We gave the camera and lenses an intense workout. While the A6300 isn’t in the same class as its A7-series full-frame cousins, it’s a very strong camera in its own right, and these lenses bring out the best of what it can achieve. The A6300 is also compatible with Sony A-mount DSLR lenses via an optional adapter, although it may not be compatible with all autofocus functions.

Unfortunately, the A6300 lacks any advanced image stabilization (IS) system like the 5-axis system found in the latest-gen A7 cameras, so you’ll need to either bring along a tripod or invest in a lens with built-in optical image stabilization, particularly if you’re shooting video. But with its speed and the strength of the G Master lenses, the A6300 performed well without built-in IS.

For our home location, with the 16-50mm zoom (24-75mm equivalent in 35mm terms), subjects weren’t nearly as exotic. We’ve used and tested this particular lens for years, and find it suitable for someone who’s just starting out. As we alluded, however, the enthusiast-level A6300 is a bit higher-end than the entry-level A5000/A5100, so anyone considering purchasing it should expand the budget to include a good Sony G or Zeiss lens, in addition to or in lieu of the kit option.

Moving to internal specs, the camera features a new 24.2-megapixel APS-C sensor with the Bionz X processor, and it’s quite speedy. The enhanced performance is due to a new copper wiring design that increases light sensitivity and speed. Helping to grab focus is a new 4D focusing system with 169 contrast-detect and 425 phase-detect AF points, which, at the time of product announcement, is the fastest currently available, Sony claims. Whether it’s true or not, we had no problems grabbing sharp images of wake boarders and athletes flying through the air, thanks to the 11 frames per second (fps) burst mode. Shutter speed ranges from 30-1/ 4,000th of a second, ideal for most everyday sports action. With that said, enthusiast DSLRs hit 1/ 8,000th of a second, so if shooting race cars are your primary thing, you might want to go another route.

Also cool is that the A6300 is robust, capturing up to 44 extra fine JPEGs or 21 RAW+JPEG images before slowing down. Better DSLRs may do more but the bodies are bulky and twice as heavy, so keep that in mind.

The camera really impressed us during a model shoot. One shot of a model came out absolutely fantastic, if we don’t say so ourselves. When we enlarged the shot, we said to some nearby photographers in a makeshift photo lab that there really was no need for full-frame sensors, unless you were doing pro work; they all concurred – the stills from the A6300 and the high-end glass are off the charts.

Video is another area where the A6300 excels. Using the XAVC-S codec, you not only can capture 4K (3,840 x 2,160) movies but slow motion as well. For this test, we captured gymnasts and their gyrations in slow motion, and it is fun to watch how they executed their moves in this way. This is a great feature but unfortunately Sony makes it extremely hard to use, with a menu/control system that seemed to be designed by engineers. We had the same complaint with the RX100 Mark III and Mark IV, so let’s hope Sony changes the UI in the next camera that offers the feature.

The A6300 is simply one of the best, new mirrorless cameras we’ve tested to date.

The 4K movies are sweet, without the jelly and rolling shutter effects of Full HD cameras. We’ve always been impressed by the high-bitrate XAVC-S codec and the A6300’s results are smooth, fluid and accurate. The A6300 also offers high-end controls for serious filmmaking, including time codes, S-Gamut/S-Log for post-production work, as well as a mic terminal for optional microphones, so if you’re a YouTube content creator, take note. We recorded some musicians in difficult light but the results for the most part were quite good.

The A6300 has a native ISO of 100-25,600, expandable to 51,200. In our tests with the kit lens, digital artifacts started to appear at ISO 2,000, and then images slowly deteriorated at ISO 8,000 when color shifts and speckles dominated the frame. As you would imagine, ISO 51,200 was unusable. But the ability to shoot in available light at ISO 5,000 is quite good. Again, this is another reason for buying good glass with wide apertures. Compared to full-frame cameras with larger sensors that pull in more light and detail, this is one deficiency of APS-C sensors – not that the A6300 is bad, mind you.

The PlayMemories Mobile app goes beyond the usual remote shooting and photo uploads. Paired with an iOS or Android device, Sony also uses it for firmware updates, tips, and sales pitches. We had no issues pairing a Samsung Galaxy S5 using Wi-Fi but NFC is an option is you’d prefer that route. Nothing revolutionary on this front – it works well, as it has in the past – but new is a QR-code scanning setup system.

Has Sony created another hit? The A6300 is simply one of the best, well-rounded mirrorless cameras we’ve tested to date, so we would say, yes. Sony currently dominates the mirrorless camera market, and with continual product offerings like the A6300, it’s not hard to see why. It’s far from perfect, but we wouldn’t hesitate recommending it.