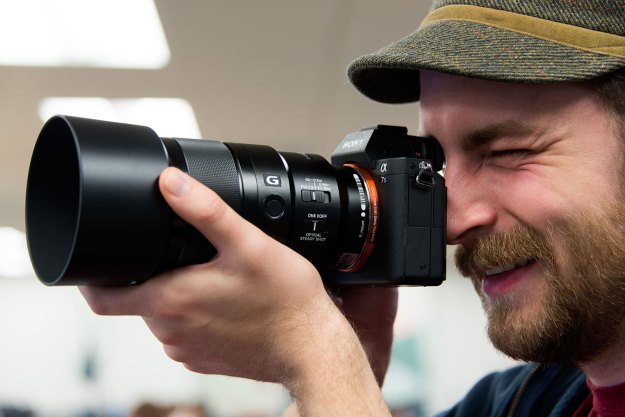 With the new 12.2-megapixel A7S II ($3,000, body only), Sony completes its second-gen updates to its fantastic A7-series. We have the A7 II, a sub-$2,000 full-frame mirrorless interchangeable lens camera with 5-axis image stabilization. Then there’s the A7R II, which is all about high-res image quality, thanks to the 42.4-megapixel sensor.

Then, there’s the A7S II. Each A7-series model has a customer in mind, and the A7S II is for low-light enthusiasts. It lets you crank the ISO up to 409,600. Insane, we know, but there are photographers and videographers who could use the function – concerts, indoors, etc. Truth be told, most people would never go into the six-figure settings, but it’s there, and it works.

The A7S II is markedly improved over the A7S. The newer version adds built-in 5-axis image stabilization as well as the ability to record 4K video directly to memory cards, rather than an outboard HDD. But unlike the A7 II and A7R II, the A7S is more of a niche product that isn’t for everyone

Externally, the all-black A7S II looks like all the recent members of the series, especially the A7R II. It has a magnesium-alloy chassis and textured finish on the grip, and it’s a relatively small mirrorless camera (4.7 x 2.7 x 1.5 inches) that weighs 22 ounces (with battery and card). It’s no featherweight once you attach an E-mount lens, but it’s much lighter than a full-frame DSLR, in comparison. As for E-mount lenses, you have 13 Sony full-frame (FE) options to pick from, as well as Sony A-mount (via adapter) and third-party lenses; Sony provided the FE f/2.8 90mm macro ($1,099) and FE f/1.4 35mm ($1,599) for our review.

Along the top and back, you’ll find a variety of buttons and features typical of a high-end shooter, including buttons for custom settings, an exposure compensation dial, and a mode dial with 10 shooting modes.

Accompanying the tilt-screen LCD is a 0.51-inch OLED electronic viewfinder (EVF) with diopter control, with a fine resolution of 2,359,296 dots and Zeiss T* coating – a major upgrade from the original A7S. The EVF is very responsive, with accurate colors. Although not as crisp or instantaneous as a DSLR’s optical viewfinder, it worked well on most occasions. The LCD itself is solid with a 1,228,800-dot resolution, and we had no reflection issues with the Sunny Weather setting engaged. It’s not a touchscreen, however, which would have been preferable.

Like its A7-series siblings, the A7S II’s photos and videos shine.

On the right edge, by the thumb rest, is the tiny red-dot video record button. We’ve always disliked this placement because it’s hard to reach and way too small. Do what we do: reassign the function to another button, like one of the custom keys.

The right side has a compartment for the memory card and the NFC tag. Definitely use the fastest, largest-capacity card you can afford, especially if you’re shooting 4K video, which requires an SDXC card. The left-side compartments have headphone and mic jacks as well us USB and HDMI connections.

The supplied power pack is good for 310 shots if you’re using just the viewfinder, or 370 for LCD-only operation. We found the camera drank a lot of juice shooting video and in burst mode, but Sony supplies two batteries, just like the A7R II.

Sony supplies the body, two batteries, AC adapter/charger, strap, various caps, an eyepiece cup, and USB cable. Not included is software; PlayMemories Home has to be downloaded to handle files, as do the manuals. PlayMemories Mobile should also be downloaded to pair your smartphone/tablet with the camera (iOS/Android are available, naturally).

Sony includes a one-year warranty for parts and labor.

Unlike the A7R Mark II’s 42.4MP full-frame sensor, the A7S II uses a 12.2MP full-frame chip (4,240 x 2,832 pixels). The lower pixel count gives the camera a huge sensitivity boost, up to 409,600 ISO – just like the original A7S, the most of any digicam this side of the defense department. Since the A7S II now has built-in 5-axis image stabilization you can take shots in near darkness and not worry about blurry images – in theory, of course. But it’s not too far off the mark, as we discovered during our tests.

The native ISO range is actually 100-102,400, but you can extend it to 50 or all the way up to 409,600, in any PASM mode. It sounds impressive, but when you actually use settings at 204,800 or 320,000, you’ll see more digital artifacts and spots – not pleasant to look at. However, the results up to 64,000 were as good as we’ve ever seen, although far from perfect; at 12,800, we captured a night shot (see last sample photo) that could easily be mistaken for daylight, and despite some artifacts when viewed at 100 percent, it looks good. Go beyond that the noise levels and color shifts were very dramatic, but in a bad way.

Our recommendation: Couple the A7S II with a wide prime and you’ll get some fine results in very low and uneven light, between the 40,000-64,000 settings. Don’t forget that the ISO applies to video too. If you’re handholding the camera, the built-in 5-axis image stabilization helps deliver sharper images at low ISOs and slow shutter speeds.

The 409,600 ISO is like driving a Ferrari in traffic – nice to have, but pretty useless in the real world.

Although the A7S II has less than one-third of the A7R II’s pixels, photos exhibit excellent colors even when enlarged to 100 percent. Once you move into full-frame territory, color quality, detail, and dynamic range are practically a given. With a recent firmware update, the A7S II can shoot compressed and uncompressed 14-bit RAW. We feel anyone shooting still images with this camera will be pleased. But, the A7S II is really not for action photography: Although it has an excellent shutter speed range (30-1/8,000th), the quickest burst mode is 2.5 fps with full autofocus, or 5 fps in Speed Priority mode. We had limited success in capturing actors at a local theater company, even with the ISO pushed to increase shutter speed. The A7S II has a 169-point Fast Intelligent contrast detect AF system rather than a hybrid with phase detection, which might account for the slower reaction. There are no issues with more stable subject matter, however, such as landscapes. Also, there was definite lag in the EVF in dim light, which is somewhat annoying.

Video is where the A7S II really shines. It’s one of the few cameras offering in-camera 4K video with full-pixel readout, rather than just using a portion of the sensor. And unlike the original A7S, movies are recorded directly to the card, rather than an outboard hard disk drive – a huge improvement. It uses the XAVC-S codec and the top setting is 3,840 x 2,160/30p at 100 Mbps, and you’ll need a fast, high-capacity SDXC card to process all that information. It also captures 60p Full HD for those who haven’t taken the 4K plunge. We found the video quality at both settings to be off-the-charts good. If movies are key criteria for your next camera purchase, the A7S II has to be part of the discussion.

The A7S II has built-in Wi-Fi/NFC capabilities for linking to a smartphone or tablet with the PlayMemories Mobile app. Wi-Fi pairing with a Samsung Galaxy S5 is fast and straightforward once you enter the generated password. Sending stills from one device to another is a no-brainer. The company tries to enhance its app beyond the basics including access to instruction manuals, third-party apps such as PopCam, and regular updates

Just like its predecessor, the A7S II earns our Recommended badge, given the enhancements. There’s a lot of cool technology and it’s a great-performing camera, but it isn’t for everyone. This camera is geared to specific shooters who really like capturing images and videos in dim light. It’s also a great videography camera for shooting 4K and Full HD. That said, 409,600 ISO is like driving a Ferrari in a Manhattan traffic jam – nice to know you have the horsepower but pretty useless in the real world. Unless you need the low-light prowess, Sony’s A7R II is the better option for the money. That sibling camera has similar features and a max ISO of 102,400, which is more than enough for most people.

The best 360-degree camera apps for iOS and Android