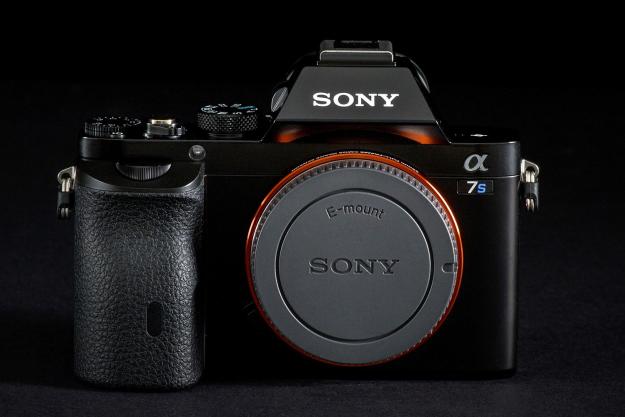 “Wedding and event photographers should jump on Sony’s A7S thanks to its quick response, along with outstanding image and movie quality.”

Sony’s newest full-frame mirrorless camera drops the megapixel count but dramatically raises sensitivity (ISO) capability to nose-bleed heights. Not only that, it records 4K and XAVC-S video. Now should this be your next camera—and is it worth the price?

But for $1,000 more, the new A7S features some pretty radical technology. The new 12.2MP full-frame sensor has been “optimized” for 4K video and low light according to Sony, and has a new RGB filter with gapless on-chip lens design, as well a new Fast Intelligent AF system. We’ll get into what these mean in the Performance section. Given these capabilities — and price — this camera is really for wedding and special-event photographers or videographers, or anyone who likes shooting in very dim surroundings. Not many will use the 409,600 setting, but you can be pretty confident your shots won’t be blurry in low light using ISO 51,200 and a wide-aperture lens. Street photographers take note: It also has a new Silent Shooting mode for taking images in museums, concerts or wherever discretion is important. And it is dead quiet.

The key feature on the front is the Sony E mount. The company has five full-frame lenses available and there are third-party suppliers as well. Our review kit included the body and Zeiss Vario-Sonnar f/4 24-70mm ($1,199) and the Zeiss f/1.8 55mm prime ($999).

The camera’s measurements are similar to others in series, 5 x 3.75 x 1.9 in inches, and weighing around 17 ounces without a lens but with battery and card. There’s a decent-sized grip, but since this is the “smallest full-frame interchangeable lens camera,” per Sony, you should definitely do your own hands-on. We found it comfortable and right-hand controls readily accessible (jog dials front and back, shutter, exposure compensation dial et al).

We’ve always liked Sony’s Wi-Fi implementation and the new Alpha is no exception.

The top deck has a hot shoe atop the EVF, stereo mics, two pinhole speakers, a classic mode dial, power on/off lever, C1 (Custom) button and the exposure compensation dial. There is no built-in flash, and even with ISO of 406,900, consider a good one as an optional accessory. The .5-inch XGA OLED electronic viewfinder is a beauty, rated 2.4 million dots. It’s really bright and seems larger than it actually is. A diopter control helps you make it tack sharp. Another key feature here is a 3-inch tiling LCD screen with 1.23 million dots. It handled the direct Arizona sunshine when the Sunny Weather mode was engaged. We always prefer tilting screens for shooting at different perspectives rather than simply arms straight out.

The back is also dotted with keys including Menu, Custom 2, a second jog wheel, AE/MF-AEL lever, Function (Fn), Playback and Delete. A control wheel surrounds a center OK button. The points here give access to White Balance, Burst Mode and Display.

On the right side are the NFC tag, the SD/Memory Stick card slot and a red-dot video button. Fortunately it’s flush to the surface to prevent inadvertent movie recordings. On the left are two doors; one covers the USB and HDMI connections and the second has headphone and mic jacks, hinting at the A7S’ relevance for serious videographers.

The bottom has a tripod mount and battery compartment.

Given its pro-shooter price, the A7S is one of the few cameras supplied with two batteries. Each is rated 360 shots per CIPA so you should be good for a day’s shooting. That extra battery is worth $79 so it mitigates the $2,499 cost just a little bit. In the carton there’s also a plug-in charger, cap, strap and USB cable. Sony does not include any software CDs so you have to download PlayMemories Home and Image Data Converter for handling files as well as PlayMemories Mobile for smartphone connectivity. Also plan to purchase a new high-capacity SDXC card for capturing XAVC-S videos.

One of Sony Alpha A7S’ breakthrough features is an ISO range of 100-409,600. Yes, the top number is correct. Given that, we took the camera to a concert of jazz guitarist John Pizzarrelli. The finger work on his seven-string guitar is amazing so it was a good test for the camera. Using an f/4 24-70mm lens, we upped the shutter speed by cranking the ISO. The samples were taken at ISO 64,000 and 51,200 with a few at outer-space heights for laughs. The reason we say that is simple—images at 409,600 are absolute messes, requiring RAW shooting and dramatic noise reduction efforts. We doubt anyone but serious pros would go there. However, you can shoot JPEGs up to 80K or so—which is amazing. The only other camera that comes close is the Nikon Df, a 16.2MP $2,749 full-frame model that only shoots stills; its maximum ISO is 204,800.

Our biggest complaint is the burst mode, which is just 2.5 fps.

Pizzarrelli allowed us to shoot for two songs, and even smiled for the camera, but we could’ve snuck in a few more tunes because in Silent Shooting mode, the A7S is remarkably noise-free even in burst mode. In fact, it was a bit disconcerting, because it was so quiet, we weren’t quite sure it was working! This is a great feature for street photography, snapping during special events without disturbing guests and anywhere else clicking is unwelcome.

The A7S dropped overall resolution in order to reach those ISO heights. Is it worth it—especially with 24MP and 36MP versions available from Sony, not counting other full-frame models from Canon and Nikon? Yes. We always recommend purchasing the largest sensor possible, no matter if it’s a point-and-shoot or any type of interchangeable lens camera. With the larger pixels of full-frame sensors, color is more accurate with depth you simply can’t get with APS-C or smaller chips. Beyond the high-ISO concert shots, we also took many in our Southwest stomping grounds.

The images were quite good, with the accuracy and detail one expects from full-frame cameras — even if the megapixel count is “low,” at 12.2. We had few issues enlarging them 50 to 75 percent on a 27-inch monitor (see samples). The A7S also focuses quite quickly, and we never had problems hunting and grabbing. Our biggest complaint is the burst mode, which is just 2.5 fps—the camera just doesn’t have the processing power of full-frame DSLRs which, of course, are much larger and heavier. We wouldn’t suggest this one for sideline action shots. If you’re recording movies, that’s another story all together.

The A7S got a major boost in video quality. From the AVCHD 1080/60p at 28 Mbps of the A7/A7R, now with XAVC-S you can capture 1080/60p at 50 Mbps for much smoother and natural-looking movies. We first used this new codec on the RX100 Mark III and were quite impressed. Any casual video shooter will be thrilled with them. We used it while riding on a lake and captured some very fluid clips. But this is just the beginning. For pro videographers or very serious enthusiasts, the A7S records uncompressed 4K video (3840 x 2160 pixels, 16:9 format) but an external recorder is required, which must be linked via HDMI. Unfortunately, we’re not set up for 4K so we can’t comment on the quality. The A7S has the adjustments and tweaks pros desire, including time code/user bit settings, zebra stripes, focus peaking and so on. Plus it has all the manual adjustments of the A7S itself.

We already mentioned ISO capability in the real world. With our classic test subject, there was no digital noise until ISO 3,200 then it subtly increased to the 10,000 setting. It became much more noticeable at 20,000. For JPEGs, we’d stick to 64,000 or 80,000 at the most. After that point, color shifts and heavy speckles were the order of the day. The A7S will hit that 409,600 headline number, but it’s doubtful anyone would be satisfied with the output. Still you can reasonably shoot at 51,200 at f/4 with a high shutter speed, making the camera a winner for low-light photography.

The A7S has Wi-Fi and NFC capability for pairing with a smartphone via the PlayMemories Mobile app (iOS/Android), which is simple. Go into the camera’s Wi-Fi menu system, select Send To Smartphone, run the phone app, input the password from the A7S and you’re good to go. We’ve always liked Sony’s Wi-Fi implementation and the new Alpha is no exception.

The Sony Alpha A7S can do some remarkable things. It takes very good stills with its 12.2MP full-frame sensor. Wedding and event photographers should jump on it thanks to its quick response, along with outstanding image and movie quality. But if 4K video and a super-high ISO capability are not high on your must-have list, you’re much better off with the 24.3MP A7. Don’t get as wrong, as we certainly liked using the A7S, but it’s overkill for the vast majority of shutterbugs.