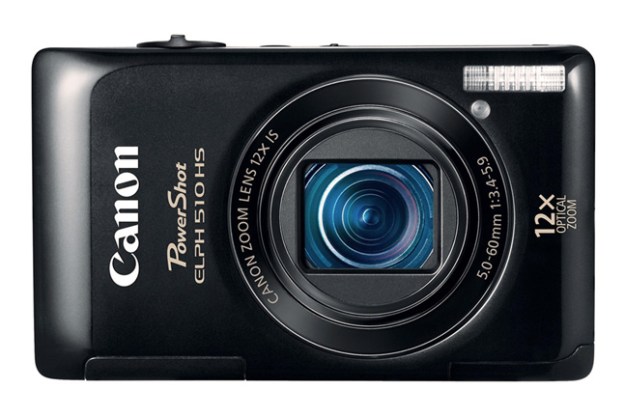 “The Canon PowerShot 510 HS is a solid 12MP camera with a very useful 12x zoom. Image quality is very good and the movies are more than satisfactory.”

One of Canon’s newest digicams features a 12.1MP CMOS sensor, a potent wide-angle 12x zoom, and of course, high-def video capability. Yet its signature feature is a 3.2-inch touchscreen LCD monitor and interface. Now we’ll see if “cool” taps and swipes are worth the extra money.

Canon’s ELPH digital cameras have sleek and easily-recognized designs. Available in red, silver or black, the 3.8 x 2.3 x .86 digicam looks good with soft, rounded edges and it easily fits in a pocket; making it great for vacations or simply carrying it at all times. The 510 HS weighs in at just 7.3 ounces. There’s a bit too much text on the front for our taste, but check out the photos, as it may be fine for you. (Our review sample was a deep red and we liked it.)

The tour of the 510 HS will be a quick one as it probably has the fewest buttons and dials we’ve recently encountered on a fully-featured digicam. On the front is a 12x optical zoom with a range of 28-336mm, a great figure for such a slim camera. Canon also has a 14x compact zoom tucked into its 12MP $329 SX230 HS but that one doesn’t have a touchscreen and is just a tad thicker. Also on the front of the 510 HS is an AF Assist lamp and flash.

On the top deck are two pinhole mics for stereo recording, a tiny mode switch, on/off key and shutter button surrounded by the zoom toggle. There’s also a three-pinhole mono speaker. The mode switch has only two options—Smart Auto and Camera. Since the only other button on the camera is Playback on the lower right of the back, everything—and we mean everything—is adjusted via the touchscreen.

The screen measures 3.2-inches (diagonal) and is rated a solid 461K pixels. We had no issues outside in sunshine or indoors in dim light. When you’re in photo mode, two series of icons flank the basically square, center image you’re capturing. Depending on the setting, the options at your fingertips or the supplied stylus will vary. In Smart Auto you tap Function on the lower left to change things like aspect ratio, resolution (still/movie). On the right are a red-dot video control, flash adjustment, touch shutter on/off and Display. With Display you change the number of icons appearing on the screen. The camera has grid lines but you have to delve into setup to engage it.

Move out of Smart auto and you have access to Program, a variety of scene modes and art filters. You can swipe though four screens with six options on each. Tap the one you want are you’re good to go. The Scene modes are fairly standard (Portrait, Kids&Pets, Foliage and so on). Of note is iFrame Movie for transferring content to Apple devices, High-Speed Burst (7.8 fps at 3MP), Handheld Night Scene as well as Fish-Eye, Miniature and Toy Camera effect filters. In Program you can also adjust ISO, white balance and several other parameters but this baby is really point-and-shoot so forget aperture- and shutter-priority. If that’s important, check out the SX230 HS but kiss the taps and swipes goodbye.

On the right side is a compartment with USB and mini HDMI outs along with a wrist strap anchor. The left is clean. On the bottom are compartments for a very small lithium-ion rechargeable battery, memory card slot and tripod mount. The battery is rated only 170 shots per CIPA so a spare is really a must. The ELPH accepts all types of SD cards as well as Eye-Fi.

You’ll get the camera body, wrist strap with integral small stylus, battery (which looks like a sophisticated AA), USB cable and a 36-page Getting Started booklet. The supplied CD-ROM (ver. 93), has the full manual and software guide along with Canon’s software for handling files (Windows/Mac).

Since the PowerShot 510 HS has a 12.1-megapixel CMOS imager, maximum still resolution is 4000×3000 pixels while video is 1920×1080 at 24 frames per second using the MOV format. For the record, several new cameras offer 1080/60p so this camera is hardly state-of-the-art. You may not need it as we were pretty happy viewing the Canon’s clips on a 50-inch plasma.

We had the PowerShot ELPH 510 HS with us over the course of several weeks. As noted, this is a very compact camera so carrying it around was barely a chore. It’s nice having a 12x zoom in such a small digicam—just slightly thicker than a basic aim-and-forget camera. We had it with us at a family wedding and it was fun grabbing a wide shot of the bridal party, then zooming in on the happy bride and groom. The 510 HS has a good opening wide angle of 28mm but our preference is to 26mm or 24mm.

DigitalTrends.com readers know we’ve been fans of Canon point-and-shoots for many years as most deliver very good picture quality with rich colors and that nice Canon pop. The 510 HS is in the same camp as we were very happy with the overall results. One of the reasons for the superior images is the fact it has optical image stabilization to help remove the shakes from your shots. We took some close-ups of the bride and groom walking down the aisle and the photos—for the most part—were rock solid.

Now everything isn’t wonderful with the camera. Even though it has burst modes of 3.3 (full resolution) and 7.8 (3MP) fps, when using the flash it’s one at a time. Even with the AF Assist lamp, it took the camera several seconds to grab focus in a dimly lit ballroom. The results of these flash shots were quite good but it’s really best for static situations such as groups of smiling faces staring back at you. Trying to get good images of fast dancers in low light was a bust.

The HS in the camera’s name stands for High Sensitivity and Canon promotes the fact you can take quality shots in low light thanks to the CMOS sensor and DIGIC 4 processor. We’ll give them partial credit for that claim. Our test ISO shots held up well up to ISO 800 then started to display digital noise and color shifts at 1600 and 3200 (the maximum setting). You could probably get away with a small print or online photo at such lofty levels but if it were us, 800 would be highest we’d go. The 510 HS does have a favorite option of ours—Handheld Night Scene—that combines three images in low light for less noise and better overall color. You should definitely use this. In keeping with an overall trend, the camera has several art filters (Toy Camera, Miniature and so on). They weren’t nearly as impressive as Olympus’ Dramatic Tone but they’re fun nonetheless.

Video quality is impressive, given the slower frame rate than the competition. You can zoom the entire focal length and the sound is also good, given just two pinhole mics. The clips held up nicely on a 50-inch screen—and you can’t ask for more than that from a $349 camera.

As for the touchscreen interface, it’s not as sensitive as we’d like it to be. We used fingertips most of the time rather than the stylus on the wrist strap and found we had to do double taps to engage the setting we wanted. Swiping through screens and menus was a bit more accurate but let’s put it this way—Canon still has a long way to go to reach iPad interface levels. It’s not awful–we just wanted it to be better.

Another negative is the small battery. Rated at 170 shots by CIPA, we hit that figure even after using the flash often and playing back videos. If you buy this camera, a spare would be must, especially if you’re out in the wild with nary an outlet to be found.

The Canon PowerShot 510 HS is a solid 12MP camera with a very useful 12x zoom. Image quality is very good and the movies are more than satisfactory. Optical Image Stabilization is also a real plus. We had our issues with the touchscreen interface and would strongly recommend you try it out before purchasing—or just make sure the retailers doesn’t have a restocking fee in case it disappoints. We weren’t thrilled enough with the PowerShot 510 HS to bestow an Editor’s Choice award, but it remains a solid point-and-shoot worthy of our recommendation.

How to use smart lights to up your photography skills