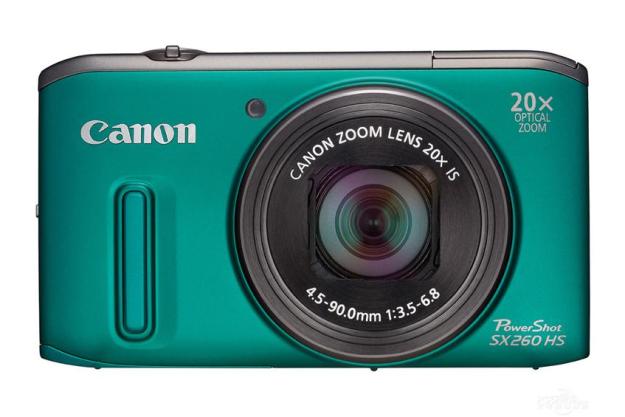 “The SX260 HS fills a very small niche. It's a great travel cam: It's sturdy but (relatively) small, and the GPS feature is a great addition to travel photography.”

The Canon PowerShot SX260 HS wears many hats: it has built-in GPS, zooms all the way to 20x, shoots 1080p video, and it’s all crammed in a point-and-shoot body. That’s a lot of ground for one camera to cover, and it does a decent job in all areas. Unfortunately, it also suffers from what can happen when you spread yourself too thin – instead of excelling in one area, you find yourself doing OK at lots of things.

The SX260 HS is a hard sell, costing $350 for what can be considered somewhat niche features. At the same time, users will be happy with the user-friendly interface and the ease with which you can manipulate manual controls. You just have to determine how worth it a couple of stellar capabilities are to you, and whether or not they outweigh more standard fare.

The first thing you’ll notice about the SX260 HS is that its slightly bigger and considerably heavier than your average point-and-shoot. Of course, its GPS function means it’s not your average point-and-shoot, but slim seekers will probably want to steer clear of the genre altogether (for the time being at least — these things are only going to get smaller and smaller). Still, for what it is, the SX260 HS won’t strain wrists or have any issues fitting in even bags on the small side. Will you be sliding it into any pockets? No.

Aside from its heft, it’s a nice looking camera with a high-quality feel and appearance. The face plate has a small grip, but it’s mostly dominated by the big, 20x optical zoom lens. Long zoom lenses sometimes feel generally loose, with too much wiggle room between the chassis and lens. It’s a trap for dust and dirt and can result in lens scratches or even constantly blurred photos. Luckily, you won’t have to worry about that with this model: The lens is completely protected and connected to the body.

The back of the camera is dominated by its 3-inch LCD display. As we mentioned, it’s a bigger-bodied unit, so that means the controls aren’t crowded off to the side. The SX260 HS has a dual-mode dial interface. One you can rotate to determine settings like Manual, Program, Live, Auto, etc. Unfortunately, this thing is a little too sturdy — rotating it required two fingers for us, and it has a tendency to stick. The other dial is your traditional point-and-shoot mechanism to move within the in-screen camera UI. It also has the flash, macro, exposure, and timer controls, as well as the middle function-set button. Display, menu, and playback each have their respective controls, and the SX260 HS also features a dedicated video capture button. Up top is reserved for the power button as well as zoom toggle and shutter. There a pop-up flash as well.

Nothing screams slick about this camera, but it’s sturdy and intuitive with obvious and easy-to-reach controls and a high-quality look and feel. What it lacks in flash it makes up for with consistency.

If you’ve ever used a Canon point-and-shoot, then you know what you’re getting yourself into: Incredibly easy to master in-camera controls and an intuitive interface. The SX260 HS has more shooting options than many point-and-shoots, with Manual, Aperture priority, and Shutter priority among them. You can of course defer to Auto to have over all control, or use Program or a handful of the various other settings to turn some of the work over to the camera.

You’ll spend most of your time rotating the main dial to determine setting and the other to move within them. You can, of course, explore more of what this mechanism can do, but for the most part you’ll spending time scrolling through the left-hand side of the camera screen.

The SX260 HS obviously gets its bragging rights from its GPS feature and 20x optical zoom. But let’s go over a few of the other feature upgrades from the PowerShot SX230 HS. For starters, the SX260 HS has the DIGIC 5 processor, a big step up that translates to faster overall use and quicker processing. To offer a tangible example, time between shots has been an area of improvement.

But getting back to what really matters: the GPS and 20x zoom. The GPS feature is no frills: It keeps track of the location of your photos and you can enable a logging function to track your movement from place to place. As you might imagine, this will kill your battery life. There is no landmark function, so don’t expect to be able to tag pictures at the Golden Gate Bridge. What you’ll get is the latitude, longitude, and elevation of your shots.

Another notable, interesting feature is playback mode, of which there are several. You can choose a shuffle tool, which shows you seemingly random of photos similar to the one you just looked at. There’s also a mode called Movie Digest that plays back the events of the day in a cinematic setting.

The 20x optical zoom is sharp and quick. And Canon was able to package it in a relatively small package (most other cameras in the same genre are bigger and heavier than the SX260 HS).

It should be clear by now that this camera is easy to use. Canon has a reputation for creating clear, intuitive physical and in-camera user interfaces and the manufacturer has only done this better and better. The SX260 HS is no exception, and the setting options are many and the manual ones easy to manipulate. It’s a great device for learning more about manual settings for beginners, but provides plenty of presets and auto functions for you to rely on.

As we mentioned earlier, the main mode dial is something of a sticking point for us — literally. It’s surprisingly hard to turn the thing, and with a point-and-shoot, everything should be made for fast. It’s not called a point-and-shoot for nothing. It’s a small drawback but an obnoxious one.

The camera’s size is not one of its inconveniences. Much ado is made about how small we can make these things and how discreet we can keep them. The SX260 HS isn’t breaking any barriers with its build, but it has a nice feel without weighing you down. While image quality was above average for a point-and-shoot of this price and genre, it isn’t perfect. Images are on the warm and oversaturated side, and you won’t be able to push the camera above ISO 600 (and even then, it can be iffy). Low-light capture, as with most Canon point-and-shoots, is nothing to brag about (you’ll find yourself relying on flash in that situation — and it should be noted that the pop-up flash is nice to have). Autofocus was difficult to manage in low light, but in general the focus-to-shutter process felt fast enough. It might not win in a speed test, but it’s quick enough that it will go unnoticed by nearly all users.

Clarity at 100-percent zoom was impressive. Images were clean and sharp – little to no noise or fuzz in the photos.

The SX260 HS shoots full HD video at 24fps with stereo sound, which is a nice feature, but likely something you won’t find yourself relying on. What really boosts the appeal is that the 20x zoom is fully operational during recording. While we found it a bit choppy, it didn’t take away from the process or result. Since you probably aren’t filming any movies with this camera, we’d say having full HD video capture with some creative filters and 20x optical zoom is sort of a disguised yet pleasant surprise

Battery life is great – if you’re not fully using the GPS feature that is. Then, of course, it drains it quite quickly. You can toggle it on and off as you go, but that’s a lot of button mashing, and you’re likely to just let the SX260 HS die.

Conclusion: Should you buy it?

The SX260 HS fills a very small niche. Yes, it’s a point-and-shoot, but its $350 price tag means that the extras you’re paying for have to be specifically worth it to the buyer. It’s a great travel cam: It’s sturdy but (relatively) small, and the GPS feature is a great addition to travel photography.

The 20x zoom is a pretty compelling sell as well, especially given the fact that it’s in such a small, convenient package compared to other superzooms out there. But if you don’t care about mapping your photos (we realize to some buyers this is just more useless metadata) or need a super-capable zoom, then you’re probably better off spending money on a camera that has higher image quality and fewer frills – the S100, for instance.

If you do need these two relatively niche feature bundled together, then the SX260 HS is a great option. We would also recommend taking a look at the device if you’re in the market for a superzoom but don’t need something as professional as the $500+ models out there.

Netflix sheds light on its ‘approved cameras’ for filmmakers
Insta360’s next camera could be amazing for lowlight photography
The Insta360 Sphere is a virtual invisibility cloak for drones
Insta360 is about to reveal … exactly what?
DJI’s new Matrice 30 drone is a mean machine for specialists
How to clean up and organize your photos
This MagSafe iPhone rig aims to give your videos a more pro look
Nikon’s new 800mm lens for Z-mount cameras lightens the load
ReelSteady makes GoPro Player ‘reel’ useful for filmmakers
GoPro takes to the skies with the Hero10 Black Bones
How to turn off the camera sound on an iPhone
24 amazing images of our planet for Earth Day
Instagram test lets you pin particular posts to your profile