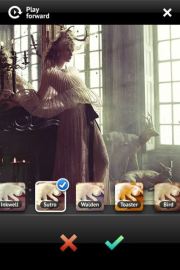 We all know 2012 was a big year for Instagram and Internet GIFs, so it was only natural that Gifstory would eventually appear in the App Store. The newly launched startup aims to combine the allure of photo filters onto animated pictures, all while allowing you to garner a band of followers to Like and comment as they please.

Until now, GIFs have generally been used in Web forums, Tumblrs, and comment sections to go where words cannot (Tumblr blog WhatShouldWeCallMe being the prime example of this discovery). These GIFs also derive from existing videos, such as clips from movies and TV shows or a snippet from a music video. With Gifstory, users can record their own mini movies without the pain of manually cutting and creating their own stop-motion attempts, then apply vintage filters for a touch of hipster. Because everyone knows there’s no point in GIFs of kittens cuddling in a basket if it doesn’t come in Sutro.

Gifstory is currently in private mode, so if you want to jump on being the first to receive updates, sign up to the site’s mail listing here. The app is currently slated for iOS, with an official launch date some time in February. If you can’t wait that long, however, you can still make your own filter-less GIFs with iOS’s Cinemagram.