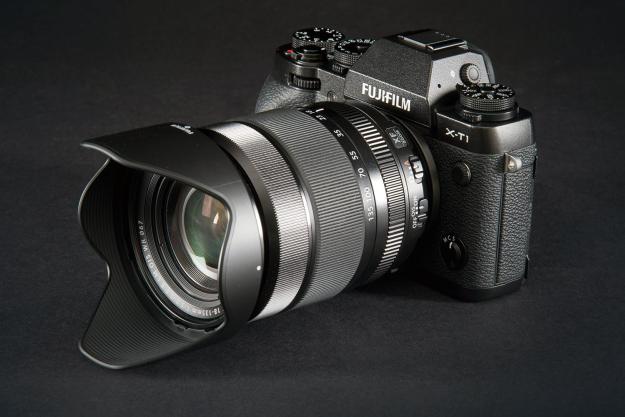 “The Fujifilm X-T1 is so good that we’d put it side-by-side with a full-frame camera.”

The Fujifilm X-T1 is so good that we’d put it side-by-side with a full-frame camera.

The X-T1 ($1,300, body only) is one of the latest models in Fujifilm’s highly regarded lineup of X-series mirrorless interchangeable lens cameras. It isn’t radically different than earlier editions such as the X-E2, yet it has some neat tweaks and improvements, including a DSLR-like body style, that might make it worth the splurge.

The 16-megapixel X-T1, with its APS-C sensor, has a retro rangefinder-like styling that fits neatly alongside other Fujifilm X-series cameras, yet it clearly has a form-factor that’s more like a DSLR. The all-black edition looks slick, and with the $899 18-135mm f/3.5-5.6 optically stabilized, weather-resistant lens attached–and with its many multilevel dials – it looks like a serious camera for well-heeled shutterbugs. (Fujifilm also recently announced a higher-priced, limited edition called the Graphite Silver.)

One highlight is that it’s weather-resistant and dust- and cold-proof.

One of the X-T1’s highlight features is that it’s weather-resistant and dust- and cold-proof. This came in handy during our review period when a glass of water splashed on the camera while sitting on a table during a wedding – the camera didn’t skip a beat. Same held true as we got splashed near a water sculpture. Not that you can submerge it in a lake and shoot underwater, but if a downpour hits, you should be O.K. Just make sure you have a WR/weather-resistant lens like the one supplied for our review if rainy days are on the horizon.

The key feature on the front is the Fujifilm X-mount. Currently there is only one weather-resistant lens available but a 50-140mm f/2.8 zoom is planned for late 2014 arrival and a 16-55mm f/2.8 is due in 2015. Even though there’s just a solitary WR lens, it has a good 35mm equivalent range of 27-202mm. If getting wet isn’t an issue, there are about a dozen primes and zooms available for the X-mount from Fujifilm, Rokinon, Zeiss, and Samyang covering most common focal lengths.

Also on the front is a Function 1 button, command dial, AF Assist/self-timer lamp, a covered flash sync terminal, and a lever to select focus mode (single, burst, manual). There’s also a fairly substantial grip that we found comfortable, but you need to do your own hands-on, especially since our review configuration costs north of $2,000. The body is covered with a textured finish that helped keeps things steady.

The top deck is another point of differentiation with other boxy X-series models. There are three dials instead of two, making it much more accommodating for photographers who love adjusting image parameters. There’s one for ISO with a range of 100-51,200. Beneath this locking dial is a lever for engaging bracketing, burst speed, multiple exposure mode, filters, and panorama shooting. To the right of the viewfinder is a locking shutter-speed dial (bulb-to-1/4,000th of a second); beneath this is a lever to adjust metering type. The final dial is for exposure compensation (+/-3 EV). You won’t find the classic mode dial that’s typical for 99 percent of the cameras out there; we’ll delve more deeply into this in the Performance section. Other items on the top are a diopter control, stereo mics, power on/off and shutter, a red-dot movie button, along with another customizable Function button that has Wi-Fi options as the default.

To fit all these buttons and dials, something had to give and in the case of the X-T1 it’s the built-in flash. There’s a hot shoe on the electronic viewfinder (EVF) and Fujifilm supplies the EF-X8 flash unit that slides neatly into position. We left the flash on all the time and this outfit looked as sophisticated as can be. The camera itself measures 5 x 3.5 x 1.8 inches and weighs 15.4 ounces (with battery and card). Add the 18-135mm zoom and the flash, and you have a substantial piece of hardware around your neck.

The back has a tilting 3-inch LCD monitor, rated 1.04 million dots. This display is a good one, working well in the bright Arizona sunshine of our test bed. Complementing the LCD is a terrific 0.5-inch, 2.36-million-dot OLED EVF, and there are a variety of views with different framing options. It’s not a stellar innovation, but some users may like having the option. What is more critical is the eye sensor that switches automatically from the LCD to the EVF and vice versa for seamless shooting. Both the LCD and EVF were taken from the X-E2, however differences being the adjustable tilt and the EVF framing options.

The rest of the back has the usual assortment of buttons, another jog wheel, and a four-way controller with center Menu/OK key. There’s a substantial thumb rest on the right, also with a textured finish. On the right side is the SD card slot, while the left has mic, HDMI, and USB connections. The camera accepts SDXC UHS-II media and we suggest you use a high-capacity, high-speed card with this camera.

The battery is good for 350 shots (per the CIPA standard) – is a competitive number for mirrorless cameras.

You’ll find the body, various caps and covers, a strap, the flash, battery, and charger with AC cord. Fujifilm supplies a 132-page printer owner’s manual and a CD. The disc has MyFinePix Studio ver. 4.2b for Windows and RAW File Converter (Win/Mac). There’s also a PDF with the Owner’s Manual that’s just a few pages more than the printed version.

We used the X-T1 with the 18-135mm zoom over the course of several weeks. Although there may be some points of difference between X-Series models, the best ones feature the 16MP APS-C X Trans CMOS II sensor and EXR Processor II as the main components of the imaging engine, as well as the Hybrid Auto Focus system. We’ve been big fans of this trio and weren’t disappointed with the 4,896 x 3,264-pixel images captured by the X-T1 (see samples). The camera does a really fine job overall and excels over the competition for portraits and skin tones. The results were superb and this was just shooting compressed JPEG Fine images in many instances.

This X-T1 is crammed with features and there’s definitely a learning curve to really make the most of it.

This X-T1 is crammed with features and there’s definitely a learning curve to really make the most of it. Many photographers will revel in its old-school configuration. We mentioned earlier there’s no classic mode dial. With the X-T1 there’s just Program Auto Exposure, aperture/shutter priority, and manual – just like very high-end DSLRs such as the Nikon D810. By adjusting switches and dials on the X-T1’s lens and body, photo parameters are changed to your liking. And with three huge dials on the top deck, making these adjustments is a blast from the past.

Of course, internally this mirrorless interchangeable lens camera is as modern as can be. The Hybrid AF is a combination of phase and contrast detect systems. And with 49 AF points, there were very few issues grabbing sharp shots. With that said, the camera’s not perfect since the supplied flash didn’t recycle super-fast, so we missed some indoor party and wedding shots. Although the camera is rated 8 frames per second, we had trouble grabbing tack-sharp shots of fast action such as fine flowers moving in a breeze. Yet, with less frenetic subjects, the camera more than holds its own.

One difference with other X Series models is the uber-high ISO of 51,200. Like street cars with 500-plus horsepower, manufacturers love touting these big numbers. In our standard test, the top setting wasn’t horrible but there was definite color smearing and noticeable speckles. You could probably get away with using it in smaller sizes – which is pretty amazing – but you won’t love the results like those achieved at lower levels. ISO 6,400 is about as high as we’d go but that gives you plenty of options for shooting in available light with a wide-open prime.

As far as videos are concerned, it’s nice to see Fujifilm offering 1080/60p MOV-format clips. The quality isn’t nearly as smooth as the XAVC-S codec used by Sony but you’ll be happy with the results. We shot some flags waving in the winds among other scenes and colors were accurate and focusing sharp. We did notice a tendency to under-expose while shooting indoors so make your adjustments ahead of time before filming once-in-a-lifetime events. And, of course, the onboard mics makes breezes sound like hurricanes but that’s typical for all cameras.

The X-T1 has built-in Wi-Fi (no NFC) to connect to your smartphone using the Fujifilm Camera Remote app (iOS/Android). It handles the basics like transferring images to the phone, browsing the photos on the camera, and geo-tagging. The system is not as elegant or refined as Samsung and Sony apps but it does the job.

What can we say? Fujifilm makes some of the finest mirrorless interchangeable lens cameras available with its X-series, even if it’s a bit pricey. We gave the X-E2 our Recommended rating, but this even more expensive model deserves an Editor’s Choice designation. The camera is not perfect, but the X-T1 and the Fujinon 18-135mm WR lens combo is so good that you can compare it side-by-side to the $1,499 full-frame Sony Alpha A7, a truly ground-breaking Compact System Camera much beloved by DT’s reviewers. While full-frame images have more depth and richness than the APS-C sensor used in the X-T1, the Fujifilm camera is still terrific overall. Just realize your selection of weather-resistant glass is pretty poor until more lenses show up, but if watery-conditions aren’t critical, by all means put this camera high on your wish list.