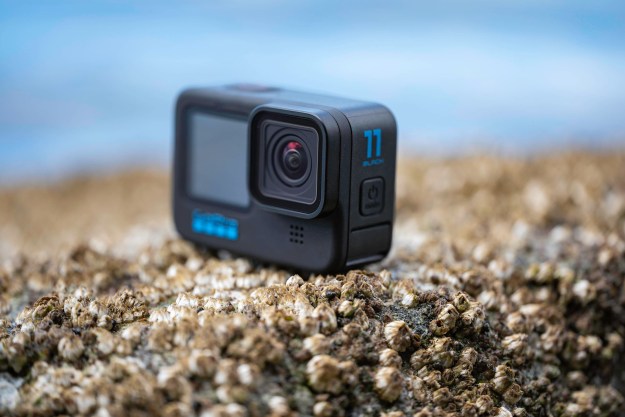 “The GoPro Hero 11 Black now has a bigger sensor and exciting new features beneath a familiar exterior.”

Falling leaves, chilly nights, pumpkin spice, and the latest GoPro camera hitting the shelves — all are seasonal hallmarks that herald the onset of autumn. The GoPro Hero 11 Black is here, and despite a familiar exterior, there’s a lot of new things to consider under the hood. I’ve been all around Southwest Washington putting this rugged action camera to the test, including zip-lining over a canyon at ZiplineX in Amboy.

With all this experience under my belt, let’s dig in and find out if the Hero 11 is the right action camera for you.

Ziplining with the GoPro Hero 11

The GoPro Hero 11 is outwardly nearly identical to the Hero 10, the only difference being a 1 replacing the 0 on the side. However, I don’t fault this design decision by GoPro — after all, why mess with a good thing? What GoPro has here works great, and honestly, I can’t think of what they could change about the exterior that would improve the camera.

Sticking with the same design is actually something of a pro-consumer move since it means current users can easily utilize existing accessories previously released for the Hero 10. The whole Creator Edition kit will work with the Hero 11, including the Volta battery grip, Media Mod, and LED light, which have become essential content-creation tools for me.

The image sensor in the GoPro Hero 11 is larger than that in the Hero 10, but only vertically. GoPro added a bit of height to the sensor, which means you can now shoot both horizontal and vertical footage simultaneously without needing to choose between the two formats. This is important for me, as this year I began integrating vertical video content creation into my repertoire. Now I can use the Hero 11 to film my longer-form YouTube videos and also grab short vertical clips to share on multiple platforms.

Another advantage of shooting in full-frame mode with the Hero 11 is that this extra height means increased flexibility when editing. I can essentially adjust my camera angle after the fact or create panning shots in post-processing while maintaining a sharp, high-resolution image. Speaking of post-processing, the Hero 11 can now shoot 10-bit color that delivers even greater latitude for pulling detail out of crushed shadows and blown-out highlights. A further improvement to video quality is that the Hero 11 can now shoot at up to a 120Mbps bit rate, while the Hero 10 maxes out at 100Mbps. The Hero 11 can record 5.3K video at up to 60fps, 4K at up to 120 frames per second (fps), and 2.7K at up to 240fps for super slow-motion.

Exploring with the GoPro Hero 11 Black

Also new in the GoPro Hero 11 is Hyperview mode, which drastically increases the field of view compared to Superview mode in the Hero 10. It’s not quite a replacement for the Max Lens Mod, but it does offer a much wider angle than was ever previously native to Hero Black cameras.

Hypersmooth 5.0 provides a noticeable improvement over the stabilization in the Hero 10.

In terms of still photos, the larger 27-megapixel sensor is certainly a boon to photographers, particularly if you’re fond of square photos, but it also enables extra flexibility when editing to crop down to different aspect ratios for varying compositions. Personally, I almost never take still photos with action cameras, but if you’re on an adventure, sometimes you’ll want to grab a single shot, and if the only camera on you is a GoPro, then it’ll do a pretty good job. It can even do burst shooting of RAW format images for up to 10 seconds.

Last but certainly not least, the Hero 11 now features new long-exposure night modes, including star trails, light painting, and vehicle light trails. I love astrophotography and was super impressed by the quality of the star trail videos I was able to capture. Each star trail video ate up an entire battery for 8 to 10 seconds of footage, but it was totally worth it. Also, if you get the Volta battery grip, you’ll be able to shoot more and longer star trail videos. The results are just gorgeous and can boost the production value of almost any video.

Between the larger sensor, upgraded stabilization, and new shooting capabilities, the Hero 11 is a major upgrade over the Hero 10. The footage has a remarkably true-to-life quality that I feel really immerses the viewer in the experience.

The Hero 11 features the same front and back screens as the Hero 10, and that’s just fine in my book. They’re easily visible in bright sunlight and provide an accurate preview, with good colors and contrast.

The Hero 11 never gave me any reason not to trust it to capture key video footage in the moment. It’s very reliable, and I never noticed any serious overheating. It did get warm after longer recording sessions, but that’s true of every camera I’ve ever used, excluding perhaps the Nikon Z9.

The touchscreen interface is my favorite of any action camera system. Customizable presets make it easy to swap between settings on the fly, and I was able to make changes even while swaying on top of a 100-foot pole while waiting my turn for the zip line. You can definitely tell that GoPro has been refining this system for the past 20 years.

New to the Hero 11 is the option to switch between easy and pro modes. Easy is great if all you want to do is capture great videos without having to think about manual settings of any kind. Pro offers a lot of extra customization and is the mode I gravitate toward.

The camera is extremely durable, as expected, and is waterproof down to 33 feet.

The Hero 11 now ships with GoPro’s Enduro battery, which extends battery life by as much as 38%. It also improves battery life in cold weather and is rated down to 14-degrees Fahrenheit. The camera itself also now includes an extended battery mode that reduces energy consumption at the cost of image quality. Even while shooting in maximum image quality mode, I was able record all the exciting moments in a zip-lining tour and still have 28% battery left at the end.

GoPro has developed one of the most compelling apps around, with camera control and video-editing tools built in, and it offers a $100-per-year premium subscription service that’s actually worth the money. Benefits of subscribing include unlimited cloud storage, guaranteed replacement of damaged cameras, discounts on cameras and accessories, and the ability to stream to GoPro’s premium livestreaming service.

New with the Hero 11 are auto-upload and automatically generated highlight videos, as well as cloud-based editing. While these features weren’t available prior to launch for me to test, they have a lot of potential. The way it’s meant to work is that whenever you plug your Hero 11 in for charging, it will automatically upload all of your new footage to the cloud, where an AI program will then create a video out of that footage for you automatically. You’ll then be able to edit that video in the cloud or edit one on your own without AI assistance and then share it.

In theory, this could drastically improve my workflow, though since I only have a slow DSL connection at home, it would be difficult for me to take full advantage of this innovative system that GoPro has created. Regardless, if you’re buying a new GoPro, the subscription is almost mandatory. Considering the $100 discount you get off the camera with the subscription, it pays for itself.

The Hero 11 is available now and retails for $500, though if you take advantage of GoPro’s premium subscription plan, it knocks the price down to $400. The Creator edition will set you back $700, or $580 with the subscription.

You’re definitely paying a premium for the GoPro Hero 11, though the subscription adds a lot of value. And if you’re willing to wait, the Hero 11 Black Mini will be available October 25 for $400, or $300 with a subscription. That’s going to be a very different camera in a lot of ways, but it does include most of the capabilities of the full-size Hero 11 Black for $100 less.

The product of decades of painstaking refinement

Very few companies have spent so long developing one product as GoPro has, and it really shows in just how polished the Hero 11 Black is. Like the Hero 10 before it, this is a camera I can throw in my bag wherever I’m headed and be confident in its performance. Between its larger sensor, upgraded stabilization, and other improvements across the board, the Hero 11 is a worthy new entry in a venerable action camera lineage.