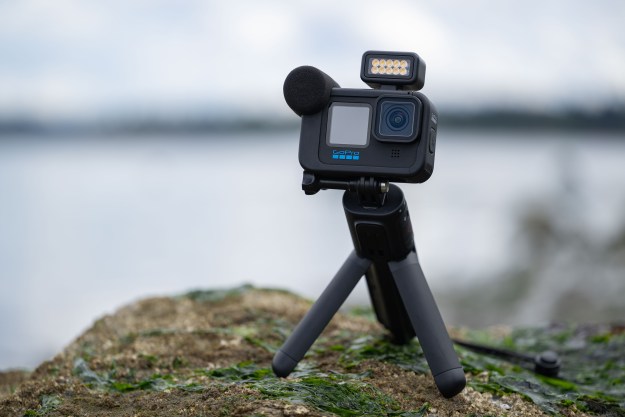 When I reviewed the Hero 10 Black last fall, I had barely any complaints worth mentioning besides the somewhat lackluster battery life. Now, with the GoPro Hero 10 Black Creator Edition, I can’t even nitpick that minor fault. The Creator Edition compiles GoPro’s best accessories, new and old, into one convenient package that transforms the competent base model camera into a content creation machine.

Fully assembled, you might well mistake the Creator Edition for a brand new camera, and considering the upgraded capabilities of this bundle, it might as well be. Snapping the Hero 10 Black into the Media Mod gives you an upgraded microphone and two cold shoe mounting points, perfect for the included LED light which comes with a diffuser for different lighting effects. Last, but not least, is the Volta battery grip, which adds hours of battery life to the Hero 10 Black, as well as external controls, and has fold-out tripod legs.

Camera: The Hero 10 is still amazing

I’m only going to touch very lightly on the performance of the GoPro Hero 10 Black, as the Creator Edition has the same photo and video specs as the base Hero 10. Suffice it to say that you can look forward to the same top-notch image quality and Hypersmooth 4.0 stabilization. The camera really didn’t need to be improved, and I’m just as enthusiastic about the quality of the footage I’ve captured with the Creator Edition as the basic Hero 10 Black. For more details, check out my review.

Media Mod: The sound of adventure

The base model Hero 10 has a decent microphone built in, but the external microphone that comes with the Creator Edition is a huge improvement. I wouldn’t put it on a par with my RODE shotgun mic, but the audio it delivers is still extremely good. I like the way it offers good, clear voice recording, and it does a fine job of capturing ambient sounds. The microphone does a great job of recording high quality audio that also sounds authentic. It’s ideal for recording in dynamic, high intensity situations where you can’t worry about fiddling with audio settings.

The LED Light Mod may seem like a tiny little thing, but it’s actually surprisingly bright, and it’s a major upgrade that’s useful in a lot of scenarios. The obvious situation is if you’re filming in low light or at night, conditions where most action cameras struggle. Another scenario is if you’re recording a backlit subject, in which case the LED light can help chase away some of those harsh shadows. The light needs to be charged separately, and is controlled via its own power button. Press and hold to turn it on or off, short press to adjust the brightness of the light.

One of my few gripes with the Hero 10 Black at launch was its short battery life, something GoPro has been working hard to fix. The Volta is the culmination of that pursuit of better battery life. It’s essentially a selfie stick/tripod with a large battery pack at its core and a set of controls that allow you to power the Hero 10 on or off, stop or start recording, and cycle shooting modes. The Volta connects to the Hero 10 via a coiled USB-C cable. A standard battery remains in the Hero 10, and is charged from the Volta.

The Volta offers a full 4 hours of 4K 30fps video shooting when combined with the built-in camera battery. Shooting extensively with the Creator Edition, I found this to equal many days of shooting, since I rarely record more than a few minutes of video at a time. I would feel comfortable taking the Creator Edition with the Volta on a week-long trip, with the knowledge that I might not have the chance to recharge it. Of course, your mileage may vary.

A caveat here is that the Volta connection to the GoPro through the Media Mod is flawed in a major way, since while the Volta does power the Hero 10 through the Media Mod, it does not send control signals through this connection. As a result, it’s necessary to connect the Volta to the Hero 10 via Bluetooth when also using the Media Mod. It’s easy enough to do, but it is an unfortunate extra hassle. I’m not sure what the issue is with the control passthrough, though it’s something I would hope might be fixed in a future update. I also occasionally experienced a bug where the camera would freeze up while connected to Volta, and I would need to take the whole kit apart and remove and replace the battery in the GoPro before it would turn on again.

When the Volta is connected to the GoPro so that its built-in controls are operable, the combination is highly compelling. It makes it really easy to record photos and video without having to reach up and touch the camera itself. I also love that the Volta grip transforms into a tripod with such ease and that it includes a pop-out mounting bracket so you can attach the Creator Edition to a backpack or other object. Also, the rotating point at which the Volta attaches to the camera clicks into places, thus allowing it to be both adjustable and capable of holding the GoPro fixed securely facing a particular direction.

First of all, with the whole kit assembled, the Volta battery grip is only waterproof when connected to the Hero 10 through an included replacement door for the battery compartment. This means that you can use Hero 10 with the Media Mod or the Volta and have it be waterproof, but not with both.

This is a real shame, though not a dealbreaker, and I wish GoPro had figured out a way to make the Creator Edition at least weather-resistant when fully assembled. The waterproofing issue is particularly frustrating, as it severely hampers what is otherwise an incredible kit. It also seems like it would have been a simple matter to design an adapter that would offer some degree of weather resistance, or at the very least include a rubber cap for the USB-C cable on the Volta so that it could be used wirelessly and remain waterproof.

The Creator Edition lives up to GoPro’s reputation for durability. As long as water is not involved, this thing can take a hit.

With the elephant in the room out of the way, I’m happy to report that the Creator Edition lives up to GoPro’s reputation for durability. As long as water is not involved, this thing can take a hit. I found this out first hand while testing, as while hiking cross-country through the depths of the temperate rainforest. The Creator Edition took a real tumble from where it was stowed on my pack. After several minutes of digging through the detritus of the forest floor, one of my hiking companions eventually located it by the glowing red indicator light. The camera came out of the ordeal in perfect working order, save for a couple of superficial scratches on the Volta grip.

Going back to the issue of waterproofing, I wouldn’t be too worried so long as you don’t expose the fully assembled Creator Edition to serious amounts of water. The time I dropped it the forest was fairly damp, and another time I was shooting a vlog when it started to rain. Neither time did there appear to be any effects from such moisture. Your mileage may vary, but I don’t think the lack of waterproofing is as serious a worry as it initially appeared.

On its own, the Hero 10 Black Creator Edition will set you back $835. However, GoPro offers a big discount for GoPro subscribers. That subscription costs $50 per year, making the actual cost of the Creator Edition $532 for a total of $582 once you factor in the subscription. The other benefits of that subscription are nothing to be sneezed at and include such perks as unlimited cloud backups, no-questions-asked camera replacement, and further member-exclusive discounts.

The upshot is that combined with a year-long GoPro subscription, the Hero 10 Black Creator edition is a fantastic value for money.

The GoPro Hero 10 Black Creator Edition is an impressive tool for content creators and has a wide range of potential applications. I love being able to just pick it up and record a vlog and know I’ll be capturing great audio and usable footage in just about any situation. There are a couple of major flaws that center around the connection between the Volta grip and the Media Mod, but they aren’t dealbreakers.

Perhaps the best thing about the Creator Edition is that if you take advantage of GoPro’s subscription discount, it’s an amazing value for money. There really isn’t anything at this price point that can do everything that the Creator Edition can. It really feels like a culmination of all of GoPro’s innovative product development these past several years.

The DJI Action 2 and DJI Mic make for fearsome competition for the Creator Edition. The Action 2 rivals the Hero 10 in terms of video capture capabilities, and the DJI Mic is a wireless microphone system that plugs into the Action 2 and offers better audio quality than the Media Mod. However, DJI doesn’t offer an easy lighting solution like the Creator Edition, and it suffers from similar waterproofing issues. Also, you can’t yet buy the Action 2 and DJI Mic in a convenient bundle at a discount, and bought separately they make for a pricey combo.

GoPros are known to be extremely rugged, and all of the accessories in the Creator Edition are similarly durable. The waterproofing issue makes it prone to damage in that regard, but as long as you’re careful about keeping it out of the drink, it should hold up to long, hard use.

GoPro releases a new Hero camera just about every year, so it’s not unreasonable to assume that there’ll be a Hero 11 this fall, but if you want to upgrade, there’s a good chance all the accessories in the Creator Edition will be compatible with new GoPro cameras. Only the Media Mod might not work with future Hero cameras if they decide to make a radical design change. The Volta and LED light, however, aren’t dependent on the shape of the camera itself. Furthermore, the Hero 10 is capable enough that I’m confident it will be a relevant filmmaking tool for years to come.