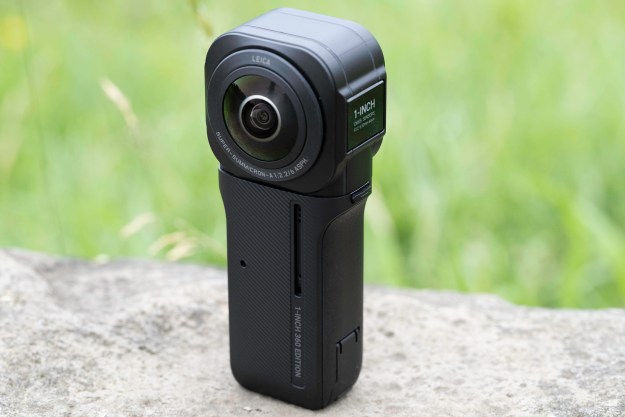 Over the past year, I’ve been introduced to the world of 360 photography via Insta360’s many and varied new cameras. Shooting photos and videos in 360 has opened up a wealth of new creative opportunities by capturing everything around me, enabling endless possibilities via the magic of post-production. However, in my experience, the one thing that has been holding these cameras back at the consumer level has been image quality. Resolution, low light capability, and dynamic range have been limiting factors in the cameras I’ve tested — until now.

The Insta360 One RS 1-Inch 360 Edition aims to solve all the problems for which I’ve long critiqued such cameras. As the name implies, the 1-inch 360 camera has a 1-inch sensor, or more accurately, two 1-inch cameras that each capture one hemispherical view. But that’s beside the point. All you need to know is that the 1-inch 360 Edition is one of the most impressive cameras in its class.

The 1-inch 360 Edition comes pre-assembled with the battery and One RS core contained within a bracket, on top of which the 1-inch 360 camera itself is clipped. Ergonomically, it’s comfortable and convenient to hold, and the controls will instantly be familiar to anyone using the One RS system. Even if not, it’s very straightforward, with simple touchscreen controls alongside a power and record button.

A sealed power port is located near the bottom of the camera, and there’s a screw mount on the base where you can mount it to a tripod or a selfie stick. The 1-inch 360 is compatible with Insta360’s invisible selfie stick, which works as advertised and is very high quality. The power port is USB-C and can also be used to transfer data or plug in an external microphone. If the microphone is small enough, it will even be invisible to the camera.

While the 1-inch 360 edition is larger than Insta360s other cameras, the form factor is actually really nice. I didn’t find it to be too big or heavy.

While I’ve grown to be a fan of 360 cameras over the past year for the incredible flexibility and creative potential, my one complaint has consistently been that they often disappoint in the image quality department. The 1-inch 360 addresses this issue with a bigger, higher-resolution sensor — and the results are impressive.

On paper, the 6K resolution of the 1-inch 360 doesn’t seem much larger than the 5.7K of other Insta360 cameras (such as the One X2). However, in practice, that smidge of extra resolution is very noticeable and results in much sharper images than I’ve come to associate with 360 cameras. More important is the size of the large 1-inch sensors behind its twin lenses. These let in significantly more light and offer much better dynamic range. This allows the camera to perform well in low light and high contrast situations.

A good example of where these improvements are significant is in a deep, dark forest on a sunny day. You’re filming in a dim environment, but the tree tops and sky overhead are very bright, and there are a lot of intricate, fine details in the scenery around you. Previously, when filming with 360 cameras featuring smaller sensors and lower resolution, I found that they struggled badly to produce adequate results. However, the 1-inch 360 handles these challenging conditions well and produces good-looking video.

In all honesty, this might be the best camera available for easily capturing the night sky.

Another example of where the 1-inch sensor shines is at night, recording star lapses. In all honesty, this might be the best camera available for easily capturing the night sky. It delivers truly spectacular results that can be tweaked and customized in post-processing. Astrophotography is a tricky business since it takes so long to capture even a short time-lapse. However, with the 1-inch 360, you can create half a dozen different shots from the same clip and have each appear unique by applying different effects and choosing various angles and zooms.

It’s a great feeling to film with a 360 camera and know that you’re going to get high-quality results.

If there’s one thing I don’t like about the 1-inch 360 camera, it’s that it’s not fully waterproof unless you also put it in an optional diving case. This is a very minor gripe, as the camera is water-resistant and can easily withstand damp conditions so long as you don’t try dunking it in the ocean.

It’s also quite rugged, something I accidentally put to the test in the early morning hours while recording a star lapse. A bird decided to use it as perch and ended up tipping the tripod over onto the sand and pebbles. It came through in perfect working order aside from a few minor scratches on the lens. These scratches didn’t affect image quality in any noticeable way. However, it is worth noting that those great big lenses are more likely to incur accidental scratches in scenarios such as this due to their sheer size.

I’ve long been a fan of Insta360’s comprehensive and intuitive approach to enabling you to connect your camera to just about any device and edit footage. The Android and iOS apps are excellent, as are Insta360’s desktop application and Adobe Premiere Pro plugin. I used all these platforms while testing the 1-inch 360 and have no complaints about the experience. The Bluetooth and Wi-Fi system in the 1-inch 360 makes it effortless to connect to your phone or tablet.

Insta360 rates the battery life of the 1-inch 360 camera at 62 minutes of 6K 30 fps recording time. I found this to be roughly accurate, and while I wouldn’t say the battery life is particularly impressive, it is quite adequate. Star lapses use up the battery after approximately three hours, so if you plan on filming more than one star lapse per night, you’ll want to carry several spare batteries.

I never ran into any issues with overheating, though it did get quite warm once while I was editing footage while wirelessly connected to it from my iPad mini 6 in 90-degree heat. That really qualifies as a stress test of the system, to which it held up admirably.

The Insta360 One RS 1-inch 360 edition is available today for $800. That’s certainly a pretty penny, but given the sensor size of the camera and its outstanding capabilities, that cost is a bargain. There’s no 360 camera even close to this price point that can rival it for image quality. An upgrade kit for One R and One RS system users is available for $650, so if you already own one of these cameras, you can get the 1-inch 360 lens at a lower price.

The 1-inch 360 is a truly impressive option as an all-in-one content creation machine.

The Insta360 One RS 1-inch 360 Edition is quite simply the best 360 camera you can buy right now, by a considerable margin. It takes all of Insta360’s excellent software that creates stable, seamless 360 content, and implements it in a camera that offers a major upgrade in terms of resolution, low light performance, and dynamic range. The result is a 360 camera that is much more versatile than anything that’s come before. Add to this its compatibility with external microphones, and the 1-inch 360 becomes a truly impressive option as an all-in-one content creation machine.

If you’re looking to spend less money, an Insta360 One RS with the older 360 module is a great option. The image quality isn’t nearly as good, but it’s usable, and the camera is fully waterproof without needing external housing. It’s also smaller and lighter, which can be a definite advantage. Also, you can always take advantage of the modular One RS system and upgrade at a later point to the 1-inch 360 camera.

Another potential alternative is the Insta360 Sphere, which attaches to a drone and can capture truly incredible aerial imagery while rendering the drone invisible in the final footage. However, keep in mind that you will need to also have a compatible drone to use that camera.

A competing high-end 360 camera is the Ricoh Theta Z1. However, given that the Theta Z1 is much more expensive, records at a much lower resolution, and is overall starting to seem very dated, the 1-inch 360 is the obvious winner in this comparison.

One of the great things about Insta360’s modular system is that it extends the life of its products by enabling you to upgrade them incrementally. With this in mind, you might very well be able to carry on the 1-inch 360 camera through several generations of Insta360 One series cameras and still be using it for many years in the future. Given that this modular platform has been around for a few years and seems to be both successful and passionately supported by Insta360, I’m confident it has a long life ahead of it.

If you’ve been holding out for a 360 camera with a higher degree of image quality, then this is that camera. Despite its high price, this is the one I’d recommend to most people interested in getting into 360 videography.

Topics
Video-editing app LumaFusion to get a Galaxy Tab S8 launch
The best 360-degree camera apps for iOS and Android
Insta360 cameras take a speedy ride around Monaco’s F1 track
The Insta360 Sphere is a virtual invisibility cloak for drones
Insta360 is about to reveal … exactly what?
How to remove the background from an image
Instagram boss says to expect even more video content
6 awesome Earth images captured from the ISS in July
This GoPro Hero 10 bundle is $100 off at Best Buy today
The best iPhone tripods for 2022
Watch this Mavic 3 drone soar above the world’s highest mountain
How to watch DJI unveil an all-new drone today
DJI Avata vs. DJI FPV: Which first-person drone is best for you?