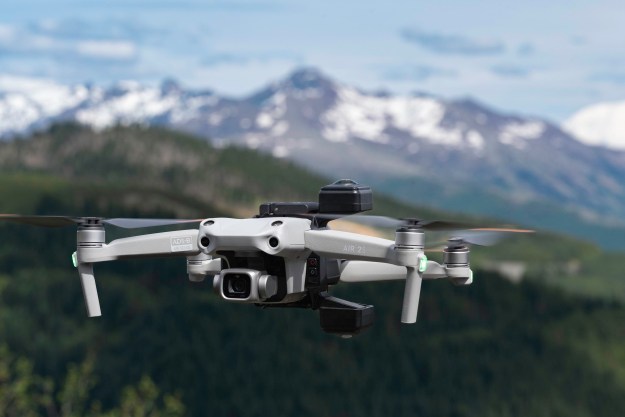 “The Insta360 Sphere turns your drone invisible, allowing for an incredible degree of creative freedom.”

The dream for 360 cameras is ultimate creative freedom, yet they still face certain limitations. The Insta360 Sphere solves one of those limitations by taking 360 video to the skies and making your drone disappear. This camera is designed specifically for the DJI Air 2 and Air 2S drones, two of the best and most popular drones in DJI’s lineup, and it might just be the best accessory ever made for a drone.

The Insta360 Sphere works by placing one camera above the drone and one below and then stitching the two hemispherical video feeds together to create one seamless, spherical image. Since the drone is between the two cameras, it’s completely absent from the video, allowing you to look in any direction without getting the drone in the show. It’s a fascinating concept, but how does it hold up in practice?

The Insta360 Sphere is built of rugged metal and plastic. In short, it seems quite durable. It clamps down and locks securely on your drone, so it’s not going to fall off midflight. However, it’s important to note that the Sphere isn’t waterproof, so don’t fly it in conditions where it might get wet. Also, with my large fingers, I found it difficult to insert and remove the microSD card and operate the power and record buttons. While these things were annoying, I don’t consider them significant concerns.

To keep the drone out of your footage, the two cameras on the Sphere must be below and above the drone. This means that they protrude out from the drone. And as you might expect, it’s crucial to be mindful of the lower camera during takeoff and landing. Insta360 provides lens protectors and a landing pad to help solve this problem, though I had some issues with these precautions.

For example, the first time I flew with the Sphere, I used the landing pad and lens protectors as instructed. However, when coming in for a landing, the smooth surface of the lens touched down first, and the drone slid sideways off the landing pad onto the ground. Fortunately, I installed the lens protectors, so no permanent damage was done, but the resulting scratches meant the end of that set of lens protectors.

Since that experience, I’ve been taking off and landing on my hand. This is the method I usually use for flying drones, as most locations where I like to fly don’t have a flat surface for landing. This poses some danger to the pilot, so I can’t recommend it due to safety concerns. Instead, I recommend finding a flat, grassy space to place the landing pad where the drone will have a safe surface around it if the landing goes awry.

I’m also not a fan of using the included lens protectors, even though they did save the camera on my first flight. This is a personal preference on my part, and one that extends to my various other cameras. Placing any surface in front of a camera lens degrades image quality to some extent. If you want to capture the highest-quality footage possible (like I do), you may want to fly without the lens protectors. Just remember that you do so at your own risk.

Insta360 engineers faced a remarkable challenge in designing the Sphere, and what they accomplished is impressive. The compromises this required create some challenges for the user, but I got used to them fairly quickly during my time testing the camera.

Carrying any extra weight on a drone will impact battery life and handling. Having the Sphere on my Air 2S resulted in about a 20% decrease in flight time, and I noticed a significant reduction in responsiveness. It’s important to be aware that the drone has more momentum and will take more time and distance to come to a stop at high speed.

The one significant problem I encountered with the Sphere is that, when recording, it somehow interferes with the drone’s GPS. More specifically, recording with the Sphere results in a 10mb drop in signal. Under ideal conditions, this doesn’t affect the drone’s GPS performance. For example, when flying over the ocean, I experienced no interruptions to the GPS. But whenever flying in forested, hilly, or mountainous terrain, the GPS is reduced, and the interference from the Sphere makes the signal intermittent at best.

The good news is that this doesn’t affect the drone’s performance beyond GPS functions. In my testing, the consequences include not being able to track the drone on a map and not being able to rely on the “Return to home” functionality. Essentially, you’ll want to be more careful while flying and stay within the visual line of sight.

The camera itself performs very well. It’s reliable, and I never experienced any errors, corrupted footage, or overheating. Overall, the filmmaking advantages provided by the Insta360 Sphere outweigh the compromises it poses to drone performance.

The Sphere captures 5.7K video, which is practically identical in quality to Insta360’s other cameras — including the One X 2 and One RS 360 module, both of which I’ve used extensively. Since 5.7K is what I’d consider the absolute minimum for 360 video capture, it’s important to realize going in that there will be some noise and pixelation visible depending on how you edit. However, I long ago realized that with 360 cameras, image quality is secondary to the creative potential that they offer. That is more true than ever with the Sphere.

Flying sedately over a field, circling a tree, or gliding under a bridge may sound like mundane drone shots. But that’s only until you’ve filmed them with the Sphere and get those shots into a video editor. Set a couple of keyframes, speed up the footage, rotate it here and there, and suddenly, you’re racing across that field at breakneck speed, doing a high-speed orbit of the trees, and performing somersaults under the bridge.

One of the best uses for the Sphere is allowing users to capture exciting acrobatic FPV-style footage while flying slowly with a calm and safe DJI Air 2S. This effect only breaks down a bit when you’re flying around moving objects (and when you accelerate the footage). But if you’re out flying in the mountains or the forest, it looks absolutely amazing.

You can also achieve many other more outlandish effects, such as a “tiny planet” look, or the inverse, where the sky is a sphere with the landscape wrapped around it. Alternatively, you can use more advanced editing software such as Adobe After Effects and create truly unique and bizarre imagery straight out of Doctor Strange or Inception. There’s also the potential to create 360 VR experiences that totally immerse the viewer in the joy of flight.

The Sphere is fully compatible with Insta360’s excellent software suite, including desktop PC, iOS/Android apps, and an Adobe Premiere Pro plugin. I’ve used each version to varying extents. For quick and easy editing on the go, I love using the Insta360 app on my iPad mini 6. The desktop app is great for more precise work at home, while the Premiere Pro plugin is helpful for integrating footage into my video creation workflow. Whatever platform you’re editing on, Insta360 has made the process remarkably intuitive while retaining plenty of depth and granular control.

The Insta360 Sphere is available now for $430, which might seem a little steep. However, this is such a niche and unique device that I believe the price tag is reasonable. If you don’t already own a compatible DJI drone, a DJI Air 2 will set you back around $800, or $1,000 if you opt for the Air 2S.

The Insta360 Sphere is a genuinely innovative camera that offers exciting new creative possibilities. While it certainly has a few flaws — and is perhaps a niche product — I would highly recommend it, particularly if you already own a compatible drone. The creative possibilities are truly amazing right out of the gate, and even more so once you really dig into editing and manipulating the footage you capture.

The closest thing to the Sphere is a drone made by BETA FPV that is designed to carry the Insta360 One R. That kit is actually less expensive than buying an Insta360 Sphere and DJI Air 2 drone, but the caveat is that you also need to know how to fly FPV drones. That means a lot of practice. If you do go that route, I’d also recommend getting a small, cheap practice FPV drone that won’t set you back too much because you will inevitably crash. Flying with the Sphere on an Air 2 drone is a safe and hassle-free experience with a much more gentle learning curve.

Another possibility is to mount a 360 camera (such as the Insta360 One RS or One X 2) on a drone. I’ve been doing this for some time now with the DJI FPV drone, and have created some really cool videos with that setup. However, it’s not really the same, as it’s difficult to keep the drone out of your shot. That can yield an effect not unlike riding a Star Wars speeder on Endor, which may be cool, but it’s also limiting. The bottom line is that there’s nothing exactly like the Insta360 Sphere out there.

Considering the durable construction of the Sphere, and assuming that you don’t fly the drone in the rain or suffer some kind of critical accident, this camera should perform well for some time to come. Its longevity is inextricably tied to the longevity of the DJI Air 2 and 2S drones. These will almost certainly be replaced with new models in a few year’s time and the current models discontinued. However, drones can last for years if well cared for, so I would estimate the Sphere could last anywhere between five and 10 years.

It’s also worth considering that the 5.7K resolution of the Sphere is really the bare minimum for capturing 360 photos and videos. In several years’ time, I expect most 360 cameras will shoot 8K and offer significantly better-looking footage. However, that’s pure speculation on my part.

If you want a ready-made solution to capture aerial 360-degree footage without getting the drone in your shot, the Insta360 Sphere is pretty much the only game in town. It opens the door to some really exciting creative possibilities and allows you to capture truly unique footage. If you already have a DJI Air 2 or 2S drone, this is an incredible accessory. If you don’t own one of those drones, the Insta360 Sphere is a compelling reason to buy one.