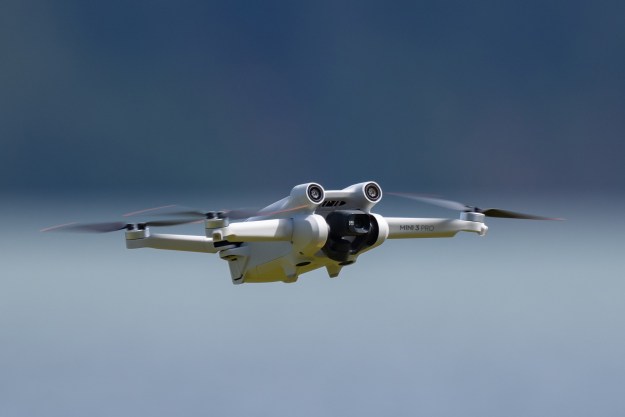 The world has grown smaller for drones these past few years. The skies have become increasingly restrictive as governments pass new regulations that make it difficult or impossible to take to the skies with flying cameras to capture the magnificent and varied landscapes of the planet from an aerial perspective. Many of these regulations are based on weight, making 250 grams the cutoff point above which lies legal headaches, and below which is relative aerial freedom.

That’s why, as exciting and powerful as DJI’s larger drones may be, it is their smallest and lightest drone that will likely be the vehicle of choice for the vast majority of would-be pilots. The DJI Mini 3 Pro weighs in at 249 grams, and with massive upgrades over its predecessor, this Mini aims to bring high-end features to a pint-sized drone.

This is certainly an odd-looking little drone, but that oddness is due to the necessity of shaving off every fraction of a gram from the Mini 3 Pro. However, the fundamental operation of the drone is much the same as it is for its various siblings in DJI’s lineup. A plastic cover protects the gimbal, while the arms that support the four rotors fold snugly into the fuselage.

The battery slots into the rear of the drone, where it clips in very securely. I prefer this rear battery-mounting system to the top-mounted batteries found in some older DJI drones, as I believe it offers better protection from moisture.

You have the option of two different controllers to go along with the Mini 3 Pro: The now standard RC-N1 that is included with most of DJI’s current lineup and hooks into a smartphone or tablet for the display, or the new DJI RC, which is almost as exciting to me as the drone itself.

In terms of build quality, the Mini 3 Pro feels rather delicate due to its extremely light weight, yet it’s very well constructed. The light weight, coupled with the relatively low speed of this drone, might actually increase its chances of survival in crashes, as the forces involved will be less severe than with a larger drone. However, that’s pure supposition on my part, as I, fortunately, stayed accident-free in my time with the Mini 3 Pro, in part due to its excellent obstacle-sensing capabilities.

A major upgrade that really qualifies the “Pro” moniker of the Mini 3  is its camera. In many lowerpriced and smaller form factor drones, a common compromise has been camera capabilities, primarily in terms of sensor size. The sensor in the Mini 3 Pro isn’t exactly massive, but at 1/1.3 inches, it’s certainly larger than what would typically be expected. In practice, it delivers photos and videos that are quite stunning in their clarity and detail.

The Mini 3 Pro can capture 48MP RAW photos, and shoot video in 4K at up to 60 frames per second, with D-Cinelike color mode being available for video. The Mini 3 Pro also features dual native ISO, which means that it can capture HDR footage that doesn’t lose details in the shadows or highlights.

While the image quality is indeed impressive, I’m even more impressed by the range of movement present in the drone’s camera. The Mini 3 Pro is capable of shooting vertical photos and video, and of looking straight up — both capabilities that, to my knowledge, are practically unique in a drone.

The Mini 3 Pro isn’t the speediest drone out there, but it’s no slug either. It can fly at up to about 35mph, and I never feel overly limited by its speed. As with other DJI drones, you have several different speed options including cine (slow), normal, and sport (fast). All three are useful for various situations, but it’s important to note that obstacle avoidance isn’t available in sport mode.

Despite the trees thrashing around me, the drone stayed stable enough to record a short time-lapse video of a distant cloudburst.

The Mini 3 Pro can also stand up to some fairly significant winds, as I found out when I had it up in the air filming an approaching thunderstorm. Despite the trees thrashing around me, the drone stayed stable enough to record a short time-lapse video of a distant cloudburst. It’s rated to withstand wind speeds of up to 10.7 meters per second.

In terms of battery life, the default battery the Mini 3 Pro ships with provides up to 34 minutes of flight time, which is plenty. However, if you want more flight time, the optional Intelligent flight battery will keep you in the air up to 47 minutes. However, those larger batteries also increase the weight of the drone beyond the 250-gram sweet spot. I just used the smaller, lighter batteries and found that I could do a lot of flying.

Signal transmission is strong and provides a high-resolution, low-latency feed from the drone, which makes it very nice to fly. Once or twice, the signal did temporarily cut out for a few seconds, but I’m not going to hold that against it, since I have been using prerelease firmware. It’s an issue I occasionally encountered with the Mavic 3 shortly after that drone launched last year, but it was quickly patched. However, it’s something that early adopters might want to look out for.

The Mini 3 Pro is controlled through the DJI Fly App, so it was a very comfortable and familiar experience for me, given that the other drones I’m currently flying also use this app. I have no complaints regarding the app, as it functions very fluidly and reliably, and provided easy access to all the settings and controls I need.

There’s also a host of intelligent shooting modes, such as Quickshots, Mastershots, timelapse, panorama, Spotlight 2.0, and Point of Interest 3.0. ActiveTrack 4.0 offers effective subject tracking, which, when combined with the drone’s tri-directional obstacle sensing and APAS 4.0, is quite effective at following subjects while avoiding collisions.

The DJI Mini 3 Pro is available starting today in several different kits. Interestingly, DJI is offering the Mini 3 Pro on its own without a bundled controller for $669. This means that if you already own the RC-N1 remote, you can just use the remote you already have and save a few bucks. If you do need a controller, you can opt to get the RC-N1 with the drone for $759. If you want the new DJI RC remote with the built-in screen (which I highly recommend), it’ll set you back $909.

Though the Mini 3 Pro costs considerably more than its predecessor, it’s such a significant upgrade that it easily justifies the extra expense.

The DJI Mini 3 Pro is the best drone for most people to buy, given that it provides robust, modern drone features and a high-quality camera in a drone that’s light enough to be legal to fly in more places than heavier drones. Even if you live somewhere where drone laws are more relaxed, the minuscule size and weight of the Mini 3 Pro make it easier to carry with you and more likely to find a place in your bag. The DJI RC remote and ability to capture vertical photos and videos are also truly game-changing.

Whether you already own a larger, heavier drone, have a Mini 2 and are looking to upgrade, or are completely new to flying, the Mini 3 Pro offers compelling value to everyone.

At a price point only a bit higher than the Mini 3 Pro, the DJI Air 2S is certainly worth considering due to its larger sensor and comparable capabilities. However, it’s slightly larger and heavier, so it doesn’t fall below the 250-gram cutoff point. Also, if you want to use a controller with a built-in screen, you’ll have to also spring for the DJI Smart controller, which is pricey. Also, when directly comparing the performance of the Air 2S to the Mini 3 Pro, I found that I preferred the experience of flying the Mini 3 Pro.

The DJI Mavic 3 is a far more powerful drone than the Mini 3 Pro; it’s an incredible device, but it is quite large and is significantly more expensive than the Mini 3 Pro. On the other end of the spectrum, the older DJI Mini 2 weighs just 249 grams and is extremely affordable. If you want to save a considerable amount of money but still capture decent aerial images, the Mini 2 is a great option.

On balance, I think the Mini 3 Pro is the best overall drone in DJI’s lineup, though others may be preferable depending on your specific needs and budget.

Pilots are still flying DJI Phantom drones from the distant past and capturing amazing footage. All of the DJI drones I’ve ever used are still very relevant today, and so the Mini 3 Pro might very well last the better part of a decade.

Think of drones as flying cameras, with life spans not far removed from their earthbound counterparts. Batteries and propellers will eventually need replacing, but the devices themselves have proved remarkably long-lasting in my experience. But the tech is still advancing at a rapid pace, so in a year or two, you may be tempted to upgrade.

Given that the DJI Mini 3 Pro is remarkably feature-rich and capable given its small size, extremely light weight, and relatively low price, it’s the drone I’d recommend for most people. I’d also recommend buying it with the new DJI RC controller, since having a built-in screen in the controller is a massive improvement over having to connect to a phone.