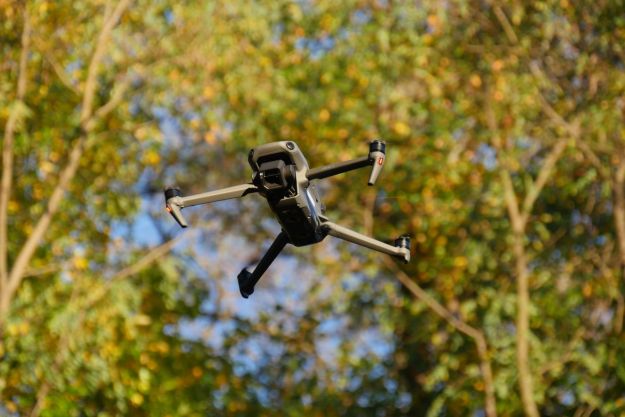 “This is the drone for serious users that want the best of the best in a portable package.”

Never the one to sit still and let the competition take a smidgen of the spotlight away from it, DJI has been on a ferocious pace the last few years. Since the release of the Mavic 2 series in 2018, the company has gone on to diversify its fabled lineup of drones. Well, it’s back to where it all started with a proper successor in the DJI Mavic 3.

Rather than breaking it down into two versions like it did with its predecessor, the Mavic 3 combines everything into one package — complete with a Hasselblad dual-camera system that features a telephoto zoom lens. Seriously, it covers just about everything pro users would want. Knowing that, the only one DJI is competing against is itself.

Not surprisingly, the Mavic 3 follows the same distinct design language that has followed the company’s lineup. While it’s technically larger and heavier at 895 grams than the Mini 2 and Air 2S, the Mavic 3 still features the same fold-up design DJI has been known for that allows for easy travel. Throw it in a backpack along with the controller and spare batteries, you’ll still have room for all of your other normal gear.

I highly suggest getting the Fly More Combo, just because for the added cost ($2,200 versus $3,000), you receive the spare batteries, ND filters, charging hub, and the most versatile drone bag I’ve come across. The tough fabric material of the bag makes it feel rugged, but I am especially astounded by the fact it can convert from an over-the-shoulder bag to a backpack.

There’s nothing terribly innovative about the design here. We’ve seen it countless times before, but at least it’s solidly constructed. There’s a disparity between its build quality versus its entry-level drone in the Mini 2 — that one feels a lot flimsier!

Taking the limelight here is the Hasselblad dual-camera system that the Mavic 3 is carrying along. Without question, it’s what most people serious about drones will pay attention to the most — and since it’s packing the biggest sensor to grace the Mavic line, there are no surprises about its performance.

Let me start off by talking about the main camera: A 20-megapixel 4/3 CMOS sensor, which is capable of shooting video at 5.1K/50fps, 4K/120fps. When it comes to taking snapshots, it’s accompanied by sharp details and incredible dynamic range. The latter’s worth detailing because I’m impressed by how well it’s able to handle such contrasting light sources — it’ll tone down highlights to balance the exposure of the rest of the scene. It’s a delight to use for all sorts of aerial photography, ensuring no matter the conditions, it’s well equipped to handle them.

Video quality out of the Mavic 3 is also just as impressive. Even though I underuse many of the Mavic 3’s features, there’s a pro mode to adjust video settings on the fly and the option for 10-bit D-Log — perfect for anyone who’s looking to get the most out of the camera. Needless to say, the 5.1K video capture is handy for editing in post, but I kept it to 4K for the majority because it’s less taxing on my computer.

When it comes to low-light, though, this is still an area of opportunity in my opinion — just because shadows tend to exhibit more noise, which becomes more noticeable if you decide to boost the exposure in post. Video, in particular, can still look noisy in the shadows, but despite this, its low-light performance by and large is substantially better than the Mini 2 and Air 2S.

As for that 162mm telephoto lens with an f/4.4 aperture, it’s useful if you know how to effectively use it. Technically, the drone switches to the secondary telephoto lens when it reaches the 7x zoom level — and I’m able to tell the difference in real time because the image looks sharper on my phone. Beyond that, including its maximum 28x zoom, the quality lessens because all those zoom levels are nothing more than digital zooms.

It’s a delight to use for all sorts of aerial photography.

I really love how I’m able to get closer to a subject without actually having to pilot the drone to be closer. I can still be at a decent distance and get good footage. Although, you’ll need some practice in keeping the subject in frame because you have to compensate for the zoom making the controls more sensitive — so it’s a good idea to switch the controls to C-mode, which cuts the drone’s movement.

You’ll want to use the telephoto lens only when the lighting is good, just because it fails to be usable in low light. In fact, I found the Mavic 3 struggling to lock onto the focus with the zoom lens when it was dark out. Plus, it doesn’t help that the quality from the zoom lens can be riddled with noise — it’s just not meant to handle low light.

I’ve always enjoyed flying DJI’s drones. The same smooth and responsive controls I’ve experienced on previous DJI drones, the Mini 2 and Air 2S, are evident here yet again with the Mavic 3. The remote controller is also the same, so it took me no time at all to adjust. Part of the reason why I enjoyed flying it is because of the new OS3+ technology in play here, which delivered a reliable 1080p feed at 60 frames per second to my phone. I was able to really get a sense of its tight controls switching to sport mode, where you can push the Mavic 3 to its speed limits.

The only hiccup I encountered piloting the drone was whenever I would finish a recording. Sometimes the feed would freeze for a brief moment, which I suspect was due to the microSD card I used — so you’ll want to use one that can write to the card faster, to prevent this particular issue.

Another reason why the Mavic 3 is such a joy to use is because of all the omnidirectional obstacle sensors all around the drone. The front, back, underside, and top of the drone are all covered, so first-time flyers or those still relatively new can fly safely. Those sensors help to inform the drone if some obstacle is in its flying path, like a nearby tree.

The only thing missing during my testing was ActiveTrack 5.0, the system that would enable the Mavic 3 to autonomously fly on its own while tracking a subject. Unfortunately, the firmware to enable this feature won’t be available until January 2022 — along with other modes such as MasterShots, Quickshots, and Panorama. Still, I did test out the Mavic 3’s auto-tracking system by selecting a subject by either choosing it on screen or by drawing a box around the subject on my phone. From there, I was able to fly the drone while the camera remained locked onto the subject. It works well, of course, but I’m eager to see how the Mavic 3 will fly itself when ActiveTrack 5.0 becomes available.

Sure, the Mavic 3’s top speed of 47 mph and transmission range of 9.3 miles should be applauded — mainly because I can fly the drone farther than previous drones in the series. But the other noteworthy thing here is its 46-minute flight time. That’s incredibly long compared to the Mini 2 and Air 2S, so I enjoyed flying the Mavic 3 without the worry of having to frequently swap a fresh one. In my testing, though, I found its battery life peaking more at around the 35-minute range. That’s still pretty darn respectable in my book!

Experienced pilots will eat up the drone’s incredible camera performance and its versatility to capture stunning content with its dual-camera system. I was able to take smooth panning shots with that parallax effect, but that was partly due to my experience. What’s missing are the other shooting modes that make DJI’s drones easy to use, even for beginners who don’t have much flight time under their belt.

I can fly the drone farther than previous drones in the series.

In particular, both MasterShots and Quickshots were not accessible with the firmware I tested. However, since I’ve tried them both on the previous DJI Air 2S, I’m confident that they’ll work flawlessly on the Mavic 3. That’s one of the many attractions of the Mavic 3, seeing that it appeals to beginners, enthusiasts, and professionals.

I’m not saying that the DJI Mavic 3 should be the drone to buy if you’re just starting out, but if you can afford it, you’ll have a ton of features at your disposal from the onset. Instead, it’s the pro user that will really get the most out of the Mavic 3 for commercial purposes.

DJI hasn’t taken a moment to breathe, so when you think about what has transpired in the last 3 years, it’s unbelievable that the company continues to push the boundaries with its drones. After tackling the entry and mid-range markets with its last few drones, the DJI Mavic 3 screams onto the scene to set the bar in the series. In fact, it’s the one to beat for those serious about their drone photography and cinematography — but I wouldn’t go far to say it’s the best drone out there.

In particular, its $2,200 starting cost is a considerable investment for the average consumer. You can buy four DJI Mini 2 drones for the price of just one Mavic 3. Knowing that, one can argue that many of its features may be overkill if they’re not frequently used. Just to reiterate again, the Mavic 3 is for serious users.

Thankfully DJI offers a couple of drones that are worth a look. The DJI Air 2S is a drone that bridges the gap between beginners and pro users, plus it’s half the price of the Mavic 3. Alternatively, I can’t stress enough about the DJI Mini 2’s appeal as the perfect starter drone.

Since it’s largely considered the flagship drone in DJI’s lineup, the Mavic 3 is solidly constructed from sturdy materials. Everything about its build quality and construction gives me confidence it’ll handle really well long term. There’s a one-year limited warranty that covers it for defects, but you can also purchase extended warranties through DJI that would also cover for damages.

You bet! If you want to have the best footage quality in a drone that’s portable to carry along, you won’t find anything better than the Mavic 3.