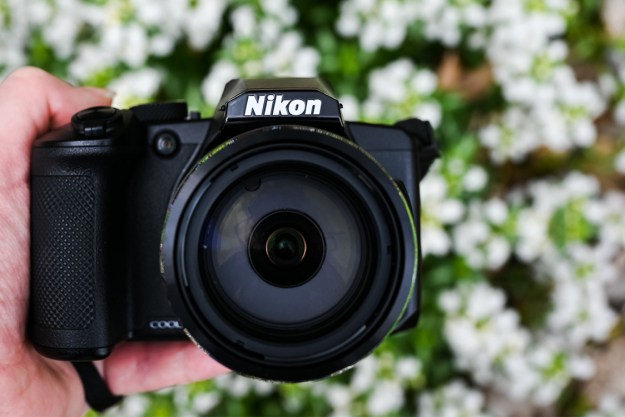 The growth of the smartphone has all but stalled the once popular budget camera category, but the superzoom category continues to show signs of life thanks to optics that can’t fit in a phone. At about $330, the Nikon Coolpix B600 falls easily into the budget category, but brings with it a 60x zoom lens. However, to reach that low price, Nikon threw out several big features, like 4K video, manual exposure, and fast performance. What’s left is a dull, limiting camera that fails to make a strong case for itself.

It’s easy to find a great camera when you have thousands of dollars to spend, so we can forgive the B600 for cutting corners to hit its low price. But the 60x zoom lens is the camera’s only hit, and with so many misses, that just isn’t enough.

The grip of the Nikon B600 says DSLR, but the controls say point-and-shoot. It’s a comfortable camera to use for long periods, which is an advantage over a phone. The low weight — just a touch over a pound — builds on that comfort factor, and draping the B600 around your neck with the included strap feels natural. The lens barrel is substantial — a pocketable camera this is not — but the body itself is rather thin for this style of superzoom.

The B600 doesn’t hold any surprises in the control scheme. There’s a mode dial on the top, zoom toggle around the shutter button, and a spattering of buttons on the back, keeping everything within easy reach of your right hand. Shortcuts buttons are offered for macro mode, self-timer, exposure compensation, flash, and video mode.

On the left at the lens barrel, a rocker button offers a second option for controlling the zoom, while a “zoom back” button temporarily zooms out so you can find your bearings and aim the camera in the right spot. This rocker button is a bit smoother than the zoom switch around the shutter button and also encourages a two-handed hold that will help keep the camera steady when using that long zoom.

This looks like a camera that would be more capable, but it doesn’t deliver on that appearance

The camera’s menu is just as straightforward as the physical controls, though that’s due in part to the budget camera only including basic features and functions. A quick explainer displays across the bottom of the menu when an option is selected, simplifying the menu for those unfamiliar with photography jargon.

But the camera lacks any sort of manual exposure mode, including aperture and shutter priority modes. It is essentially an all-automatic point-and-shoot with a big lens attached, and thus the term “bridge camera” doesn’t really apply here. Despite the DSLR look, this is very much an entry-level camera. Sure, that’s not very surprising given the price, but it is a bit deceiving; this looks like a camera that would be more capable, but it doesn’t deliver on that appearance — it even has a viewfinder bump, without the actual viewfinder.

While you won’t be able to adjust the shutter speed or aperture on your own, there are plenty of no fuss scene modes that at least grant some control over the look of the image. Options like auto, sports, backlighting, and smart portrait (which is supposed to apply makeup effects but just tends to blur the entire photo) are right on the mode dial, while several more can be accessed by rotating the dial to Scene.

While the auto modes do a generally decent job of getting the exposure right, the camera tends to keep the shutter speed relatively low in most modes. Despite offering shutter speeds as fast as 1/4000 second in burst mode, or 1/1600 for single shooting, the camera didn’t go beyond 1/250 in auto mode. Sports mode at least pushed the shutter speed to 1/800 on a bright sunny day, but with such a long lens, it seems odd that faster speeds were not being used more often.

The conservative shutter speed can be a problem. Shooting in the bird-watching mode, for example, you have to have a very still bird to get a clean photo without motion blur. A higher shutter speed would also help avoid blur from the lens itself, which is difficult to hold steady when zoomed in. Part of the problem is that the maximum lens aperture of f/6.5 at the telephoto end just isn’t bright enough, but even when raising the ISO was an option, the camera tended to keep the shutter speed below 1/250.

Alongside the lack of manual options, choices like burst mode and different autofocus settings are only available inside some shooting modes. Thankfully, you can at least turn the flash on or off.

The auto modes make the B600 easy to use, but the camera is not without its frustrations. Besides the conservative shutter, the performance is a bit slow. The maximum 7.7 fps burst speed can only continue for seven shots before slowing down in auto mode; in sports mode, we only got 4-5 shots before it slowed down, and we have no idea why. The camera takes about five seconds to process the images before it can shoot another burst. The camera also takes a few seconds after switching modes before being ready to shoot. All of this means that if you were thinking that long lens makes the B600 a good sports or wildlife camera, well, you would be wrong.

If you were thinking that long lens makes the B600 a good sports or wildlife camera, well, you would be wrong.

Thankfully, the autofocus performance isn’t as sluggish. Lock-on speed about average, although the camera had some trouble with close-ups when zoomed in, even with macro mode turned on.

What the B600 lacks in speed, it tries to make up for with its versatile lens. A 60x zoom can make a speck in the distance turn into a detailed close-up, and the B600 does that for very little cash. The macro mode allows the camera to focus as close as 0.4 inches in front of the lens at the widest angle and roughly 6.5 feet with the lens fully zoomed in. Like any camera, however, we recommend turning the digital zoom off — you can always crop your photos in post if you really need more zoom.

Another small, but helpful, upside is that the B600 battery can shoot longer than the 280-exposure rating. We shot more than 300 photos and the battery icon still read as fully charged.

As a camera that costs less than most smartphones, we can’t expect too much in the image quality department. The 60x zoom is certainly a feature no phone has, but otherwise don’t expect the B600 to deliver pictures that outshine those from your phone. Image quality is on par with the budget zoom category in good lighting conditions, such as shooting outdoors. Indoors and in low light, some smartphones can probably outshoot the B600 thanks to wider apertures and computational photography.

The 60x zoom is not uncommon for a bridge camera these days, but hard to come by outside the category. For reference, that’s equivalent to a 24-1,440mm lens on a full-frame DSLR — something that simply doesn’t exist. Image quality is relatively consistent from the wide angle to the maximum zoom, though images tend to be a tad softer both at full zoom and in macro mode.

Thanks to the optical stabilization system, it is possible to handhold that long zoom in good lighting. The stabilization isn’t quite good enough to shoot at dusk. In any light, when shooting fully zoomed in, you likely won’t have a 100% hit rate without being very careful with how you grip the camera.

The 1/2.3-inch sensor is nothing to gloat about, but such a small sensor is necessary to be able to build such a large zoom lens. Detail is decent for the class, but not enough for heavy cropping (of course, that’s what that 60x zoom is for). Similarly, you’ll want to keep the ISO as low as possible. Noise is noticeable at ISO 800, but not terrible until pushing up to ISO 3200.

While the camera captures decent shots in good lighting conditions, we couldn’t get a sharp shot indoors. That’s a mix of the camera’s smaller sensor, limited aperture, and lack of manual controls pushing the shutter speed too low to freeze any motion. Even at the wide end of the lens, which allows for the brightest possible aperture of f/3.3, minor movement still caused blur.

The B600’s video mode carries over much of the same — picture quality is good, but nothing to brag about. Video is recorded at 1080p and 60 fps; not getting 4K isn’t a surprise on such a cheap camera. Electronic stabilization can also be turned on for video, but don’t expect to use that 60x zoom without a tripod. Impressively, though, you can use nearly half of it handheld without causing too much seasickness for viewers.

The Nikon B600 offers maximum zoom on a minimum budget — but mixing a big zoom with a low price comes with some significant tradeoffs. Image quality suffers indoors and in low light, while even in good lighting the camera tends to stick with conservative shutter speeds which can introduce blur. Performance is slow, though not unexpectedly so for the budget category.

The camera lacks advanced features, but comes with a set of easy-to-use scene modes and a straight-forward menu system. Despite the bigger lens, it is also relatively lightweight for the category, and comfortable to shoot with thanks to a good-sized grip. Battery life is also solid.

Finding a $300 camera is getting tougher — but there are still a few similar options in the budget zoom category. The Canon PowerShot SX530 is about $30 cheaper and includes manual modes and a bit faster burst rate of 10 fps, but the zoom is only 50x, video is at just 30 fps, and the camera is now about four years old.

Originally priced at around $400, the Panasonic FZ80 sometimes goes on sale for around $300. Even at its original price, however, the FZ80 packs in enough features to make it the better buy, including a brighter f/2.8-5.9 lens, manual exposure modes, RAW shooting, an electronic viewfinder, 4K video, and 4K photo modes like Post Focus which lets you adjust focus after the fact.

Budget cameras typically have a shorter lifespan because of a cheaper build and fewer advanced features. Still, the Coolpix B600 should last a few years, so long as you’re fine with its limitations and don’t need a camera that offers room to grow into.

If you just want a long zoom as cheaply as possible, the B600 delivers — but that’s probably not enough. The average smartphone can shoot better pictures, and other point-and-shoots offer similar zoom levels without the B600’s limitations. Even a cheap product needs to be valuable, and the B600 just doesn’t offer enough to make it worth $330.