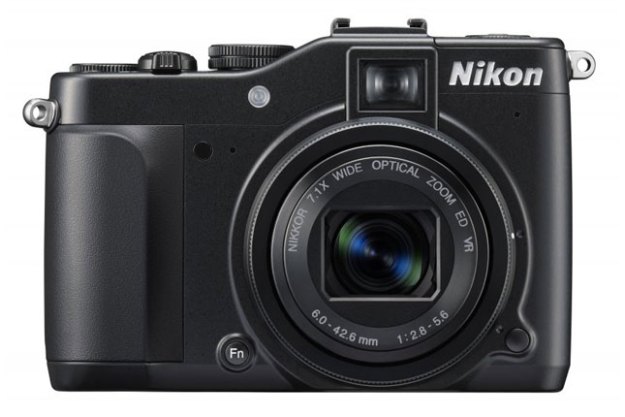 Serious shutterbugs tired of lugging around giant DSLRs have lots of options in 2011. There are Olympus PEN interchangeable lens cameras that cost anywhere from $450 to $700. Then there is the Canon PowerShot S95 or G12 style of digicam with built-in wide-angle zooms that cost less than $500. All have tweaks galore, and better-than-average picture quality. Now we’ll see if the P7000 digicam is worth the money, or is the picking greener elsewhere?

Do a quick look at the Canon PowerShot G12 and the Nikon Coolpix P7000 and you’ll think they’re twins. Both large, black-bodied cameras have a decided rangefinder vibe and very similar specs. They both cost $499 and feature 10-megapixel CCD imagers measuring 1/1.7-inches, much larger than the typical 1/2.3-inch sensors of mainstream cameras. A bigger sensor means larger pixels, which usually equates to better photos. We’ve reviewed the G12, and liked it. Yet the digital camera landscape is constantly changing as the popularity of compact interchangeable lens models continues to grow. In this category, the Sony Alpha NEX-5 is another fave, just like the Olympus PEN, but we’re getting ahead of ourselves…

The Nikon Coolpix P7000 has a bit of a throwback look and clearly won’t be mistaken for another cheapo camera. Hardly pocketsize, it measures 4.5 x 3.1 x 1.8 (W x H x D, in inches) and weighs 12.7 ounces with battery and SD card, almost the exact specs of the G12. Don’t try to read anything between the lines about this — the Nikon is made in Indonesia while the Canon is built in Japan. They are definitely not “badge engineered” like older GM cars, even though many similarities exist. One of the critical differences is zoom power. The P7000 has a 7.1x zoom that’s equivalent to 28-200mm; the G12 has a 5x zoom equivalent to 28-140mm. If you’re looking for a more potent lens, the Nikon gets a check mark. Another plus is the grip on the right with its faux leather surface. A similarly textured thumb rest is nicely placed on the back so the camera feels solid and secure overall.

The front of the P7000 is thankfully free of text (unlike the Coolpix S8100) and is very clean and understated. Along with the lens, you’ll find an AF Assist/self-timer lamp, a porthole for the optical viewfinder, Function key and another that releases the lens ring so you can add optional conversion lenses. There are also pinhole stereo mics and a remote sensor.

A quick peek at the top immediately shows the P7000 is designed for those who really want to take control of their images. Sure there’s Auto on the mode dial, but there are two other dials photographers will appreciate: one for exposure compensation (+/- 3 EV compared to the usual 2) and another that offers quick access to key parameters (quality, ISO, white balance, bracketing, My Menu and tone level information). This Quick Mode Dial is very cool. You just turn to the category you want to adjust, press the button in the middle of it, then use the scroll wheel on the back to zip through them. This is very nicely done and the onscreen graphics are quite good.

The main mode dial next to the hot shoe has the usual choices including PASM, Auto, three customizable user settings, Low Noise Night mode, Scene (18 options) and Movie (720p at 24 fps). Unlike many new models, it does not have a dedicated red-dot video button. With the Low Noise setting, resolution drops to 3 megapixels or less, and ISO can hit 12,800. More on this in a bit. Next to the shutter and zoom toggle switch is another button (Av/Tv) that lets you customize the camera even further. We used it to enable the virtual horizon histogram, a handy tool for keeping your horizons straight and a feature typically found on DSLRs like the Sony alpha SLT-A55V. In keeping with the idea this camera is for those who want total control, the flash has to be manually popped up using a button on the back left (for the record, this icon looks like Ms. Pac Man). The flash offers six different output levels, again something far beyond the usual.

The rear of the P7000 is dominated by a fixed-position, 3-inch LCD rated 921K pixels, and it’s a good one. We had no troubles in direct sunlight or dark rooms, but if there were, the optical viewfinder with diopter control was at the ready. Now for another key difference with the Canon G12: The PowerShot has a 2.8-inch vari-angle LCD rated 461K pixels you can twist into a variety of positions in order to shoot at different angles. Just with this difference alone, a hands-on test between the two is definitely in order. Other rear P7000 controls include the jog wheel, AE-L/AF-L button, Display, Playback, Menu and Delete. The controller has a rotary wheel and the four points give access to metering, macro, self-timer and flash options.

The right side has a compartment with USB and mini HDMI outs, while on the left is a mic-in option if you decide to upgrade your audio recording.

Surprisingly the built-in speaker is on the bottom, next to a metal tripod mount. In other words, you can’t rest it on the counter to review your movies as the sound will be muffled. Not a deal breaker, but unusual. You’ll also find the battery and memory card compartment here. The P7000 only accepts SD, SDHC and SDXC cards, not MMC, which really isn’t a big deal since SD cards are so affordable. Use Class 6 or better to handle the HD video.

We shot with the Coolpix P7000 at a high school reunion (great for people pictures) as well as indoors and out, capturing stills for the most part, and some videos.

Using the P7000 is as easy or complex as you’d like. We started off in Auto with resolution set at 3648 x 2736 pixels (Fine) JPEG (RAW is also available). As usual, we moved through the dial using manual options where appropriate. One thing bothered us right off the bat: There is no burst mode in Auto. You have to take single shots. Granted, you can move into P or any other manual mode, hit menu, scroll through it to Continuous, and click away. Unfortunately, it’s not worth the bother as this camera tends to move like molasses in Vermont during January. It’s not glacially slow, but at 1.3 fps don’t expect to catch speedy subjects with any sort of sharpness. Even a cat sauntering by was blurry. Not to say the PowerShot G12 is any sort of speed demon at 2 frames per second. Simply stated, compact digicams like this one, the G12, Panasonic LX5, Samsung TL500 and Olympus XZ-1 do not have enough processing power to crank off the 3 fps of even the cheapest DSLR or a compact interchangeable lens camera. We had our issues with the PEN E-PL1, but it was good for 3 fps. The Sony NEX-3 hit 7 fps. Such is life. Back to the P7000.

Photos taken at the reunion were primarily with flash, and the camera handled faces well. A large group shot taken in a fluorescent-lit library had the classic green cast in Auto, but a quick change of the white balance handled that. It’s no surprise the P7000 takes solid images of anything with a reasonable amount of available light. Macro close-ups of flowers taken in a sunny room were excellent. Overall, the results looked good and natural. It’s hard to state whether they’re “better” than the G12, since PowerShots are more vivid (which we prefer but that’s strictly a matter of personal taste). Another plus for the P7000 is its 5-way VR (Vibration Reduction) system which does an excellent job of reducing blur at slower shutter speeds.

We put the camera through our usual ISO test in available light, and found the images to be practically noise free up to ISO 400. The next steps to 800 and 1600 were surprisingly good, but quality fell off the cliff at 3200 with 6400 a serious mess. Stepping back and realizing we were shooting a compact digicam, not a DSLR, the results were impressive. We recently used the Nikon S8100 with a 12.1MP CMOS sensor, and the difference at high ISOs was very noticeable with the CMOS chip delivering cleaner files, especially at ISO 3200. That said if you keep the ISO at 800 or below, you’ll like what the P7000 captures. The Low Noise Night mode is another option for capturing images in challenging situations, such as a candlelit scene. We shot a lit candle in a dark room using this setting as well as just adjusting the ISO in Program at higher resolution. The results, as far as we were concerned, leaned heavily against Low Noise. Detail just wasn’t there and the camera had trouble grabbing focus. If you buy this digicam, stick to the main modes.

The Nikon Coolpix P7000 takes 720p videos at 24 frames per second. This is barely high-def, but if you’re not showing them on a 50-inch screen, they’ll suffice. The optical zoom works when you’re in Movie mode, which is a real positive along with the stereo sound.

Just as we wrote in our review of the Canon PowerShot G12, cameras like the P7000 used to be slam-dunk recommendations. But that was before the PEN and NEX models arrived. Granted, you’ll pay more for models like the new E-PL2 and NEX5, but you have the option of interchangeable lenses in relatively small bodies. Plus they deliver very good picture quality and much faster response. It’s hard to take issue with the P7000’s quality 10-megapixel images and a 7.1x wide-angle lens, and yet we’re reticent to go all in. The P7000 goes for around $449 at legit online retailers, but so does the older Olympus PEN E-PL1 with a 3x 28-84mm lens. Nikon’s top-of-the-line point-and-shoot is a great choice for the methodical photographer who loves taking shots of static subjects. If you’re aware of those limitations and go in with your eyes wide open, by all means proceed. But definitely consider a compact interchangeable lens camera if your budget can handle it. Times have changed.