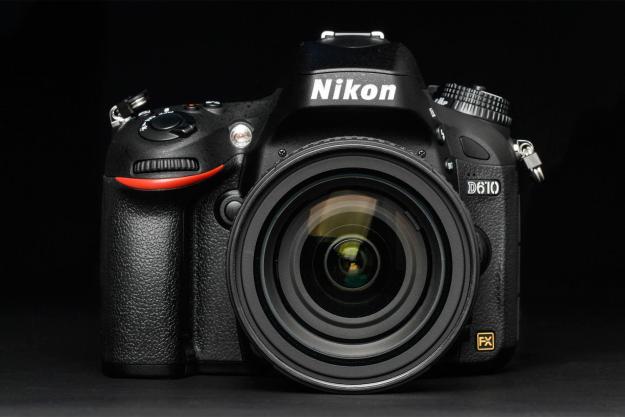 “Specs wise, the D610 isn’t as eye-popping as some of its full-frame counterparts, but don’t let that deter you from this DSLR that shoots excellent stills and videos.”

Targeted to enthusiasts and pros, the new Nikon D610 has a 24.3-megapixel full-frame sensor, plenty of response, and almost all the bells-and-whistles Nikon can cram into a DSLR. It’s not exactly a bargain – around $2,500 for a solid kit – so let’s see if it’s worth dipping into your savings account for this full-frame DSLR.

Looking for something cool, like the full-frame Sony Alpha A7? Forget it. The D610 is a very big and bulky all-black DSLR with the classic assortment of buttons and dials. Style might not be top-of-mind at the full-frame level but don’t expect anything out of the ordinary, design wise.

The key feature on the front – which has classic Nikon red swoosh on the grip – is the F-mount. Nikon has more than 100 lenses to choose from, but if you use a DX-specific lens, the frame will be cropped to APS-C size, negating the main purpose for buying a full-frame (FX) camera in the first place. In other words, those moving from an older D3100 with a kit zoom, for example, should budget for more glass. Yet, the fact that you’re even considering buying this model means you’re ready to dive into the deep-end of the photography pool.

Specs are solid but not outstanding once you get past the 24.3MP full-frame sensor.

We won’t go into every button and dial on the D610 since the camera looks like almost every Nikon DSLR. It has a deep grip with a nicely textured surface and all the important controls are readily accessible. It’s heavy, as you’d expect, weighing 28.8 ounces for the just the body, and measuring 5.6 x 4.4 x 3.2 overall. It’s dust- and water-resistant just like the very expensive D800, but to save weight Nikon used magnesium alloy only on the top and rear.

Specs are solid but not outstanding once you get past the 24.3MP full-frame sensor. Maximum response is 6 frames per second (fps) for up to 100 frames (JPEGs), ISO covers 50-25,600, and there’s a 39-point AF system (nine cross-type). These are good but not exceptional numbers. On the downside is a top shutter speed of only 1/4000th of a second (most top-tier models are 1/8000), just 1080/30p video, and mono-only recording from the onboard pinhole mics. You can use an optional stereo mic as there are inputs for one and a pair of monitoring headphones, but this is a big oversight, just as was the case for Pentax K-3.

Since this DSLR is geared for enthusiasts, the top deck has a very readable monochrome LCD for easily checking your settings. On the far left is a locking double-decker dial: the top is the main mode control while the bottom is for adjusting release modes such as burst settings, Quiet Shutter (3 fps maximum), mirror up, and so on. Highlighting the fact the D610 – while expensive – is accessible to a broad range of photographers, the main mode dial has a green Auto setting, Scene (19 choices), PASM, two user options, and flash off.

The two critical features on the back are the optical viewfinder and 3.2-inch LCD (rated 921K dots). The VF is bright with a 100-percent field-of-view, while the screen has good contrast although we ran into some serious reflectivity issues in the bright Arizona sunshine. Cranking up Monitor Brightness to +5 helped. A nice added touch is a supplied protective plastic cover for the LCD.

The D610 has all the appropriate connections including mini HDMI out. In a nod to its audience of serious shooters, the camera has two SD card slots. When one gets filled, overflow immediately goes into the second; you can also use one card as a backup of the other (redundancy).

Depending on the kit, you can get the D610 with the 24-85mm f/3.5-4.5 glass or the 28-300mm lens; you can also get both lenses for around $3K. The D610 is available as a body-only option as well, if you already have a collection of appropriate lenses. Given its sophistication, Nikon supplies a 342-page printed User’s Manual so be prepared to dive in to make the most of this DSLR. You also get a battery rated 900 shot per CIPA (a fine spec), an AC battery charger, as well as various caps and straps. The supplied disc has Nikon’s ViewNX 2 software for storing and handling JPEG/NEF (RAW) files.

After charging the battery and loading two SD cards, it was time to see what this camera could do. Although the D610 has an initially off-putting price, no one should be afraid of handling this camera. Nikon DSLR owners will feel right at home, and those who have owned other brands will have few issues getting acclimated. The most often-used controls are right where you’d expect them to be and the labels are bright and clear. And that mini-version of the “War and Peace” User’s Manual will help if anything has you stumped. Again, while it has the full-frame “mystique,” the D610 is quite usable but definitely requires a commitment due to its size and weight.

The 24.3MP full-frame sensor is the main reason this camera is north of two grand, compared to $1,200-and-up for a 24-megapixel APS-C DSLR like the D7100. Now, APS-C cameras like that just-mentioned Nikon, the Canon 70D, and Pentax K-3 are all “better than good” but if you’re a super stickler for quality, nothing beats the depth and richness of full-frame. We’ve evangelized about this level of quality for years but unfortunately you still have to spend close to $2,000-plus for it. One would’ve hoped for a dramatic price break by 2014 but it just isn’t the case (the body-only 24.3MP Sony A7 at $1,699 is about the cheapest, while the close-competitor 20.2MP Canon EOS 6D is $1,899). After examining our images – and if your budget can handle it – it’s really the move to make if you want to take your photography to the next level.

We really like the Nikon D610, as many of our photographs we shot were spectacular.

We used the D610 during many sessions in and about our various Arizona locales. We can wax poetic about the dynamic range, color accuracy, and so on, but once you closely examine photos on a large monitor (27-inches in our case), you’ll understand the reason for promoting larger sensors. Some of our sample photographs almost had a three-dimensional feel. It’s not quite the sensation we had checking out the newest 4K UHD TVs at CES but it’s distinctly better than any APS-C camera. We’re not saying you should blow-off APS-C cameras in any way, shape, or form, since there are some really terrific ones out there, but there is a noticeable difference between types of imaging devices. There is a negative when you’re shooting as this quality: Every flaw such as a teensy miss with focus will appear on your screen. Prime lenses are really the way to go since even the quality kit zoom lens supplied had occasional sharpness misses.

A plus for full-frame is shooting in low light with a minimal amount of digital noise. The D610 held up very well to ISO 1,250, and then a slight softening appeared when we moved up the scale. Some noise was visible at 2,500, with gradual deterioration as we hit the heights. You could get away with small images at ISO 8,000-10,000, but 12,800 and 25,600 were pretty poor. These results were with our usual test subject and JPEG Fine files. You can tweak noise when shooting NEF/RAW but this will give you a good idea of the camera’s abilities and limitations. With a quality wide-open lens you should be able to grab some nice available-light photographs.

Nikon has made some real headway with its DSLR movie-capturing capability and the D610 does a good-but-not-great job – you still need a Dual Pixel Canon EOS 70D or any Sony with Translucent Mirror Technology for best results. Color accuracy was spot-on but focus reaction was a bit slow when zooming. The built-in mono mic picks up lens noise, so the camera is in serious need of a wind noise filter. Overall, videos are in the definite plus camp, but the camera isn’t as strong as some of its counterparts.

We really like the Nikon D610, as many of our photographs we shot were spectacular. At the end of the day, however, the kit didn’t really wow us like the Sony A7, which is a breakthrough camera. It’s not to say you won’t be thrilled if you own it and choose the right glass, but it just didn’t rise to the level of a DT Editor’s Choice. Now, if Nikon were to sell the camera for around $1,500 (body only), we’d sing a very different song.

Update on February 9, 2014: We originally recommended looking at the D600, but because the D610 has an improved shutter mechanism and will eventually replace the D600, we suggest you look at the D610.