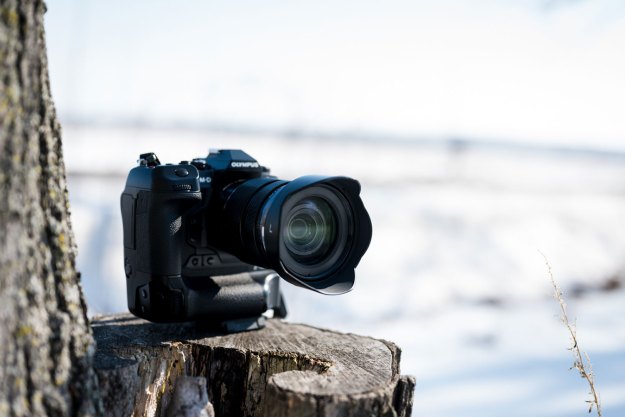 “Combining a wide-to-telephoto range with close-focus capability, the 12-100mm is a sharp, versatile shooter.”

The main selling point of an interchangeable lens camera may be, well, the interchangeable lenses, but that doesn’t mean DSLR and mirrorless camera owners don’t find themselves wishing for a single lens that can do everything. The Olympus M.Zuiko 12-100mm F4.0 IS Pro fits that description, offering the equivalent of a full-frame 24-200mm zoom range along with close focusing for a maximum 0.6x magnification (full-frame equivalent). And this is no cheap consumer lens, as such superzooms often are; as part of Olympus’ Pro line — which also includes the stellar f/1.2 prime series — the 12-100mm uses higher-end optics on the inside and a weather-sealed metal body on the outside.

It is also the only current lens that allows the new Olympus E-M1X to reach its peak stabilization potential of 7.5 stops. With the pair, we shot nighttime landscapes with 10-second exposure times — without a tripod. That in itself may be reason enough for Olympus shooters to add this lens to their kits.

While the lens has a lot going for it, other factors may make some photographers pause. Like the not-so-bright f/4 maximum aperture, the tendency to create starbursts even when you don’t want them, and the $1,200 price point (again, this is not a cheap consumer superzoom). But from wet Florida days to frozen Michigan ones, we put this lens through its paces to see how it held up; and the results were mostly impressive.

The Pro in the lens name is immediately apparent the first time you pick up the M.Zuiko 12-100mm F4. The all-metal body feels good in the hands. While we weren’t intentionally tossing the lens around, the body feels like it could handle some minor roughhousing without suffering a major catastrophe. Travel photographers may gravitate toward it for this reason.

With the Pro-line weather-sealing, the lens can withstand splashes, dust, and freezing temperatures. We shot in all three of these conditions in the rain, on a dirtbike track, and in the snow. The lens was unfazed by the weather — we just dried it off before putting it back in the bag, but it never slowed down or gave us any issues.

While the metal construction and weather-sealing likely makes the lens heavier, it still didn’t feel too unwieldy considering the long zoom range. It weighs just under 20 ounces, which isn’t lightweight by any means, but considering the range, it wasn’t so bad to haul around and was certainly much lighter than what an equivalent full-frame lens would be.

The lens also doesn’t hog up a lot of real estate inside a camera bag. Lengthwise, the 12-100mm measures less than five inches when at the widest zoom position — it’s smaller than a 24-70mm f/2.8 full-frame lens, but with a much longer reach. It accepts 72mm filters at the front.

Factor in the close focusing distance, and the M.Zuiko 12-100mm Pro IS is a lens that can cover a variety of shooting scenarios.

Two controls (outside the manual focus and zoom) sit on the lens — an on-off switch for the image stabilization and a L-Fn, or lens function, button. The L-Fn button can be customized within the camera menu and programmed as a shortcut for a number of different controls, from depth-of-field preview to autofocus lock.

Like other models in Olympus’ Pro series, the focus ring slides down to activate manual focus, which also uncovers the focus scale that’s hidden when using autofocus. The focus ring is smooth and easy to turn, while the zoom ring has a little more resistance but is still easy to use.

The 12-100mm, equivalent to 24-200mm on full frame, is quite a bit of range to work with, roughly an 8.3x zoom. Factor in the close-focusing distance, and the M.Zuiko 12-100mm Pro IS is a lens that can cover a variety of shooting scenarios. Olympus calls it an “everyday professional zoom” and the lens is certainly versatile enough to earn the designation.

Focusing as close as 5.9 inches on the wide end and 17.7 inches on the telephoto end, the lens can grab sharp near-macro images. The .3x and .21x (equivalent to a .6x and .42x on a full frame camera) magnification isn’t enough to earn a true macro designation, but offers decent close-ups for photographers that don’t shoot macro often enough to invest in a true macro lens.

The lens uses a High-Speed Imager AF system. Paired with the flagship E-M1X, focus locked on quickly. We didn’t have any difficulty with the focusing system — the only time we switched to manual focus was for a scenario every lens struggles with: Trying to lock onto a single branch out of hundreds in a close-up shot of a tree.

As with most modern lenses, the autofocus and zoom isn’t perfectly silent, but it is still very quiet. When shooting video, be aware that some clicking noises may be recorded in particularly quiet environments; in normal situations with more background noise, it won’t even be noticeable.

The M.Zuiko 12-100mm lens is constructed from 17 elements in 11 groups, an optical design Olympus says is intended to achieve maximum resolution. We didn’t see anything on the contrary. Superzoom lenses are rarely regarded for their image quality, but the 12-100mm F4 Pro appears to be the exception to the rule.

That’s not to say it’s perfect, however. While the lens does a good job preventing multicolored “rainbow” flare, it still has a tendency to create single-color flare in some situations. Interestingly, we didn’t have any issues with flare at golden hour, when the sun is low on the horizon, but shooting into direct sunlight when it was higher in the sky did create a unique three-point star flare.

It’s the only lens that lets the new Olympus E-M1X reach its peak stabilization potential of 7.5 stops.

In some night landscapes, some larger light sources led to minor ghosting, as well. Thanks to the its seven-blade aperture, light sources in the frame will create 14-pointed starbursts at small apertures — but these bursts will actually remain visible even at wider apertures, an effect that may not always be desirable. There is also noticeable diffraction at f/22, where interference turns the starbursts into a series of concentric circles rather than a solid shape.

Sharpness, however, was mostly impressive and both the wide and telephoto ends of the zoom. Like all lenses, resolution isn’t quite as good at the edges, but the fall off is better controlled than on budget lenses and, considering the long zoom range, certainly nothing to complain about.

Chromatic aberration is also well controlled, although you can find some colored fringing if you look long and close enough. Some lights in night landscapes occasionally had small blue halos, but that was about it.

At the widest angle of view, the lens does have some pronounced barrel distortion (where straight lines appear to curve, especially towards the edges of the image). Barrel distortion progressively improves as you zoom in, being much slighter at 35mm though still showing some traces out to 50mm. Again, we can’t really complain here — barrel distortion is common in many wide-angle lenses, and given that this is an 8x zoom, some distortion is the trade-off for versatility.

The f/4 aperture is another potential drawback for some users. On the smaller Four Thirds sensor, it’s simply not wide enough for certain situations. You won’t get a shallow depth of field without zooming in, and it doesn’t let in enough light to keep your ISO low when working in low light situations (Four Thirds sensors can’t handle higher ISO settings as well as their APS-C and full-frame peers). That said, at the telephoto end, particularly at near-macro distances, it can still create soft backgrounds with nice separation.

What’s more, the low light issue is often solved by the excellent image stabilization. The 5-axis Sync IS works with in-body stabilization on Olympus cameras, and on the E-M1X that equates to 7.5 stops of shake reduction, an additional 0.5-stop improvement over the next best lens. So long as you have a stationary subject, this means you can leave the ISO low and shoot at very slow shutter speeds handheld. Handholding night landscape shots, for example, with shutter speeds several seconds long is almost unbelievably impressive.

The M.Zuiko 12-100mm f/4 IS Pro has a lot going for it. The Pro-level optics are sharp, colored flare and colored fringing are kept to a minimum, the 24-200mm range and 0.6x magnification (full-frame equivalent) make the lens one that a lot of photographers will opt for when they can only pack one. And of course, that image stabilization allows Olympus bodies to reach their maximum potential.

But we haven’t yet met a perfect lens, and of course the 12-100mm is no exception. While it is versatile, there are certainly brighter options than an f/4 for photographers working with low light or trying to really get that background separation. There is also some significant distortion at the wider angles, and point light sources have a tendency to render as starbursts (which can be a good or bad thing, depending on your vision for the image). Finally, the lens’ $1,200 list price stems from the versatility and higher-end optics, but it’s a price point that many will find too steep for a do-everything superzoom.

Finding a lens with the versatility of that 12-100mm range is tough to do — the M.Zuiko is the only 12-100mm Micro Four Third lens listed at retailers like B&H. There are a handful of budget lenses with some similar versatility — like the upcoming M.Zuiko 12-200mm f/3.5-6.3 lens — but there tends to be a gap in image quality between budget lenses and higher-end optics, along with differences in build quality and the loss of that constant aperture.

Camera lenses tend to have a longer lifespan than the cameras themselves — and investing in a weather-sealed lens with a metal body can extend that lifespan even further. Save any catastrophic accidents, the 12-100mm should last many years.

If you need the most versatility, the best stabilization, and Pro-series sharpness (and have $1,200 to spare) then yes. This is an especially good option for travel photographers or anyone else who needs to cover as many shooting situations as possible while packing light.