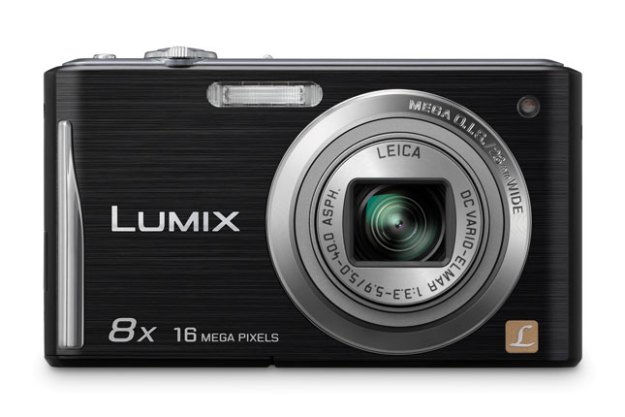 “The Panasonic Lumix DMC-FH27 has some good things going for it with a compact body and a versatile 8x optical zoom, but it's video is behind the times.”

How do you tell if one 16-megapixel point-and-shoot camera is better than the other? We’re here to help you find out before you drop 200 bucks.

The Lumix DMC-FH27 is a very compact digicam with a potent 8x zoom, potentially making it a good choice for vacationers. There’s nothing as convenient as having a pocket camera with a range of 28-224mm for grabbing nice wide-angle landscapes and group shots along with the ability to zoom in on subjects far away. This camera is hardly unique as Nikon’s new Coolpix S6100 ($199) also has 16MP resolution and a 7x 28-196mm zoom. And we recently reviewed the Sony DSC-WX9, another 16-megapixel aim-and-forget camera but that Editor’s Choice winner has a 5x 25-125mm lens. As we’ll see, cameras don’t live or die on megapixels and focal length alone.

The FH27 is available in black, red or silver and it looks just fine—nothing too cutting edge or dull (our review sample was black). It measures 3.9 x 2.2 x 1.1 and weighs 5.6 ounces with battery and card. When powered off, the lens has a nice silver accent while on the far left is a silvery bar that acts as the grip – super sturdy it’s not, but at least it adds a bit of stability. The front fascia is dotted with icons and logos, so it’s a bit much for our taste. Also on the front is the flash and AF Assist/self-timer lamp. The key feature here is the extending 8x Leica DC Vario-Elmar lens. The widest aperture is f/3.3 (w) and f/5.9 (t) so right off the bat you know this baby needs lots of light for best results. The top digicams now have f/1.8 and f/2.0 lenses but they’re a lot more expensive—and mega zooms are never that wide open.

The top of the camera has a silver accent and here you see the four pinhole speaker, single pinhole mic for mono sound, on/off switch, shutter surrounded by a zoom toggle and Extended Zoom (E.Zoom) button. This is handy as it lets you zoom quickly out from wide angle to 10x then again to 22x. Tap it once more and you’re back to wide angle. At these higher numbers, resolution drops. Think of it as a tool for quickly grabbing a faraway subject. If you have a moment, just ratchet it back with the toggle to the 8x of the optical zoom to get the full 16MP.

The rear of the FH27 has a few raised bumps on the top right that act as a thumb rest, a 3-inch LCD screen rated a decent 230K pixels and that’s it. There’s no mode dial or four-way controller with center set/OK key or anything else. You’ll make all of your changes using your fingertips or the stylus on the touch screen, just like the new Canon PowerShot 500 HS. Whether this is a good thing, we’ll let you know shortly.

On the right side is the eyelet for the wrist strap and a compartment with USB-A/V out. Here’s where Panasonic should take a look at the competition such as the $299 Canon ELPH 500 HS – this touch screen camera is supplied with a stylus but it’s integrated with the strap so you’ll never lose it. Knowing our propensity for misplacing small objects, we attached Panasonic’s stylus to the strap. It looked like something from a locker room but at least we knew where it was! A much more important issue was the fact the camera only has an A/V out. Where the heck is the mini HDMI out for the 720p video? The Nikon Coolpix S6100 has one as do many new cameras with HD movie capability, but no luck here. This is a big strike one for the FH27.

The bottom of the Made In China digicam has a metal tripod mount and compartments for an optional DC coupler and the battery/SD card. The battery is rated 250 shots per CIPA which is good for a touch screen model. The Canon 500 HS with a slightly larger and better screen (3.2-inches, 461K pixels) lasts for 180. The Panasonic accepts newer SDXC media and you should use Class 6 or higher for best results.

The Lumix FH27, of course, along with a rechargeable battery and plug-in charger. You also get USB and A/V cables, wrist strap and stylus pen for the touch screen. Along with a 36-page printed Basic Owner’s Manual the CD-ROM has the full manual as a PDF and PhotoFunStudio 6.0 software for handling downloads and editing chores as well as a trial for Super LoiLoScope software used for burning and editing videos. LoiLo is a small Japanese company we’ve never heard of, so don’t feel bad if you’re mystified at that name.

We used the DMC-FH27 intermittently over the course of several weeks with subjects ranging from beaches to budding spring flowers. This camera came along with us to Brooklyn’s Coney Island as we tested it and what seems like 400 other cameras—actually it was four from Canon, Nikon, Sony and Panasonic. This was good as we could compare the same shots from the quartet. Once done, it was time to make 8×10 full bleed prints, enlarge the images 100%+ on the monitor and review everything on a 50-inch Panasonic plasma.

Before getting into the results, let’s discuss the touch screen interface since it’s the only way you interact with the camera other than physically pressing the shutter and zoom toggle. We hate to say it, but this interface is so far behind the new Canon as to seem from the Pleistocene Epoch. It’s not quite that bad, but it really seems very dated compared to Canon’s much larger and readily identifiable icons. The Canon screen is much more responsive and although both let you swipe through choices, the 500 HS is like comparing an iPad 2 to a Coby Kyros using Android 2.1-no contest. We rarely had to use the stylus with the Canon (fingernails were just fine) but the Panasonic’s smaller icons had us tapping away with the plastic stylus. Consider it swinging strike two.

The FH27 is definitely an aim-and-forget camera with no options for adjusting apertures and shutter speeds. The camera has Intelligent Auto (iAuto) which most people will use all the time but this too is behind 2011 levels. With iAuto or Smart Auto, the camera adjusts to the scene in front of it—we’ve always liked this feature as it works well. The Panasonic recognizes six scenes but new Canon PowerShots respond to 32. It’s not a deal breaker just showing how behind this camera really is.

Your other options include Normal which is similar to Program in other cameras. Here you can adjust exposure compensation, ISO (100-1600), white balance, OIS, focus-type, macro, color mode, Intelligent Exposure and Intelligent Resolution among others. In Scene mode you have 28 options, My Scene lets you save a frequently-used Scene mode while Motion Picture adjusts resolution type with 1280 x 720 at 24 fps the max. Hate to belabor it but the more expensive Canon is 1920 x 1080 at 24 fps; 720p is 30 fps. Sound is also stereo not mono. Worse yet, you cannot zoom when shooting videos with the FH27. Sheesh.

We checked out videos on our monitor and the QuickTime clips were OK on a small screen; unfortunately the SD card reader on our plasma only handles AVCHD files. Without the mini HDMI out, we were stuck with the monitor. And as far as we could see Panasonic doesn’t even have an accessory cable that offers component-out for this camera.

To be honest we had low expectations regarding the digital noise handling capabilities of a 1 /2.33-inch 16-megapixel CCD. CCDs typically are much noisier than CMOS devices. Our test results confirmed our initial take—you won’t be happy with the speckles and inaccurate color at ISO 800/1600. 400 is passable but clearly this camera needs a lot of light for good shots–whether it’s sunshine or the flash. We’ve tested a number of newer 12MP CMOS digicams and their low-light results were far superior. And don’t worry– you can easily make large prints even with the lower resolution. The recently reviewed 16-megapixel CMOS Sony WX9 leaves this camera in the dust although it doesn’t have the enhanced zoom range. In other words please don’t be sold by resolution figures alone—reviews matter.

The camera isn’t a total disaster as it focuses quickly and the burst mode is typical of a point-and-shoot (around 1.4 fps). The focal range is good although we do prefer a wider opening such as 24 or 25mm. Colors in the sunshine were natural and on the money. The optical image stabilization also did a good job as most images were very sharp.

In theory, the Panasonic Lumix DMC-FH27 had some good things going for it such as compact body with a versatile 8x optical zoom. Yet its video capibilites really seem behind the times with only 720p at 24 fps, mono sound and no zooming capability. The Intelligent Auto only has six choices versus 32 on new Canon PowerShots and the touch screen design is dated as well. Check out the Canon 500 HS to see what we mean. Toss in the noisy 16MP CCD and it all adds up to strike three. As they say in baseball, there’s always next year.