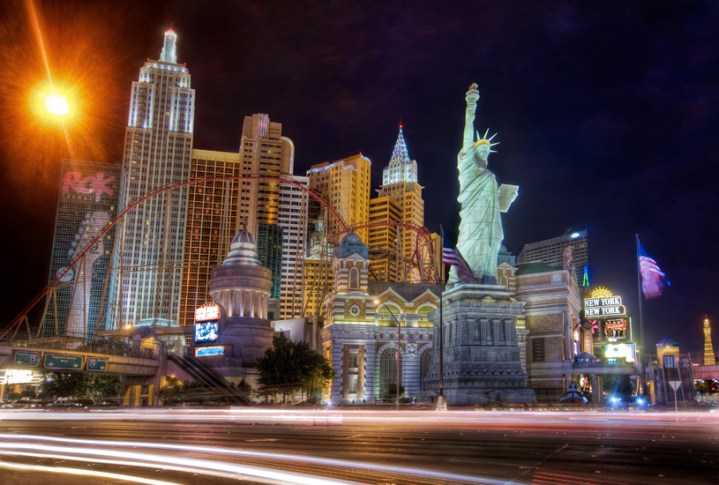 We can safely assume that the U.S. Postal Service (USPS) felt rather proud of its Statue of Liberty Forever stamp when it released it in 2010.

But three months after its launch, the USPS discovered that instead of showing the Statue of Liberty in New York City, the stamp actually featured a photo of a half-size replica in Las Vegas (above). Three billion of the stamps had been printed before the mistake was noticed.

Instead of trashing the stamps, the USPS continued to sell them, with an official insisting at the time that even if they’d realized it wasn’t the actual statue, it “would have selected this photograph anyway” because it fit the desired stamp design perfectly.

The stamp was finally retired in 2014, but only because the creator of the Las Vegas statue, Robert Davidson, decided to sue the USPS over copyright infringement. The legal battle has just ended with the USPS being hit with a $3.5 million judgment.

According to the Associated Press, Davidson’s attorneys argued that his Lady Liberty was unmistakably different from the original as it was more “fresh-faced,” ″sultry,” and also “sexier.”

Fighting back, attorneys for the USPS insisted Davidson’s design was too similar for him to be able to claim copyright infringement.

Bringing the case to a close last week, Federal Judge Eric Bruggink sided with Davidson and ordered the USPS to pay him $3.5 million, which it can comfortably take from the $70 million profit that the stamp reportedly generated from nearly five billion sales.

Todd Bice, representing Davidson, told the Associated Press that his client was happy with the outcome, adding, “As the court noted, Mr. Davidson’s artistic creation of the Las Vegas Lady Liberty is highly unique and attractive, which is what prompted the U.S. Postal Service to select a photo of his work … over hundreds of other images.”

The USPS said it’s still reviewing the judge’s decision and may comment later.

So how exactly did the USPS find the image of Davidson’s statue, and how did the mix-up occur?

Well, it bought a license to use the photo after finding it on Getty Images, a photo library that represents hundreds of thousands of photographers around the world.

The photo of Davidson’s statue was taken by Raimund Linke. While the image was titled “Statue of Liberty,” the accompanying keywords noted that it was a “Statue of Liberty replica” in “Las Vegas.” But the USPS failed to notice, resulting in an error that’s ended up costing it millions of dollars.