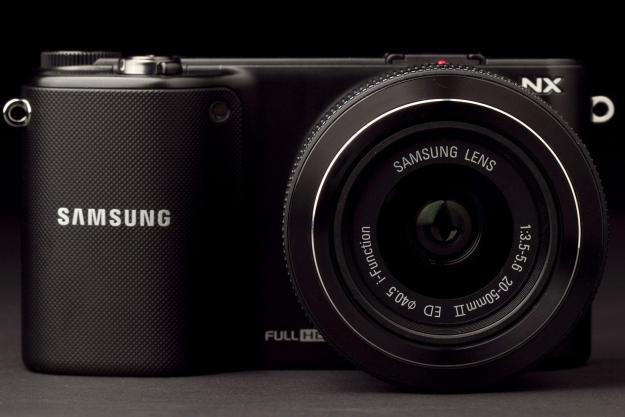 “The Samsung NX2000 is a solid CSC that takes terrific photos with enough light, has a top-notch touchscreen, and a Wi-Fi arsenal that’s still best in its class.”

Recently, we dubbed the Samsung NX300 compact system camera (CSC) with an Editor’s Choice award. Now along comes a modified version, the NX2000 that costs a lot less money. The NX2000 takes terrific photos when there’s enough light, but is the savings enough to justify some of the shortcomings like a slower autofocus

A quick glance at the 20.3-megapixel NX2000 ($599 with 20-50mm iFunction lens) and you might think you’re looking at a Sony NEX mirrorless model. The body styles are very similar, with both featuring grips that feel nicely fitted. This design is very different than the two-tone retro styling of the $749 NX300, so if you want to go old-school the more expensive model is the pick. Naturally, the NX2000 has its own distinctive logos and a very different mount for interchangeable lenses than Sony’s – in this case it’s the NX mount with over a dozen options available besides the supplied 20-50mm iFunction glass. Since the camera has an APS-C sensor, the digital factor is 1.5x, so the kit lens has a decent 35-75mm spread. We say decent because it’s really a starting point as you’ll soon purchase another lens or three as you delve into the camera. The compact NX2000 measures 4.7 x 2.5 x 1.4, weighs just 8 ounces (without battery or lens), and is available in either all-black or all-white.

Samsung is the hands-down leader in the camera/Wi-Fi arena.

The top deck has a hot shoe for the supplied flash, two stereo mics, a Direct Link button for Wi-Fi transfer to a smartphone called AutoShare, a control dial, as well as a combo on/off switch and shutter. The biggest difference on the surface between the NX300 and NX2000 – besides their stylistics cues – is the fact there is no physical mode dial; you make all of your adjustments using the huge 3.7-inch touchscreen display on the back of the NX2000. The screen is a beauty even though it’s not a tilting AMOLED like the one on the NX300; it’s a fixed position TFT LCD display rated 1,152K dots and handles adverse lighting conditions quite well. Note: The 3.7-inch spec sounds great but you really only have about 3.3-inches to frame your shots since part of the screen is specifically used for icons. Still, it’s much bigger than most competitors’ and a real plus.

Since you’ll primarily interact with this camera using touches and taps, there are only three hard keys on the back – a red-dot video button, Mode, and Playback. Mode is kind of strange since Samsung uses a Home-like icon. Something got lost in translation here but just tap it and the virtual mode dial appears; this can also be accessed by turning the control dial.

On the right side is a compartment for USB and mini HDMI connections and on the left is a tiny speaker and the NFC tag for communicating with compatible devices such as a tablet. The bottom has a tripod mount and compartment for the battery and microSD card slot. We’re not big fans of this tiny flash media but it’s simple enough transferring images using an SD adapter.

The Samsung NX 2000 kit comes with the body, 20-50mm iFunction lens, various caps, and a strap. You also get an external flash, rechargeable battery (rated a solid 340 shots), and an AC adapter/USB cable for charging. We prefer standalone wall chargers since you can juice a spare while still trying to squeeze the last clicks from a dying battery. What we most certainly love is the fact Samsung supplies Adobe Photoshop Lightroom on a CD, an editing program worth over $100. You’ll also find another disc with the full owner’s manual, a printed Quick Start Guide, and a pocketsize Quick Reference Guide for fast top-line shooting/operating tips.

Samsung is the hands-down leader in the camera/Wi-Fi arena. The NX300 was a winner and the NX2000 is similarly outfitted with dual-band Wi-Fi, but the newer model adds NFC technology. Since we already had the Samsung camera app on our Motorola Droid 4 smartphone, pairing the two devices was a breeze. When you set up Direct Link on the camera, it will send images to your smartphone. Sharing at that point is up to you (Facebook, YouTube, text messages, whatever). What can we say? Samsung has this thing down. Note: We admit to being NFC challenged –our iPad 2 and Droid 4 do not offer this technology.

The 3.7-screen is a beauty even though it’s not a tilting AMOLED like the one on the NX300…

For all the Wi-Fi pluses, the NX2000 is primarily an image/video capture device and we put it through its paces over the course of many weeks in various locales. As noted up top, the Samsung primarily operates via the touchscreen. Of course, you’ll physically zoom the kit lens which was part of our review rig. Since this is an iFunction lens, it’s much more flexible than traditional glass from Nikon, Canon, Sony, et al. When you move out of Auto, you press the iFunction button on the lens to access ISO, exposure compensation, white balance, or the intelligent zoom. Just swipe the settings and make your adjustments for the ones that work best. The onscreen graphics are well designed and the touchscreen is very accurate when scooting through parameters.

Changing modes is also very intuitive. Press Mode (or Home) and four options appear – Auto, Smart, Expert, and Wi-Fi. Auto is Smart Auto where the camera guesses what’s in front of it and adjusts accordingly. Smart is where you’ll find the scene modes and there are 14 options, while Expert gives access to Program, Aperture- and Shutter-Priority, Manual, and Custom. PASM are straightforward while Custom lets you set up three favorite shooting situations with a dozen parameters for each. With the Wi-Fi option you’re given six choices including Mobile Link, Remote Viewfinder, Auto Backup, e-mail, SNS&Cloud, and Samsung Link. With this last one you get access to web storage and sharing images/videos via DLNA (many HDTVs have this).

We started out using JPEG Super Fine, then shifted to RAW+JPEG SF. For the record, the camera also takes MPO files so if you purchase an optional lens, you can take 3D photos. This didn’t rock our boat when we tested the NX300, so there was no need to travel that path once again. The camera also grabs Full HD movies in 1080p at 30 fps using the MP4 format.

The NX300 and NX2000 have very similar tech innards, specifically the 20.3-megapixel APS-C sensor and DRiMe IV processor, yet there are some critical differences. Along with Contrast Detect AF, the NX300 has phase detection AF elements on the chip whereas the NX2000 uses Contrast Detect. What this jargon means is pretty simple – the more expensive camera focuses much more quickly even in low-contrast scenes. We were shooting some admittedly very dark shots of mountains at dusk and the NX2000 had difficulty finding an edge to lock on to – the shutter wouldn’t fire. This was a tough one but we never ran into those issues with the NX300.

Another point of difference is the top shutter speed – it’s 1/4000th of a second for the NX2000, 1/6000 for the NX300, which means you’ll have a better chance of grabbing sharp action shots with the speedier version. Not that 1/4000 is shabby since most CSCs and DSLRs have that spec; we just want to point out there’s a reason the cameras are $150 apart.

We’ve become rather entranced by the Arizona sunsets we’re blasted with every evening. We won’t bore you with too many pretty samples, just suffice it to say, the NX2000 delivers really fine and accurate colors of the evening sky. Just make sure you’re not shooting a dark mountainside with few lights to help the AF system. Please keep our earlier complaint in context since that was a rare instance, but it did happen.

When the NX2000 is given enough light – be it shadow or bright sunshine – it performs with aplomb. You’ll really like the detail, colors, and dynamic range. Even with the kit lens, we distinctly captured tiny spiders on a cactus using the Touch AF. Overall the camera responds quickly and the user interface is among the best out there. Oh, you’ll need to check out the manual for a thing or two but you can use it right out of the box without taking a tutorial.

With Full HD videos, the color is also quite rich and accurately on target. As is the case with almost every camera out there, the stereo mics make gentle breezes sound like a hurricane and there’s a bit of rolling shutter. Another negative? The mics pick up mechanical sounds as you zoom the lens. If you’re recording a concert or loud party this wouldn’t be an issue but it’s definitely noticeable when you’re panning quiet vistas.

On its own, the Samsung NX2000 is a solid CSC that takes terrific photos with enough light, has a top-notch touchscreen, and a Wi-Fi arsenal that’s still best in its class. However, the camera does not exist in a vacuum and we’d spend the extra money for the NX300. If we were looking to save $150, however, and put that money as partial payment on a second lens, then we have no problems recommending the NX2000. Just forget about shooting dark gray cats on a moonless night!