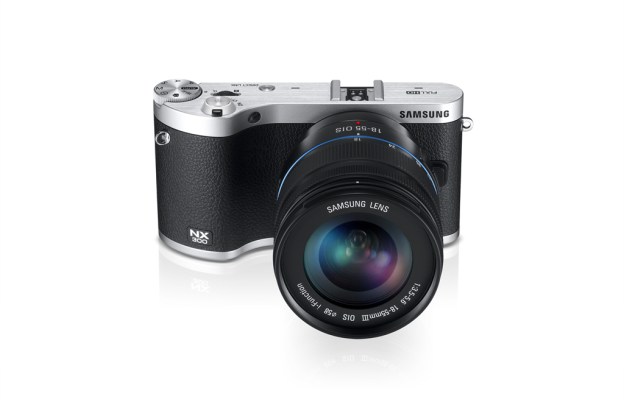 Check out our review of the Samsung NX300 mirrorless camera.

Samsung wanted to get a jump ahead of the avalanche of CES digicam announcements next week, so enter the new NX300 Smart Camera. Part of the company’s NX series of Compact System Cameras, the 20.3MP NX300 will replace last year’s NX210; it’s scheduled to ship in March and will cost $750 with an 20-50mm kit lens. The two-tone, faux-leather silver-and-black bodied mirrorless, interchangeable lens camera has a nice retro vibe; it’s also available in a white/silver combo.

Samsung has embraced Wi-Fi connectivity more than most camera manufacturers and its Galaxy Camera is considered by some analysts as the new digicam benchmark. The NX300 has dual-band Wi-Fi connectivity (2.4G/5G), which Samsung claims significantly improves the flow of images between the camera, PCs, tablets, and smartphones. Samsung execs we spoke to emphasized their aim is to improve the overall Wi-Fi experience since incorporating Wi-Fi into a camera isn’t a big deal – making it easy to use and functional is something else. They’ve also added a Direct Link hot-key to assign wireless apps, as well as smartphone compatibility through the Samsung SMART CAMERA app (Android and iOS): AutoShare to automatically send images to a designated smartphone; Mobile Link for copying/pasting photos and movies from camera to phone and vice versa; and Remote Viewfinder for remote operation of the camera via the . There’s also an Auto Backup feature for automatic wireless backups to a PC or Mac.

As part of Samsung’s goal to make its cameras easy to use, they have loaded the NX300 with the auto Smart Mode. A notable feature here is i-Depth, which allows you to preview depth of field through the display.

As always, we’ll reserve judgment until we get a production unit but a real plus is the camera’s tilting 3.3-inch AMOLED touchscreen (40-degree down, 90-degree up), making it easier to tap through menus and enter passwords and also to compose shots in various angles. The NX210 by comparison had a slightly smaller, non-capacitive screen.

Let us not forget this is a camera and taking good pictures and videos is the critical issue. We used the most recent generation of NX models and were quite happy with the results. The NX300 – with its 20.3MP APS-C sensor – should be even better as it now features a new hybrid autofocus that combines phase detect (105 points) and contrast detect (247 points) AF for speedier, more accurate results (Samsung says it could be the “fastest focusing camera” available in market). This is a feature you’ll see a lot more of in the coming days. Video quality has also been improved to 1920 x 1080 at 60p. The sensor also allows for a ISO range of 100 to 25600.

As a bonus, Samsung is bundling a copy of the latest version of Adobe Lightroom with the camera.

Also new for the NX300 is 3D still and movie capture, thanks to Samsung’s new DRIMe IV image processor. It takes special glass to handle 3D capture and it just so happens Samsung also announced a new NX 45mm (F1.8) 3D lens that takes those stills and videos. When in 3D mode, two Liquid Crystal Modules flip down in the lens, both shuttering left and right to capture at different depths in quick succession to create the 3D effect. The lens also handles 2D with a flip of a switch on the lens barrel; it’s compatible with other Samsung CSC cams, but only the NX300 can utilize the 3D functionality for now. The 3D lens is also due in March for $500.

We had a chance to try out the NX300 with a variety of lenses, including the NX 45mm 3D lens, for some initial impressions. Samsung said the body has been slimmed down with an optimized right grip, and it’s noticeable. The camera is well-built and feels solid and comfortable in the hands, although it’s definitely a two-handed operation when used with a larger, heavier lens attached. The touchscreen is fairly responsive (as we’d expect from a company that makes the most-popular Android smartphones). One of the cameras we tried seemed to have an autofocusing issue, but Samsung alerted us that these were engineering samples and weren’t perfect. Still, image quality looked pleasant from our quick preview, but we will reserve judgement.

Stay tuned for dozens of new cameras and camcorders that will be unveiled in just a few days. We can almost guarantee you’ll be very pleasantly surprised.

This $30 screen protector creates 3D views on a smartphone without the glasses
Forget 8K, the Insta360 Titan records 11K that can still play back on smartphones
Sony’s new 3D tech push isn’t for TVs — it’s for our phones
Deluxe D-Lux: New Leica compact camera adds quality and luxury
How to remove the background from an image
Instagram boss says to expect even more video content
6 awesome Earth images captured from the ISS in July
This GoPro Hero 10 bundle is $100 off at Best Buy today
The best iPhone tripods for 2022
Watch this Mavic 3 drone soar above the world’s highest mountain
How to watch DJI unveil an all-new drone today
DJI Avata vs. DJI FPV: Which first-person drone is best for you?
Astronaut reveals source of ‘intriguing’ bright light on Earth