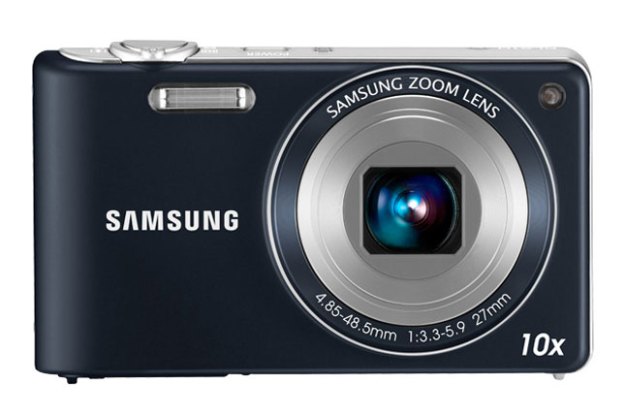 “The Samsung PL210 seems like it’s more of an occasion camera than a device that will be able to meet all of your pocket cam needs.”

The Samsung PL210 has a simple setup while boasting some impressive specs – namely, it’s 10x optical zoom and wide angle lens. The camera performs admirably for a pocket cam, but touting itself as a supremely thin design housing big capabilities is a bit of an overstatement: It’s neither shockingly tiny nor does it absolutely blow the competition away.

But that doesn’t make it bad. Many of the PL210’s functions are easy to use and at a $199.99 pricetag, there’s plenty for the exclusive-handheld camera set to enjoy.

The PL210 has one undeniably impressive feature, and that’s its 14.2 megapixel sensor combined with its 10x optical zoom. Its dual image stabilization and 3-inch LCD are also nothing to sneeze at, but the pocket cams serious selling points are its superzoom, wide angle capabilities and pocket cam size.

That said, the chassis does not have a $200 feel. It isn’t particularly slim or sturdy–it falls somewhere between fitting comfortably in your pocket and just big enough to be a nuisance. It isn’t obnoxiously large or bulky, but you aren’t going to be picking this device up because you can easily slip it into your back pocket. Basically, there’s nothing to ooh and aah about when it comes to its body and build. It can actually be a little unsteady when sitting on a flat surface.

Its dedicated power and shutter buttons are responsive and sit on top of the camera, thankfully separated from all other controls. On that note, the PL210 has a particularly simple UI. Mode, Menu, Playback, and trash function have designated buttons, while all other controls can be found on the mode dial. It’s an easy, familiar setup, so no surprises there.

The PL210 comes with a variety of what are becoming standard built-in features, like a smart filter, face, blink, and smile detection, and beauty shot to minimize general unsightliness. Right on trend, it also has a variety of art filters.

Aside to the PL210, Samsung outfits you with a rechargeable AD43-00199A battery, an AC adapter/USB cable, a camera strap, the Quick Start manual, and a user manual CD.

There’s no arguing that the PL210’s 10x zoom and wide angle lens are impressive for its size. The Canon PowerShot SD1400 is a comparative compact camera and similarly priced, and in comparison has a 4x optical zoom. Many lineups feature a compact “superzoom” of some sort, but they tend to be more expensive and marketed as compact DSLRs, featuring more manual controls and usually attracting more experienced or aspiring photographers. So Samsung deserves praise for outfitting the PL210 with such an impressive optical zoom while keeping the control functions simple and user-friendly for novices.

But many photographers will likely find themselves ready to upgrade relatively soon after using the PL210. Its zoom capability doesn’t quite make up for the somewhat lacking functions further within. The most gleaming error is the laggy AF, which would sometimes not focus at all or take its sweet time doing so. And once you’ve outgrown its auto settings, we found that navigating the camera’s UI for manual controls was somewhat confusing and seemed to involve more steps than were necessary.

Otherwise, compact digicams above the $150 mark from most manufacturers are somewhat expected to come equipped with a few things: Some sort of smart/auto setting, a variety of filters or effects, HD recording, and some degree of manual controls. Samsung does include these features, but their performance doesn’t quite measure up to competitors’ devices. We shot in various modes and found several filters to be–in plain speak–low quality. Beauty shot and the Magic frame in particular come to mind. The former seemed to simply implement a fuzzy focus and unnaturally brighten the image, and the latter was some sort of horrible Ed Hardy-type graphic framing the photo. That said, more traditional scene settings like Sunset and Landscape work as expected. The Flash also has customization options for red eye reduction, which worked well.

Outside of scene settings, the PL210 has smart filters which were actually fairly impressive for a pocket cam: Fisheye effects on cameras in this price rage tend to be disappointing, but the PL210’s was convincing. It even has an Instragram-like retro setting, and jumps outside the norm with a sketch filter and even the ability to customize a singular image’s RBG settings.

The PL210 has a bit of an amateur feel and leaves us wanting more. Fun filters and limited manual controls can only keep you entertained for so long and the PL210 seems like it’s more of an occasion camera than a device that will be able to meet all of your pocket cam needs. But at $200, it manages to outshine enough of the competition that it deserves consideration as a new photographer’s first go at the point-and-shoot. And to be honest, we appreciate a manufacturer investing in elements like the PL210’s 10x zoom, 14 megapixels, and 3-inch LCD screen in favor of trendy features like a designated Facebook button or automatic photo tagging.