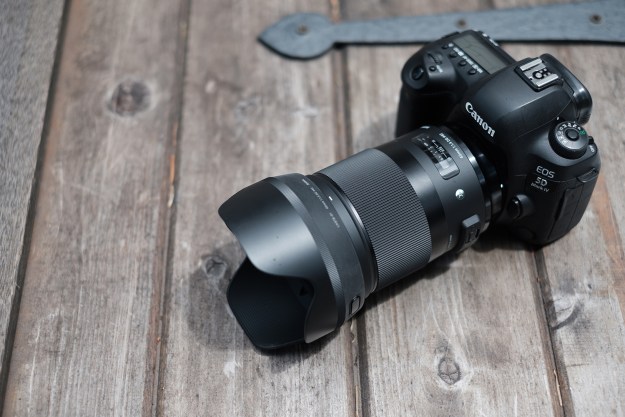 When I first heard of Sigma’s 40mm F1.4 Art lens, I was a little confused. Sigma already had both 35mm and 50mm prime lenses in its high-end Art series; was a 40mm necessary? And wasn’t this focal length reserved for things like compact pancake lenses?

Sigma developed this lens with cinema applications in mind, where 40mm is apparently a sought-after focal length. On a cinema camera using a Super35 sensor, 40mm is equivalent to a full-frame 60mm, a good mid-telephoto length. The lens is also designed to resolve enough detail for 8K video.

This is among the most stunning lenses I’ve ever used.

However, the 40mm Art is still a full-frame lens. While a rehoused cinema version is available, the model I tested was the standard photography model, in Canon EF mount with autofocus.

I wouldn’t usually reach for this lens instead of a 50mm or 35mm alternative, but I can’t deny the 40mm Art is subjectively beautiful and (almost) technically perfect. It’s large, heavy, and expensive (for a Sigma), but it offers performance to please even the most demanding photographers. It’s not an odd fit between a 35 and 50mm lens. It’s a possible replacement for both.

This is among the most stunning lenses I’ve ever used. Sigma has churned out win after win with its Art lenses. From the light vignette at f/1.4, to smooth bokeh, it’s a perfect choice for portraiture. It’s not a headshot lens, but for full-body or environmental portraits, it yields dreamy results.

If you use Adobe Lightroom CC, you may be aware of the heavy-handed sharpening that is applied to every photo by default. When I review lenses, the first thing I do is take that Sharpening slider and pull it all the way down to zero.

But when I did that with an image from the Sigma 40mm Art, nothing happened. I couldn’t tell the difference. That’s how sharp this lens is.

On extremely close inspection, I could tell that edges pop slightly more with Adobe Lightroom CC’s sharpening, but it looks artificial. The natural sharpness captured by the Sigma 40mm Art is more than enough.

With the 40mm Art, however, it’s just not there. I couldn’t see it even when looking at individual hairs against a bright sky in a portrait. The $4,845 Hasselblad XCD 80mm f/1.9 has more chromatic aberration.

All this holds true not just for the center of the image, but the periphery, as well — and even at f/1.4. There is no detriment to shooting at a wide aperture. Just pick the depth of field you want, and that’s it. The combination of bright aperture and edge-to-edge sharpness would make this a great astrophotography lens. Yes, the lens does vignette at the wider apertures but, as I also said in my review of the 28mm F1.4 Art, it’s a subjectively pleasing look most of the time, and can be corrected in post.

There’s also a slight barrel distortion, but I never would have noticed it were it not for turning on lens corrections in Lightroom and comparing the before and after images. The optical performance of this lens is simply astonishing.

It outperforms Sigma’s 28mm Art, which I reviewed at the same time, and carries the same price. There are a few reasons why that’s true. Wide-angle lenses, particularly with large apertures, are more difficult to engineer, and correcting chromatic aberration is tough. That holds the 28mm back relative to the 40mm lens. Also, while I was testing the 40mm on a Canon 5D Mark IV, the 28mm was on a Nikon D850, which has about 15 megapixels on the Canon and will likewise be better at showing any defects in a lens.

The Sigma Art line puts image quality above all else, so Art lenses are never lightweights. But the 40mm still stands out as one of the larger options, measuring a little over 5 inches long and weighing 2.6 pounds, with an 82mm filter thread. Compared to the 35mm F1.4 Art, it’s 1.5 inches longer and over a pound heavier. It’s not as big as the 3.6-pound 105mm F1.4 Art, but it’s absolutely massive for a 40mm.

That weight comes from an additional three glass elements over the 35mm, for a total of 16. That’s one fewer than the 28mm Art, yet the 40mm is about a pound heavier than that lens. Mounted to the rather large 5D Mark IV DSLR, it didn’t make for a comfortable travel kit. That’s not what the Art series is about, of course, but remember that if travel is in your plans.

The 40mm Art is dust and splash resistant and feels like it could take a beating. I’ve been impressed with the build quality of Sigma’s Art lenses in the past, and this is no exception. Even the lens hood is solid. It securely mounts to the lens with a button to release it, making sure it doesn’t fly off if you bump the lens.

Autofocus is handled by Sigma’s Hyper Sonic Motor (HSM). It’s a smooth and quiet system, but I did notice the 40mm performed slower than the 28mm Art. Again, because I was shooting these lenses on different camera bodies, I can’t say for sure if the 40mm itself was at fault. Still, the 40mm Art’s performance was strong, and most photographers won’t find flaw with its autofocus speed.

The Sigma 40mm F1.4 Art is stunning. It takes Sigma well beyond its role as a budget, third-party manufacturer, and into the realm of premium lens maker. At $1,399, it’s not affordable, but it offers an unbeatable value at that price if you can afford it.

I think people who will most appreciate this lens are astrophotographers, for its edge-to-edge sharpness at wide apertures. Portrait photographers will also love it, although wedding and event shooters may find its size and weight hard to work with.

If you somehow don’t already own a 50mm or 35mm, or you’re ready to upgrade, this lens makes a lot of sense. But if you’re happy with your current 50 or 35, I can’t recommend dropping nearly $1,400 on a very similar focal length. Still, if you’ve the cash to burn, the 40mm Art will be an incredible addition to your camera bag.

Not among 40mm alternative. No direct competitor comes close.

There are competitive 35mm lenses out there, including Sigma’s own Art model — which is considerably less expensive at just $774 at the time of writing. The 40mm does have better image quality overall, but even some professionals may not need the extra capability.

Like all Sigma Art glass, the 40mm F1.4 is built to last. Treat this lens as an investment and it should outlive several camera bodies.

Yes. It’s expensive, but the Sigma 40mm Art is a wonderful lens that will impress even the most seasoned photographers.

Topics
RAW power: Fujifilm brings RAW video to medium-format GFX 100 — and a new lens
The $600 Panasonic Lumix S 20-60mm is a unique, affordable zoom
Olympus E-M1 Mark III vs. Olympus E-M1 Mark II: Is the upgrade worth it?
Olympus OM-D E-M1 Mark III vs. OM-D E-M1X: High-performance flagships compared
How to remove the background from an image
Instagram boss says to expect even more video content
6 awesome Earth images captured from the ISS in July
This GoPro Hero 10 bundle is $100 off at Best Buy today
The best iPhone tripods for 2022
Watch this Mavic 3 drone soar above the world’s highest mountain
How to watch DJI unveil an all-new drone today
DJI Avata vs. DJI FPV: Which first-person drone is best for you?
Astronaut reveals source of ‘intriguing’ bright light on Earth