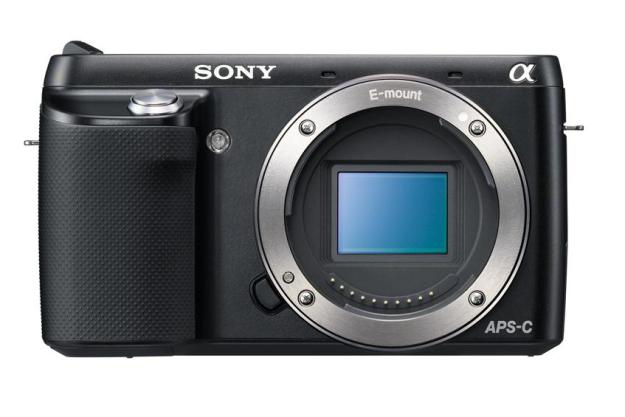 “The small size, quality of the stills and videos and the nicely-loaded feature set make this camera a good option for anyone shopping for a CSC or entry-level DSLR this season.”

On May 17, Sony announced the replacement for its NEX-C3 mirrorless Compact System Camera. The new NEX-F3 due mid-June is the same price but makes several key improvements. We got a sneak peek at this interchangeable lens camera along with the $599 Sony alpha SLT-A37, the new version of the entry-level A35 Translucent Mirror Technology DSLR also due in June. Nothing against the A37, but we preferred shooting with the F3. Let’s see if this diminutive camera delivered.

Sony NEX cameras have a distinctive gestalt — in other words, it’s hard telling them apart! They are small and have a minimal amount of buttons or logos. This CSC is very menu driven, unlike DSLRs which are peppered with dials and keys. We like pushing buttons as much as the next person, but to get the small form factor something has to give. Although the NEX-F3 is slightly larger than the C3, it’s still small measuring 4.6 x 2.6 x 1.6 (W x H x D, in inches), tipping the scales at 9 ounces without battery and card. The camera is available in silver, black or white.

Check out the accompanying images and you’ll see the NEX-F3 has very clean lines with a minimal amount of controls. The front has the Sony E Mount and the company added two lenses (18-135mm, $499, and 18-200mm, $849, both July arrivals) to its growing selection along with the cameras on announcement day. Also here is an AF Assist lamp, lens release button and a textured grip which is a more rubberized feel than the scoring found on the C3. The key icon on the front is APS-C which indicates the camera has the same size imager as much larger DSLRs. All things being equal, this means you’ll capture better photos with less digital noise than cameras with smaller chips.

The top deck has a built-in flash — a major upgrade from the C3, which had a clip-on unit. There’s also an accessory terminal and power switch, while the shutter resides on the grip. On the back are Playback and red-dot movie buttons along with a control dial with center set button and two nearby buttons. This duo interacts with icons on the adjustable 3-inch LCD screen. The functions they control vary by the mode you’re in. With such a minimal number of buttons, you’ll be living in Sony’s onscreen interface. For the most part it’s simple, but there are some adjustments that are a bit confusing. We’ve noted this since the day the first NEX arrived. It’s not the end of the world but newbies really need to go through the manual to make the most of the camera and avoid frustration.

Since we used advanced prototypes with final imaging specs — not factory-fresh gear — we can’t detail the box contents. Based on previous NEX cams, it’s safe to assume if you purchase the kit, you’ll get the body, 18-55mm lens, battery, charger, wrist strap and CD-ROM with image-handling software. Sony is in the midst of upgrading its very long-in-the-tooth Picture Motion Browser (PMB). The company is also transitioning to the Play Memories platform that will use the Cloud and work closely with PS3. Not having worked with it, there’s nothing to report at this time.

On a less sexy but perhaps more important note, the battery lasts longer than the C3. It’s a very nice increase from 400 shots to 470, so you should fire away all day without any issues. The camera also has USB charging.

Camera manufacturers try to outdo one another when it comes to offering reviewers unusual subject matter for testing. Sony definitely went over the top this round. Since the company claims the F3 can shoot 5.5 fps, they brought us to an ice rink at Chelsea Piers in New York City to photograph figure skaters. They suggested using Speed Priority mode. Let’s be honest, folks. There is no way a CSC with contrast-phase detection can keep up with really fast-moving subjects. There’s a reason sports photographers use DSLR bodies that cost thousands featuring phase detection AF. That’s not to say you can’t get a nice image or three, which we did with relatively slow-moving skaters. In Sony’s Speed Priority Mode — like most other models from other brands — the camera locks on the first image in the frame and once it moves it tries to keep up but usually can’t. Shutter speed range is 30- 1/4000th of a second.

There was also another problem. There were huge issues with backlighting with bright sun coming through the windows, making it difficult for the camera to meter properly. Once we adjusted exposure compensation, results were much better.

After shooting skaters, a side show began, literally. We’re not kidding. Sony brought in some wild members of the Coney Island Sideshows by Sea crew. And by this we mean a sword swallower, snake charmer, fire eater, a guy who puts fish hooks in his eyelids, a woman who banged nails into her nostrils — basically the people you run into every day on the NYC subway. They were far more appealing than gliding skaters. We shot primarily with the 55-210mm lens since we didn’t want to get too close to the giant yellow snake, swords and flaming torches. The lens has built-in Optical SteadyShot (stabilization) which worked nicely to eliminate blur.

As you can see by some of the images accompanying this review, the NEX-F3 captures some amazing detail. We captured the flame exhaled by the fire eater while the face makeup and tattoos of the sword swallower was spot on.

The NEX-F3 has a tilting LCD monitor so you can take shots holding the camera overhead or waist high. This came in very handy shooting over the heads of other photographers moving in closely to capture the show. As a side note, if you’re ever in Coney Island in Brooklyn, NY, you should definitely check out this collection of bizarre acts.

We shot most of our videos of these performers and weren’t disappointed by them or the quality of the NEX-F3. As noted earlier one of the major improvements of this camera versus the older C3 is AVCHD movies, rather than MP4. We used the best setting of 24Mbps, which rivals many camcorders. Given that, the colors of our clips on the 50-inch screen were very rich and accurate. Another plus is better quality audio. We cringed again hearing the hammer hit the nail as it was driven into the dreadlocked performer’s nostril. Yeow! The color of the fire eater’s balls of flame were an extremely accurate reproduction of what our eyes saw, and that’s just want you want from a camera. There was barely any shutter roll or jelly effect but the F3 took a few short seconds zeroing in on the main subject on several occasions. Annoying, but hardly a deal breaker in the overall scheme of things. Bottom line? You’ll be very happy with your videos.

Unfortunately we didn’t have the NEX-F3 for an extended period, so we couldn’t perform our standard ISO test to specify the point quality falls of the cliff. Rest assured it will but given the sensor it should be around 800 or 1,600.

With cameras like this around, you can understand why we had reservations about the Panasonic Lumix G DMC-GX1. We feel this is very nice move up from an enthusiast point-and-shoot. The small size, quality of the stills and videos and the nicely-loaded feature set make this camera a good option for anyone shopping for a CSC or entry-level DSLR this season.