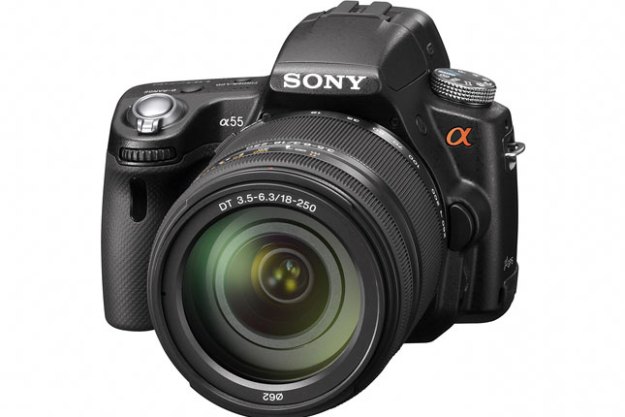 Sony’s been on a roll this year with the introduction of NEX series of cameras, and now the Alpha A55V as well as its lower-priced sibling, the A33. Although they look like traditional DSLRs, the pair is radically different which we’ll detail on the following pages. In a nutshell, they’re pretty amazing.

The 16-megapixel Sony Alpha SLT-A55V, which we tested extensively over the course of three days, has the classic black-bodied DSLR vibe, but it houses some scintillating innovations including Translucent Mirror Technology. Before getting in to that, we’ll note the camera is smaller and lighter than typical models thanks to TMT, weighing 15.3 ounces (body only), and measuring 4.9 x 3.7 x 3.3 (WHD, in inches).

Translucent Mirror Technology is one of the critical breakthroughs in this camera. It eliminates the motion of raising and lowering the mirror found in traditional DSLRs. Since the mirror doesn’t have to move up and down, the camera can be smaller. But that’s just part of it. Focusing is much more quick and accurate—especially for moving subjects. The A55V captures 10 frames per second (the cheaper 14.2MP A33 is 7). This is a mind-boggling number as most sub-$1,000 DSLRs hit 3 or 4 fps at most. If you’re a parent who really wants to capture their child playing soccer or simply running around, this camera will do it — sharply with little blur. For the record, the 16MP Canon EOS-1D Mark IV — a real pro workhorse — also shoots 10 fps but it costs $4,999 for the body. Now you can see why we’re psyched about this camera.

Like every DSLR, the key element on the front is the lens mount. In this case, it’s Sony’s Alpha system, which features an extensive collection of glass including Zeiss and Sony G series lenses. As with Canon and Nikon, you can quickly tap out buying your favorites. During the review, we used an 85mm f/1.4 Zeiss that costs $1,369, more than the body itself. The camera comes with an 18-55mm lens in the basic kit, but you definitely should upgrade when you get the chance.

There’s not much else on the front, other than a lens release button, a jog wheel on the grip for menu adjustments, and a few low-key logos. Since the camera is relatively compact, the grip was a little small for our hands, but it’s hardly a deal-breaker. On the top, you’ll find a mode dial that gives an inkling of what separates this camera from the competition. Along with the usual settings of auto, aperture- and shutter-priority, manual and scene modes, there’s one for 10 frames per second. Also new on the dial is sweep panorama, a feature first seen on Sony point-and-shoots which lets you easily take horizontal and vertical panoramas. Move through the menu and you can even take 3D Sweep Panoramas, you can watch on any new 3D HDTV using glasses. Cool stuff.

Also on the top is an auto pop-up flash, hot shoe along with video, exposure compensation and AE lock keys. As DigitalTrends.com readers well know, we haven’t been big fans of DSLR HD video since focusing is rather slow and cumbersome, since the first crop of these cams used contrast detection rather than the faster and more accurate phase detection. The A55V (and A33) are the first DSLRs to use phase detection and the results — especially the A55V we tested — are spectacular.

Things get pretty interesting on the back, too. There’s an articulating 3-inch LCD screen you can move in many positions. It’s rated at 921K pixels, and there was very little difficulty using it even in bright sunshine. The Live View is really sharp, with no smearing, thanks to the Translucent Mirror Technology and separate AF sensor. This is all pretty cool by itself, but looking through the viewfinder things get really radical. Instead of a traditional DSLR optical viewfinder (OVF), the A55V uses a Tru-Finder electronic viewfinder rated 1.44-million pixels with 100% coverage and 1.1x magnification. It’s a beautiful display, and what this delivers is terrific. Now when you change your settings such as exposure compensation you’ll know exactly if you chose the right amount because you can see the effect in the EVF. This really helps you make the most of the camera and get the shot you want. You can also record videos using the EVF rather than holding the camera at arm’s length as is the case with the competition.

Other keys on the back on fairly standard including function, a four-way controller with direct access to display, white balance, ISO (100 through 12,800), burst and center AF/set button. Playback and delete are here as well. Compartments offer access to HDMI, mic, USB and remote connections. A logo on the side lets you know the camera has a built-in GPS, in case all of the other features weren’t enough. On the bottom in the battery compartment and SDHC/SDXC-Memory Pro Duo slots. Sony recommends the fastest speed card you can buy.

We were given the SLT-A55V to use during a trip to Wyoming in order to shoot the gorgeous scenery and some very fast rodeo action. The glass in our bag included the 18-55mm kit lens, 28-75mm f/2.8 and 70-300mm f/4.5 zooms as well the Zeiss 85mm f/1.4 prime lens. Even with the smaller camera body, you’re still lugging around a lot of weight; a Sony TX5 it’s not. But if photography is your passion, you deal with the “pain.”

We shot primarily in program auto, as well as Automatic+ which is an uber version of Intelligent Auto where the camera guesses the scene in front of it and makes the appropriate adjustments. In more static situations, we used shutter priority for shots of flowing water and rodeo events such as bull riding and barrel racing.

Before getting into the results, let’s state the camera is fun to use. The Tru-Finder EVF is a real help making photo tweaks. Live View on the 3-inch display is about the best you’ll see. The menu system is logically designed, and while not an iPhone, it is simple to use. There are text descriptions as you move from setting to setting, so even new DSLR owners will have no problems picking it up and going to town. The placement of the video button so close to exposure compensation was a bit awkward for our tastes, but we’d imagine in time this wouldn’t be a critical issue. Changing the shape or placement for the next gen wouldn’t be such a bad idea. Now on to the results…

One morning we attended an abbreviated rodeo featuring bronco busting, bull riding and lots of other speedy action. It was here the 10 fps setting was put to a good test and the A55V handled it like a champ rider. We reviewed the shots on a large-screen HDTV as well as a laptop for even closer examination. The results were startling — in a good way. Colors were spot on and, just as importantly, the camera focused quickly and sharply, due in part to a new 15-point Phase Detect AF system. Reviewing the images was almost like moving frame-by-frame on a BD player. We also shot a number of 3D Sweep Panoramas of static scenes such as the rodeo stands and signs. You’ll see that directors of 3D video will have to go through a learning curve to get proper depth effects. Ours were hit and miss (mostly misses). HD video, on the other hand, was outstanding. It’s the best we’ve ever taken with the DSLR, with hardly any focusing issues, something you can’t say with the competition.

Over the next few days, we also had the opportunity to capture the beauty of the West in Grand Teton and Yellowstone national parks. What can we say? At String Lake, the reflections of the mountains in the water were magnificent. The colors at Grand Prismatic Spring were beautiful. It was here that we gave the EVF a major workout, using shutter priority and adjusting exposure compensation to get a properly exposed image with the flowing water in very bright sunshine.

We took hundreds of stills, as well as dozens of Sweep Panoramas and HD videos; we were very pleased with the results. The hardware we had access to wasn’t a final production model, since the A55V arrives in October, but Sony execs said they were very close to finished quality levels. We really didn’t have many complaints, other than the sensor heating up after shooting in hot weather and extensive use of the 10 fps and video options during the rodeo. Letting it rest for 10 minutes eliminated the problem. This didn’t happen during the days when we shot more measured scenics. Sony said this was to be expected with any DSLR used under those conditions.

The SLT-A55V is one of the most enjoyable DSLRs we’ve ever tested. The combination of 10 frames-per-second shooting, fast focusing, good image quality and outstanding full-HD video footage that beats many camcorders — for under $900 — is a package that’s pretty hard to beat. Throw in 3D Sweep Panorama and GPS geo-tagging, and the deal seems even better. The camera isn’t perfect, since no such device has ever been invented—sorry, Mr. Jobs. That said, Sony gets a big round of applause for some major advances in digital imaging. We can’t wait to see where these technologies end up next. In the meantime, if you’re shopping for a new DSLR in October when the A55V arrives, put it near the top of your list. Also consider the A33, which arrives in September. It has many of the same features, but has a 14.2-megapixel imager, shoots 7 fps, and does not offer GPS geo-tagging, but also costs $100 less.