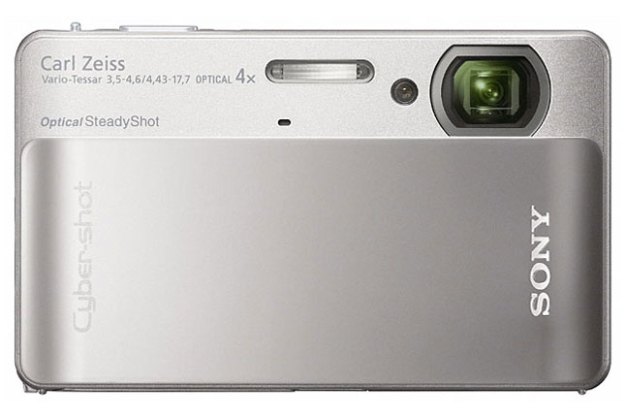 “If you’re looking for a quality point and shoot that can double as your rugged cam, the Sony Cyber-shot DSC-TX5 is a great option.”

All tough cams are not made equally – or similarly for that matter. Sony offers up the world’s slimmest rugged point and shoot, along with a very capable touchscreen responsible for most of the camera’s operations. Its most notable elements will either win users over (tiny size, touchscreen dependence) or be the reason they opt for a competitor’s camera like the Olympus TG-610.

First off, we’ll start with what the TX5 has going for it. It’s an incredibly light and slim device, with a sliding panel to protect the lens. Touch pocket cams don’t always have the luxury of being quite as convenient to carry as Sony’s – it weighs a mere 5.1 ounces and its backside is all screen. The 3-inch LCD touchscreen packs approximately 230,000 pixels in resolution. It registers touch surprisingly well and doesn’t require tap after tap after tap to get where you want to go – but always expect this to get a little more difficult underwater, or while wearing gloves.

But back to what it does well. The sliding panel not only protects the camera lens but functions as a power switch, yet another convenience in a tough cam. And it’s virtually buttonless: There is a designated power button, zoom, playback, and shutter control, but that’s it. If you’re planning to exploit everything this camera can do in the great outdoors, you’ll be happy with the lack of tiny bells and whistles you need to manipulate. Of course, if you’re unfamiliar with touchscreen controls or have an affinity for messing with the smallest details of your photo setup, it might be frustrating to have it confined to the screen. That said, the learning curve with the touchscreen controls is anything but steep.

The TX5 comes equipped with a slew of scene selectors, included “snow,” “beach,” and of course “underwater.” To get more specific, users also various white balance options and of course, more experienced photographers can alter ISO sensitivity themselves. But the camera’s real selling points are its simplicity and durability.

The TX5 comes with the camera, a startup and help guide CD, wristband, multi-connector cable, NP-BN1 battery, and battery charger.

The most impressive feature the TX5 is arguably its speed. Consumers should be able to use tough cams to their fullest abilities, and sometimes it seems like their indestructibility takes precedence over their speed. But the TX5 comes packaged with an incredibly capable sensor and processor – the Exmor R CMOS sensor and the BIONZ processor – that allow it to take 10 frames in one second at its full 10.2-megapixel resolution.

The camera’s wide-angle 4x zoom gives photographers some room to work with: It offers some variety and makes landscape shooting a possibility, which can’t be said for every pocket cam out there. The camera’s built-in scene selectors also work well, and can further simplify using the TX5 for novices. Better yet, the touchscreen interface is extremely intuitive when it comes to using and finding these presets. Just like any good outdoor-use camera should, it comes with a panorama option. It’s a different take on the feature, however: You simply select the mode and then follow the easier than easy instructions which include an arrow telling you to sweep the camera across your desired landscape. It then processes the image for you; push it to the limits and it can capture an image with a 258 degree field of view. Of course, the quality can’t be compared to costly DSLRs like the A55, but it shouldn’t have to be. The TX5 performs admirably in low light, thanks to its sensor, but be ready for some lag with the auto focus.

While the diminutive size is convenient for packing and pocket purposes, that doesn’t always mean it’s easier to use. The zoom toggle is absolutely miniature; using it with gloves or underwater could prove difficult. And sure, no one wants a weight secured to their wrist – but the TX5 feels like it could blow away. The child-sized camera might just be too small for some, and while a 3-inch display is impressive for a device so small, it’s a relatively small space to work entirely within.

If you’re specifically on the hunt for a dustproof, waterproof, shockproof, freezeproof point-and-shoot that you can really subject to the elements and push to the weather limits, the TX5 will do, but it can easily be bested by cameras without rugged specs. A slightly heavier device that doesn’t entirely rely on a touchscreen will also be easier to manipulate in your more extreme photography sessions.

That said, if you’re looking for a quality point and shoot that can double as your rugged cam, the TX5 is a great option. The touchscreen isn’t anything to be afraid of, even for those unfamiliar with it. And for general use, its size is definitely a plus, not to mention its iAuto and built-in scene options. However, for its price we’d expect some artsy filters or expanded editing capabilities.

The best iPhone tripods for 2022
Netflix sheds light on its ‘approved cameras’ for filmmakers
Insta360’s next camera could be amazing for lowlight photography
The Insta360 Sphere is a virtual invisibility cloak for drones
Nikon’s new 800mm lens for Z-mount cameras lightens the load
ReelSteady makes GoPro Player ‘reel’ useful for filmmakers
GoPro takes to the skies with the Hero10 Black Bones
How to turn off the camera sound on an iPhone
24 amazing images of our planet for Earth Day
Instagram test lets you pin particular posts to your profile
Snapchat’s pocket-sized Pixy drone takes to the skies
DJI Mini 3 Pro unboxing video drops just ahead of launch
GoPro Hero 10 Black vs DJI Action 2 vs. Insta360 One RS: Clash of the action cameras