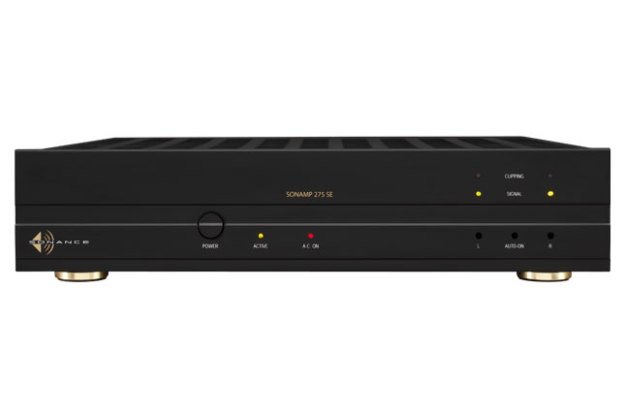 “Sonace’s industrial-grade Sonamp 275 SE pumps out clean, pristine sound without breaking a sweat, and even has the potential for upgrades.”

For 25 years Sonance has blazed a trail of innovation in custom home audio installation. Though they don’t market their products through conventional retail channels, Sonance’s reputation for designing and manufacturing excellent products is very well known amongst custom home audio installers. Recently, we had the opportunity to evaluate and experience Sonance’s new Sonamp 275 SE with BBE Sound Enhancement. It’s a 2-channel amplifier with built in sound processing that promises to deliver better fidelity at lower volumes and even improve the sound of lossy digital music files.

Pulling the 23 lb. 275 SE from its packaging gave us our first hint at its stellar build quality. Peering beyond the perforations in the rugged chassis, we see a stout, donut-shaped toroidal power transformer and a bay of very large, high-quality capacitors. The rest of the electronic innards appear to be laid out in a modular fashion which we later discover is part of the 275 SE’s upgrade appeal.

On the back of the unit we find a pair of RCA inputs and outputs, two pair of high quality binding posts, two replaceable fuses (one for each channel) a 12-volt trigger connection, a receptacle for the power cord and a switch that adjusts the BBE sound processor’s level of enhancement from off to +6db or +12db. The front of the unit is kept clean with only a power button and a few LED’s to indicate power, signal reception and clipping status. Sonance has gone so far as to clearly label what connections need to be used in order to bridge the amp in order to double it’s output power in mono mode. For those with little audio installation experience, this is a very thoughtful feature.

In the box with the 275 SE you’ll find a thick, grounded 6ft. power cable and a product information sheet.

Unlike an A/V receiver or Preamp/Processor, a dedicated audio amplifier’s job is relatively simple: Take a signal and make it useable to a speaker. As such, there is usually little to discuss when it comes to an amplifier’s features. The Sonance 275 SE is little different, though. While most amplifiers simply boost the signal they are fed, the 275 SE employs BBE technology to improve the sound as it is amplified. BBE processing differs from tone controls and graphic equalizers in that it doesn’t just boost or trim certain parts of the frequency spectrum. Instead, it attempts to time-align the high frequencies with the midrange and bass frequencies so that all of the frequencies get to your ear at the same time. In addition, it boosts the bass output a little to help maintain balance in the sound. Practically speaking, BBE attempts to make the music you listen to sound more natural and “Live”, no matter the volume. In theory, it should also restore some of the high-frequency balance of lossy MP3 files.

The 275 SE’s inclusion of BBE is not the only trick in its bag. The processors are upgradeable because Sonance has made them a modular piece of the amp. To upgrade, simply remove the chips and replace them new processors. It’s a plug and play operation that anyone can perform. Having the ability to customize your amp’s performance in this way is extremely handy for those with particular tastes or changing performance needs.

The 275 SE’s rated power is 75 watts into 8 ohms, but the amp can be bridged to output up to 250 watts into 8 ohms. This amp is also stable down to 2.7 ohms, meaning it can handle a string of speakers wired in parallel or simply take care of a pair of very low impedance speakers. This makes the 275 SE equally comfortable powering speakers all around your home or powering high end home theater speakers in your dedicated room. We should also point out that the 75 watt rating seems to be on the conservative side. During our performance evaluations, we noticed that the 275 SE had plenty more to give after we had reached our peak power needs.

To test the Sonamp 275 SE, we used a varied compliment of speakers, pre-amps and DAC’s. For this evaluation we utilized Aperion Audio’s 633-T, 632LR and 6-IW speakers, Headroom’s Micro DAC and Micro Headphone amp (as pre-amp) a Dynaco PAT-4 pre-amp, an iPod touch, a laptop computer loaded with both compressed and uncompressed versions of the same tracks and a Sony BDP-N460 Blu-Ray player as a disc player.

We started our testing with the BBE sound enhancement feature turned off. When listening to uncompressed tracks through the 275 SE without BBE, the sound was exemplary. Paired with the Aperion 633-T speakers, the 275 SE exhibited tight authority in the bass department, a very lifelike midrange and very sophisticated treble that yielded a great deal of detail without any stridency.

While the 633-T is a relatively easy speaker to drive, the 632-LR (bookshelf) requires a little more muscle. The 632 uses a single 6.5” bass driver in conjunction with a generously sized cabinet and equally large port on the rear. With lower powered amps, the 632 doesn’t reach its full potential- usually bass is a little muted and vocals lack a certain presence. With the 275 SE, however, the Aperion 632 sung loud and proud with authoritative and musical bass response and equally impressive midrange and high frequencies.

When driving the 6-IW (in wall) speakers, we noticed a considerable improvement in sound over our stock Onkyo A/V receiver, primarily in the midrange where vocals and wind instruments had improved clarity and realism.

As we changed source components and pre-amps, we noticed the sonic signature changed as well. When running directly off of our iPod touch, the sound quality suffered a great deal. This came as no surprise, since the headphone output of the iPod touch is not a reliable or quality source, but the experience served to prove that the 275 SE will simply amplify whatever it is given. This seemed like a good opportunity to engage the BBE sound enhancement processor.

We ran the same track back using the iPod touch as a source but this time with the BBE engaged at the lowest setting. We immediately noticed a change in the high frequency response. It was much more forward in the mix than it had been previously but the timbre of the highs changed as well. We noticed that the drummer’s cymbals on our test track seemed to have lost their realism and now sounded forced and artificial. We repeated this A/B comparison with a few more tracks and noted the same change to the treble response. In each case, the sound seemed to lose some of its organic, raw texture and became somewhat sterile.

We then switched over from our floor-standing speakers to the in-walls and ran the same comparisons once more. This time, the difference in the high frequencies was less stark. In fact, given the 6-IW less refined treble response, the BBE seemed to add some sparkle back into the sound. Additionally, the BBE seemed to keep a better balance among the bass, midrange and treble at lower volumes than our reference received did. At the end of our testing, we came out feeling that the BBE processing was a an asset in dealing with less than high-end speakers but unnecessary with high performance speakers.

Overall, we found the Sonamp 275 SE to be a very capable amplifier with a great deal of reserve power at the ready. During loud, explosive passages, the Sonamp performed effortlessly and provided a very dynamic, detailed sound. Incredibly, the Sonamp remained cool to the touch, even during long periods of stress- an attribute that should benefit those with tight, enclosed installations with little ventilation.

The Sonamp 275 SE from Sonance is an exceptionally well built amplifier with enough high current power to support almost any home audio application. The included BBE processor comes in handy with in-wall, in-ceiling and lesser quality speakers but seemed to color the sound when used with high performance speakers. We feel the 275 SE’s performance was at or above par with other high-end competitors and is a rock-solid choice for those that need solid power and pristine audio reproduction.

Even Microsoft is running an unsupported Windows 11 PC